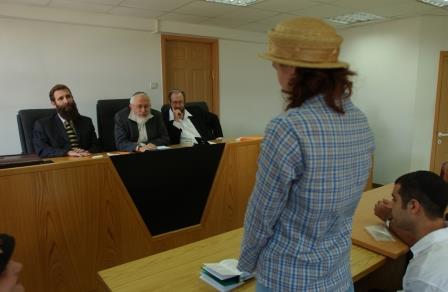 Background: The question of conversion has been on the national agenda since the beginning of the influx of immigrants from the Former Soviet Union in 1989, of which many individuals were not considered Jewish by halakhic (Jewish legal) standards. In the past few weeks, this issue has come to the fore in stringent halakhic rulings. The ongoing conversion challenge calls for a revolutionary solution: modifying the requirements for those who wish to join the Jewish People. Instead of converting only those who commit to observing the entirety of halakhic law, one option would be for converts to adopt the fundamentals of Judaism. It would be best if the religious establishment took it upon itself to institute adaptations of this nature, but if it does not, it is incumbent on the State to override the religious establishment through legislation in order to resolve this issue.

The issue of conversion has been on the national agenda for twenty years, and various problems related to it have arisen time and again, as indicated by some recent headlines:

The reason for the considerable attention being given to the issue of conversion is clear: when the Soviet Union collapsed 20 years ago, a large wave of aliyah from the FSU began and has continued ever since, although the number of new immigrants has declined. Over one million immigrants have arrived in this remarkable wave of aliyah. However, roughly 320 thousand of these immigrants are not Jewish according to halakhic standards. Their aliyah was made possible by a 1970 amendment to the Law of Return, which allowed the immigration and granted citizenship to the non-Jewish spouses of Jews, as well as to their children (and children's spouses) and their grandchildren (and grandchildren's spouses). This policy was an attempt to avoid the tragic situation in which families are torn apart when only one member of the family is able to immigrate to Israel, leaving the others behind.

The arrival of these immigrants does not obligate Israel to convert them, inasmuch as the service of the Druze and Bedouin populations in the Israel Defense Forces is not meant to make them Jewish. On the contrary, in the case of the non-Jewish immigrants, one could claim that we have already done enough for them by allowing them to immigrate to Israel, and by granting them Israeli citizenship. Yet, we must consider several significant challenges that these individuals will face over the course of their lives as non-Jewish Israelis: how will these immigrants marry (today, Israeli law recognizes only religious marriages, and a wedding between people belonging to different religions is impossible); how will they be buried (almost all interments in Israel are religious); and, on a fundamental level, what is their identity: if they are not Jewish, what are they? Russians? Ukrainians? If we define them as Israeli on their identification cards, we might consider that the question of their identity is solved; but at the same time, we will have hatched a new national identity that would encompass all Israeli citizens by defining national identity according to citizenship. In other words, Israel would no longer be defined as the Jewish State, but rather as the Israeli State.  Furthermore, many of these immigrants considered themselves Jewish in their countries of origin, and sometimes even suffered hostility and humiliation as a result, and now, precisely in the Jewish State, they are told that they are not Jewish. For these reasons, it is advisable that the State act as quickly as possible to officially complete the process of officially embracing interested "non-Jewish Israelis": the State should encourage conversion.

The immigrants' hesitation to convert stems, of course, primarily from the formidable condition of their conversion: the mandatory acceptance of the yoke of halakha in its entirety. Immigrants tend to view their Jewishness in a national sense, which includes a few traditions at most (usually related to family or national traditions, and not necessarily to religious observance—the Passover Seder, the Yom Kippur fast, etc.), and it is unclear to them why the religious establishment's form of Judaism requires them to accept an entire system of religious obligations. This incongruity is particularly poignant when they see that their secular neighbors' "Jewish identity" does not hinge on adherence to the same stringent requirements.

Indeed, the issue of conversion touches on the fundamental question of the nature of Jewish identity, which encompasses a combination of national and religious components. On one hand, it is clear that there is a national element, as is customary among other peoples—this includes our distinct language and the territory from which we were exiled and to which we aspired to return. On the other hand, there is clearly a religious element to our Jewish identity—someone who is Jewish by nationality cannot be Christian or Muslim by religion; moreover, almost all the symbols of our national heritage (at least until the founding of the Zionist movement) are rooted in religious traditions: the Sabbath, holidays, bar-mitzvah, circumcision, etc.

The question ultimately becomes one of "the chicken and egg"—which is the fundamental element of Jewish nationality, and which stems from it? In other words, is a Jew a member of the Jewish people and, thus, obligated by halakha; or is a Jew someone who is obligated by halakha, which is the basis of his or her membership in the Jewish People. An examination of Jewish history will clearly prove that the first position is correct. The children of Israel had already become a nation upon their Exodus from Egypt, even before receiving the Torah. Throughout the First Temple period, most were idol worshippers, but the name of Israel was never revoked from them; and even the prophet Elijah, who was extremely fundamentalist regarding idol worship and who attacked King Ahab for nationalizing idolatry, did not cease to show respect to Ahab as the King of Israel.

And if this was the case in ancient times, all the more so in modern times, when most Jews are not observant; even the strictest halakhic authorities have never ceased to view the secular majority as an inseparable part of the Jewish People. Certainly Zionism (including religious Zionism) considers the basis of Jewish identity to be national. If our justification for nationhood was religious, our claim to the State of Israel would be invalid because the world consists of nation-states, not religion-states (apart from the Vatican, which is recognized as a state only in a symbolic sense and not as "the Christian State," but merely as the Papal seat).

Therefore, if the foundation of Jewish identity is national, the nature of conversions—the process of joining the Jewish People—should be first and foremost of a national character. In addition, a major discrepancy between the criteria that are used to define those who are born into the Jewish People as opposed to those who are interested in joining them is unwarranted. Naturally, there should be only one difference: for those who are born Jewish, the assumption is that their culture and identity are Jewish, and their Jewish identity will be invalidated only if they actively separate themselves from them. Conversely, with regard to those who join the Jewish People, until they prove that they actively associate with Jewish culture, it is assumed that they retain their previous identity.

What would be the minimum requirement for this type of "active association" (indeed, the minimum and not the maximum—since we are referring to immigrants who are descendents of Jews, otherwise they would not be eligible to the right of return)? This would seem to be the appropriate list of criteria: first and foremost, the converts must prove that they do not adhere to any other religion and, particularly, not another monotheistic religion—Christianity or Islam. Second, they must prove that they have ample knowledge of Jewish tradition, thereby establishing that they understand the culture that they are adopting. As far as practical lifestyle is concerned—their acceptance of the Jewish calendar should be enough, i.e., they celebrate Jewish festivals (the Sabbath, Pesach, Hanukah, Yom Kippur, etc.), even if they do not meticulously adhere to all the pertinent halakhic regulations; clearly, we cannot accept a convert who celebrates Christmas or St. Peter's Day. It is likewise fitting that we require the convert to adopt the Jewish life-cycle rites: circumcision, bar-mitzvah, Jewish wedding and Jewish burial ("Jewish" in the inclusive sense, which is not limited to Orthodox interpretations).

If acceptance of these principles, which per se are not obvious to some of the immigrants, would sufficiently satisfy the leading halakhic figures, it seems that a broad consensus on the question of conversion could be reached. However, if the halakhic authorities are unwilling to adjust their position at all, the State is obligated to override their position and to independently resolve this issue. It is clear that the State cannot determine "who is a Jew" from a religious point of view, but it can—and should—determine who it recognizes as Jewish in order to register its citizens in the population registry and to issue identification cards (and indeed, I believe that nationality should be reintroduced in Israeli ID cards after having been removed in 2002 in response to complaints by the Orthodox community that the Supreme Court had registered as "Jewish" many  individuals who had undergone non-Orthodox conversions).

The State can and should determine that for its own purposes (such as the Law of Return), anyone who accepts the Jewish calendar and who does not adhere to another religion is considered a Jew, or alternatively (in an attempt to avoid too many details), anyone who has been accepted as Jewish by a recognized Jewish community—the assumption is that the minimum requirement of some of these communities is the acceptance of the Jewish calendar and Jewish life-cycle rites (communities that require less, would most likely not be recognized). Clearly, liberal religious or civil marriages and burial rites must be offered to those who are not recognized as Jewish by the Rabbinate and to those who are not recognized by the State, but who are allowed to live in Israel and are granted Israeli citizenship.

To summarize, the tough stance taken by the Orthodox establishment in Israel has already resulted in a de-facto split between religion and state with regard to the Sabbath and marriage. Although businesses and cultural establishments are officially closed on the Sabbath, and marriages are conducted exclusively by the Rabbinate, we are all aware that this is, in fact, not the case (there are loop holes in both cases). The religious establishment—the ultra-Orthodox camp, obviously, but also, unfortunately, a major segment of the national religious camp—prefer to bury their heads in the sand: they are willing to accept the collapse of the public standing of Judaism in Israeli life rather than reach a compromise. If this policy persists, the loss of the public status of Jewish tradition will trickle down to the issue of conversion as well, and additional barriers dividing religion and state, and religious and secular, will rise before our eyes. As in the case of the Sabbath, the compromises concerning the conditions for joining the Jewish People that may be within reach today, may be beyond reach tomorrow.

Tags:
Conversion to Judaism,
marriage,
The Rabbinate,
religion and state,
Religion and State