The end of the "Great Rabbis" (Gdolim) era: the future of Shas and Mizrachi ultra-Orthodoxy – Conference (Part of the ultra-Orthodox in Israel Program at the Israel Democracy Institute) 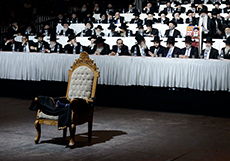 Dr. Lee Cahaner, the Israel Democracy Institute and Oranim College: "We must understand the differences between the various groups within ultra-Orthodox society, especially in light of the public debate on the separate tribes in Israeli society (ultra-Orthodox, National Religious, Secular and Arab) – the general public is largely unaware of these divides."

Rabbi Yosef Miller, The Van Leer Jerusalem Institute: "The demand that political authority acquiesce to Torah ruling is not an outcome of the sages’ authority, rather their position at the top of the political pyramid is integral to the ideal that Torah considerations usurp all others. While ultra-Orthodox society accept that decisions are influenced by wealth and power, in a deeper sense, they do not see this as the Torah’s view."

Prof. Benjamin Brown, the Israel Democracy Institute and the Hebrew University of Jerusalem: "From the 1950s onwards, Orthodox Judaism has ceased to exist – rather there are religious Zionist and ultra-Orthodox groups that have different political parties, education systems and even different media."

Avi Mimran, Radio Kol Hai: "The Sephardi/Mizrachi has a different way of life and a different agenda. When examining the question of whether Shas has succeeded, one must remember that the ultra-Orthodox Sephardi educational system did not exist in the past rather only the Ashkenazi education system existed. There is a shepherd to guide the ultra-Orthodox Sephardi society even after the death of Rabbi Ovadia Yosef. It is true that Shas does not have the tools today to reach teenagers like it used to, and it definitely needs to adopt new tools, but it is certainly possible because the values and beliefs exist, just as they existed during the period of Rabbi Ovadia Yosef."

Daniel Ben Simon, a journalist: "Shas is a missed opportunity. My parents who voted for Shas at the time - returned to vote for the Likud, and Shas was unable to represent a large public of a million and a half citizens who needed representation. If Shas returns to the 1980s, becomes a moderate and liberal form of ultra-Orthodoxy in the Sephardi tradition, starts dealing with issues on the agenda, and tries to incite a revolution among those who it has lost, it will succeed – but currently the Shas party has a tendency to partner with the extreme Ashkenazi ultra-Orthodoxy.

Dr. Avishai Ben Haim, Journalist and Commentator on ultra-Orthodox society for Channel 10: "Rabbi Ovadia Yosef and Aryeh Deri took it upon themselves to extricate the oppression and the ethnic demon, regardless of the price they paid. What destroyed Shas was a propaganda campaign that turned the party into something contemptible. For example, a year before the saga of the supermarket closure bill, Deri said that secular people in Tel Aviv should be responsible for the sanctity of the Sabbath (rather than using the legal sanctions available to him as as Minister of the Interior) and everyone ignored this statement in order not to let Sephardi moderation raise its head. It was the Ashkenazi elites who destroyed the Shas party."

Dr. Nissim Leon, the Israel Democracy Institute and Bar-Ilan University: "Shas’ existence is threatened by religious Zionists, who are developing communities in Israel's periphery by integrating Sephardi Jews into higher education and key positions. “No Shepherd” does not necessarily mean that there is no real leader, but there is no mythological leader, and there is no doubt that this is a challenging time for Shas in terms of its appeal to the public."

Dr. Tehila Kalaji, the Israel Democracy Institute and Ben Gurion University: "Rabbi Ovadia Yosef supported the ultra-Orthodox college. From a feminine aspect, the female power that was revived by local initiatives has been lost since the death of Rabbi Ovadia Yosef. "
Dr. Neri Horowitz, Agora Policy: "From a political perspective, Shas' first revolution was a historic success, the second revolution was a socio- cultural revolution, and its success is debatable. The leaders of Shas have yet to understand the price of allowing “wheelers and dealers” to run the Maayan Torah education system. In doing so, they alienated many of their voters who responded by deserting the education system - which severely weakened the party.

Prof. Yedidya Stern, Vice President of the Israel Democracy Institute: "The most significant issue at hand that we all must work towards is ensuring that partnerships between different segments of the Israeli public will be rooted in mutual respect and recognition. It is clear that we have reached a critical point in time – the impending decision regarding ultra-Orthodox enlistment in the IDF, integration in the civil service and more – these matters and others must be dealt with intelligently and with care.