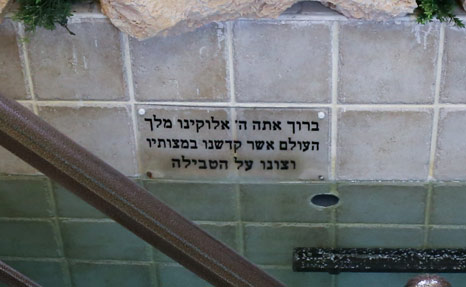 The expected election of Hillary Clinton as the next president of the United States will affect Israel in a great number of ways, but one of them is rather different and unexpected: Her election will certainly influence the question of religion and state here.

The ultra-Orthodox (Haredi) monopoly over the Chief Rabbinate and the country's religious services, along with the Haredi veto on any changes in the status quo vis-à-vis religion and state, may seem like an internal Israeli affair – but they are not. Members of the Jewish community in the United States have a great interest in what is going on in Israel in the realm of religion and state, mostly on issues such as conversion, marriage and divorce, to the point where many have stated that they identify less with Israel because of these issues. Not the occupation, not the relations with the Obama administration – but the controversy over a mikveh (ritual bath) in Jerusalem.

Why is this so important for them? Most American Jews identify themselves as Conservative or Reform; only about 10 percent of them identify as Orthodox. The members of the Conservative and Reform movements have no doubt that they live full Jewish lives – maybe, in their view, even more than Orthodox Jews. But in the eyes of the Israeli Orthodox establishment, they are beyond the pale. Many major Israeli rabbis consider the Reform movement to be “worse than the Christians.” Indeed, Chief Sephardi Rabbi Yitzhak Yosef has declared that they “are undermining the Jewish identity of the country.”

This does not end with declarations. On the official level the religious establishment in Israel does not recognize the non-Orthodox denominations and is waging an all-out war against them. Weddings and divorces conducted by the other movements are not recognized in the country, nor are their conversion processes. The tone and liturgy of their services are anathema to our U.S. Orthodox rabbis, and this is the cause for the latter's battle against Reform prayer at the Western Wall. Recently, even the use of mikvehs by non-Orthodox Jews, to complete their conversion process, has become a point of controversy.

American Jews, even those who do not identify with non-Orthodox denominations, find it very difficult to accept the power the Haredi establishment wields in Israel, as well as the fact that virtually every non-Haredi alternative is crushed. The Americans' closeness to Israel stems from the feeling that they have shared values, among other things, and religious pluralism is a central one for them.

For many, this situation is insufferable. The members of the older generation in America protest, but maintain their connection with Israel and continue to support it. In comparison, the members of the intermediate generation, and certainly the younger generation of Jews, are no longer willing to ignore what is happening. As far as they are concerned, Israel’s policies on matters of religion and state, the lack of religious pluralism here and the fierce war being conducted by the religious establishment against what the Americans consider to be an important part of their Jewish identity – these constitute a reason for a fight and for reduced support for Israel, even to the point of cutting off contact with the Jewish state.

In any event, Reform and Conservative Jews in the United States are not sitting by and doing nothing. For years these movements have been investing in developing their own infrastructure in Israel and in activities aimed at achieving recognition of their rights here. In recent years, a few coalitions of donors and Jewish Federations have arisen that have agreed on the goal of advancing religious pluralism in Israel. By means of contributions earmarked to benefit Israeli civil society, these groups have tried to promote issues such as civil marriage, rights for all Jews, changes in the existing system of religious services, and more.

The second way that is open to American Jews who seek to put pressure on Israel is through the U.S. administration. Until now, use of this method has been very limited, if anything. But if Hillary Clinton is elected, this will change. Primarily, people take care of themselves and their families first. Clinton's daughter Chelsea is married to a Reform Jew and therefore her children are considered Jewish according to that movement’s interpretation. But they are not recognized as Jews in Israel by the Orthodox rabbinical establishment. So, all of a sudden, the issue of recognizing Reform conversions will become a personal problem for the president of the United States.

In addition, Hillary and Bill Clinton have a large number of Jewish supporters and donors, the vast majority of whom are Reform or Conservative. And these are the same Reform and Conservative Jews who are so angered and outraged by the "religion vs. state" situation in Israel. It is easy to see how these two groups together will be able to bring a future President Clinton to a point of friction with Israel over these issues.

Will Clinton cut U.S. military aid to Israel because of a mikveh in Jerusalem? It's unlikely. But there is no doubt that as president, that subject will land on her desk; in any event, it will become another area of dispute between her and the Israeli leadership.

Maybe, just maybe, Hillary Clinton will be a solution to the issue of religion and state in Israel.

This op-ed originally appeared in Haaretz.