Conversion is a central theme of the upcoming holiday of Shavuot when the biblical story of Ruth the Moabite – widely considered the first convert to Judaism – is traditionally read. In the spirit of the holiday, we decided to examine what types of relationships Jewish Israelis are ready to have with non-Jews. We also looked into what Jewish Israeli think about the topic of conversions in general and the conversion process in Israel in particular. 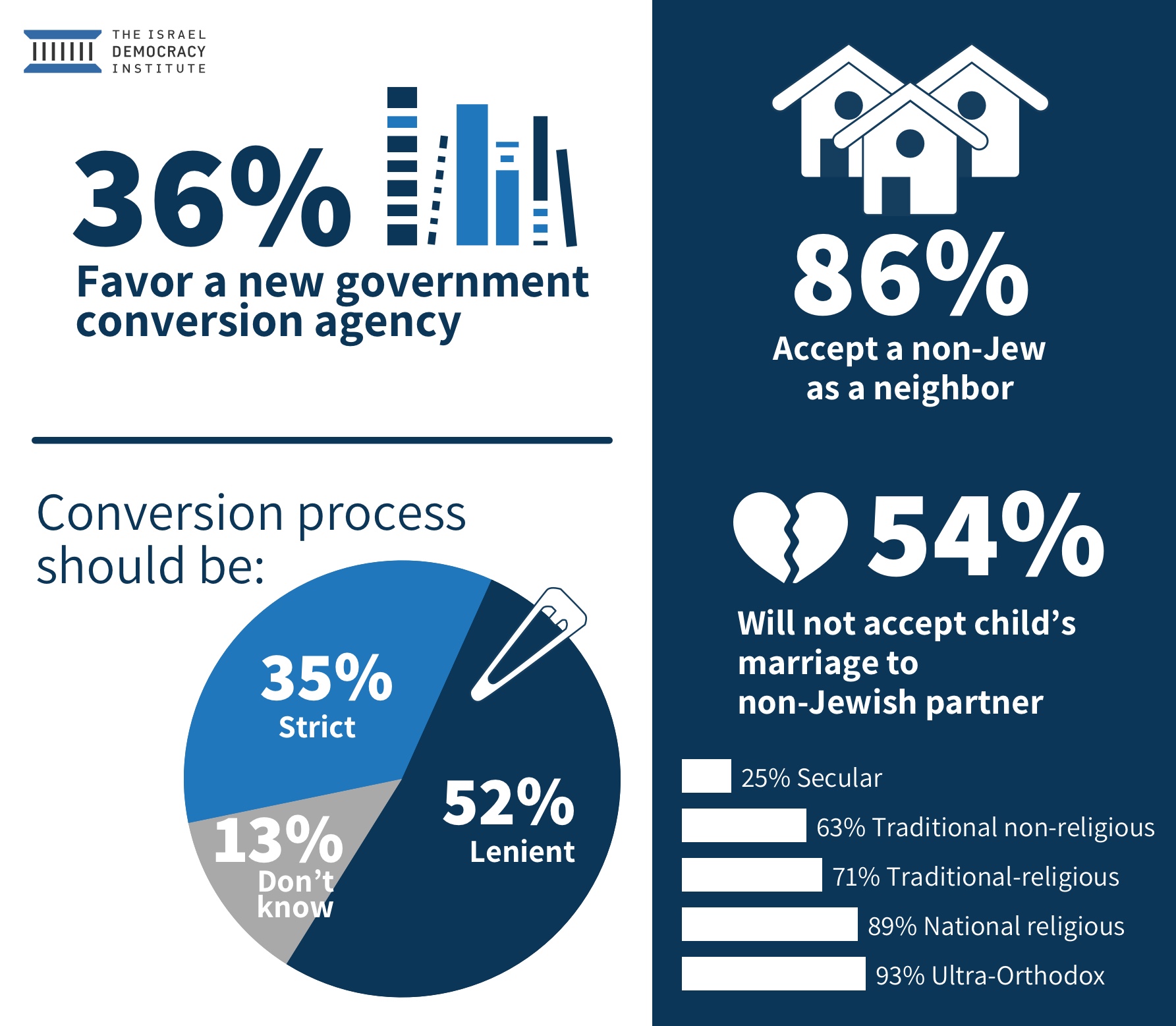 Joining the Jewish people is a central theme of the Biblical story of Ruth the Moabite read on every Shavuot holiday. With the holiday quickly approaching we checked what relationships Jewish Israelis are ready to have with people who are non-Jewish according to Halacha (Jewish Law), as well as the conversion process in general and specifically --the current conversion process in Israel in particular.

What does conversion to Judaism mean?

However, there is a large difference between different groups along the ultra-Orthodox---Secular spectrum: for all groups, except for secular Jews, the largest group (a majority among ultra-Orthodox – 73%, and Traditional-religious – 57.5%) believes that conversion means joining both the Jewish people and Jewish religion. Nevertheless, among secular Jews, the largest number answered that converts are only joining the Jewish religion.

Should we make conversion easier or harder?

Our question: "In your opinion, should conversion be performed leniently (as far as possible within the boundaries of Halacha) in order to enable more converts to join the Jewish people, or should conversion be performed very strictly even if it means there will be fewer converts?" Overall, a small majority (52%) expressed their preference for greater leniency, while a minority (35%) preferred a stricter process.

However, as expected dividing up the sample by groups along the ultra-Orthodox – Secular spectrum shows, that the religious groups are more negative while the more secular groups (Traditional non-religious and Secular) are more in favor of making the process easier.

Examining the responses of the groups along long the ultra-Orthodox - Secular spectrum reveals that the Orthodox conversion court overseen by the Chief Rabbinate received the highest level of support from ultra-Orthodox and religious respondents (89% and 66.5% respectively). Among the Traditional-religious, the Traditional non-religious and the Secular most supported the establishment of a new state conversion system that would be regulated by the law.

Our question: “The conversion process in the IDF is simpler and briefer. So far more than 10,000 soldiers have been converted in its framework. In your opinion: The IDF conversion system should be expanded; be left as it is; cut back; shut down. The data indicate that only the ultra-Orthodox want to shut down or cut back the conversion system in the IDF. All other groups support expanding it.