A unity government (or “grand coalition”) is a special type of coalition with a particularly broad base, including all the major parties represented in the parliament and can have a range of ramifications on the political system. This explainer outlines how its works in Israel and around the world. 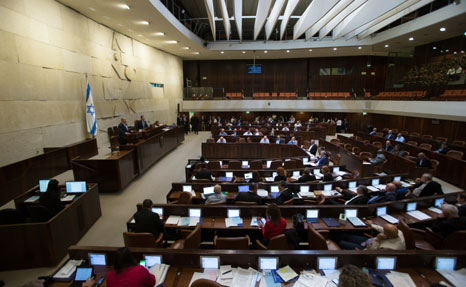 The political history of countries ruled by coalition governments provides us with many examples of broad national-unity governments. Most of these were governments based on a national consensus and created in response to an acute military or economic crisis. A unity government (or “grand coalition”) is a special type of coalition with a particularly broad base, including all the major parties represented in the parliament. Crises are an important –but not sufficient –motivating force for forming a unity government, since the emergence of a unique political situation, in and of itself, is an important catalyst of the parties’ willingness to participate. A unity government creates a base of solidarity and provides the political system with a “time-out”, during which important decisions that fall into the national consensus can be made.

The very existence of a large coalition in a coalition-based parliamentary regime can have a range of ramifications on the political system. The government, based on a supermajority, has significant power and what is left of the parliamentary opposition becomes tiny and powerless. Such a situation neutralizes parliamentary responsibility; the executive branch—which takes control of the balancing function of parliamentary debate and activity—views the legislative branch as a mere “rubber stamp”. On the other hand, because the size of the coalition reduces the need for strict discipline, members of the coalition may be able to collaborate with opposition parliamentarians in a way that would not have been possible if the relative sizes of the two blocs were more balanced. Another result inherent to the existence of a grand coalition is that although the broad agreement provides a stable basis for extreme steps during a crisis, it is also liable to paralyze the government, because disagreements among the partners about other essential matters reduce the political system’s ability to take decisions.

Moreover, a grand coalition is not really compatible with core elements of democracy, such as partisan competition, free choice between ideological and policy alternatives, checks and balances between the executive and legislative branches, and the independent identities of the political parties.

Grand Coalitions throughout the World

During the Second World War, national coalitions were formed in several European countries to deal with the military crisis. The most famous was Churchill’s war coalition in Britain, which drew on almost all the country’s leading politicians and enjoyed the support of the public at large. What makes this unity government unusual is that Britain does not have an extensive history of coalition governments.

In Switzerland, a coalition of the country’s four main parties has held consecutive power since 1959. Seats in the government are allocated among its partners according to a fixed formula. The government is headed by the president of the council of ministers, who serves for a single year. Switzerland is a direct democracy that calls on citizens to decide essential issues through referenda. So its grand coalition is not a response to political crises, but rather reflects the country’s pluralistic nature.

Between 1945 and 1966, Austria was ruled by a grand coalition of its two main parties, the center-right Austrian People’s Party (German: Österreichische Volkspartei; ÖVP) and the center-left Social Democratic Party of Austria (Sozialdemokratische Partei Österreichs, SPÖ). This coalition was established to rehabilitate Austria after the events of the Second World War. In 1987, a new grand coalition was formed to achieve legitimacy for unpopular economic and social steps. The coalition was formed again after the 1990 elections and remained in power after the 1994 and 1995 elections. Unity governments also served between 2006 and 2017.

A grand coalition of the two major parties, charged with restoring confidence in the German economy after a major crisis, governed West Germany from 1966 to 1969. Since 2005, unity governments have been the dominant pattern in united Germany, accounting for three of the four governments formed. The growing strength of radical parties (the Left Party on the extreme left, and the Alternative for Germany or AfD on the far right), which are not considered legitimate governing partners, forced the two large rival parties to join forces and collaborate, despite their fundamental disagreements.

In Italy, the Democrats (PD) on the center-left and the People of Freedom (PdL) on the center-right formed a unity government in 2013, but it lasted less than a year.

In other democracies, the political tradition and culture in effect, rule out cooperation by rival parties in a unity government. In these countries (Sweden, Denmark, Canada, Australia, Ireland, and Spain), minority governments are more common.

Israel has had three national-unity governments. In general, they were characterized by a strong capacity to take action in the face of a national crisis on the one hand, and by an inability to act on issues outside the national consensus—on the other. The national unity governments of the 1980s were formed in the wake of a parliamentary deadlock, rather than to counter a national crisis; they were the result of a lack of consensus rather than of a consensus. In the 1990s and 2000s, changes in the party system and the weakening of the large parties meant that the classic form of a unity government as a coalition of the two alternative ruling blocs became devoid of any meaning.

1. The Government of National Unity

On the eve of the Six Day War, a National Unity Government was formed to deal with the existential crisis threatening the country. In fact, to some extent, this was an ad hoc expansion of the incumbent government. After the 1969 elections, the unity government survived as a coalition government for a year, until the end of the War of Attrition.

This government, against the backdrop of rampant inflation, was created after the two main parties, the Likud and Labor, emerged with the same number of Knesset seats after the election. To facilitate its operation as a unity government, unique arrangements were adopted, such as an inner cabinet in which each of the two parties enjoyed a veto, and rotation of their leaders in the office of Prime Minister. . The unity government’s major achievements were putting an end to the galloping inflation and withdrawing the IDF from most of Lebanon to a security zone along the Lebanese border.

3. The Unity Government Formed after the 1988 Election

This government was formed as the “the lesser of two evils” The polarization of the Israeli public as reflected in the election results, generated a wave of public support for a national unity government. Unlike its predecessor, this government was not based on parity or rotation of the premiership. It held office for two years before being dissolved, as a result of the so-called “Stinking Deal”, and was succeeded by a narrow Likud-led government.

The direct election of the prime minister, in effect from 1996 through 2001, splintered the large parties and altered the partisan system to such an extent that since 1999 it is has become difficult to identify two large parties that are real alternatives over a significant period of time. . This change emptied the term “unity government” of any meaning. Instead, Israel was governed by a succession of coalitions that lacked an ideological common denominator that is, based on parties from both sides of the political divide. It sometimes was also the case that parties that were ideologically in the “middle” were not included.

The coalitions formed under the first two prime ministers elected in direct elections (Netanyahu in 1996 and Barak in 1999), were unstable and lasted only a few years.

Ariel Sharon, the winner of the 2001 direct election, inherited the fifteenth Knesset, the most fragmented in the country’s history, and formed a coalition that was a sort of an expanded unity government (it included the Likud and Labor. Shas, Yisrael ba’Aliya, Am Echad, the Centre Party, the National Union, and Yisrael Beitenu). After the 2003 Knesset elections, a center-right coalition was formed and served until January 2005, when it was replaced by a coalition of the Likud, Labor-Meimad, and United Torah Judaism (which could be considered a true unity government), whose main raison d’être was the implementation of the Gaza Disengagement

After the 2006 elections, Kadima (29 MKs), headed by Ehud Olmert, joined with Labor (19), Shas, (12), and Yisrael Beitenu (11) in another coalition without a common ideological base. In 2009, Netanyahu formed a similar coalition, which included Labor, while Kadima, despite its being the largest party in the Knesset, remained in the opposition. In the present decade, when the Knesset is dominated by medium and small parties, the concept of a unity government has become meaningless; the governments, all headed by Netanyahu, were coalitions based on the large parties (such as the Likud and Yesh Atid in 2013), but not on the two rival anchors of the system, so that they cannot be considered unity governments.

The April 2019 election marked a departure from this pattern, as the Likud and Blue and White together emerged with 70 seats, recreating (perhaps only temporarily) a clear two-bloc structure and offering the possibility of a unity government.

The question of a unity government continues to resurface in the Israeli political arena and public discourse. Unlike the past, however, when the idea of a unity government was floated mainly in response to a national crisis, it now seems to be personal interests that are pushing the parties in this direction. That said, a security or economic emergency could once again motivate the two current large parties to join forces.

Tags:
Elections and Parties,
Coalition,
Basic Law: The Government,
forms of government,
the government,
Political Reform,
Center for Governance and the Economy