The first day of the annual conference of the Center for Security and Democracy was held today at the Israel Democracy Institute (IDI). The conference focused on fundamental questions facing Israel in terms of civil-military relations in Israel, the influence of the political system on the IDF, and the possibility of abandoning the 'People's Army' mandatory conscription model and the transition to a professional all-volunteer military. 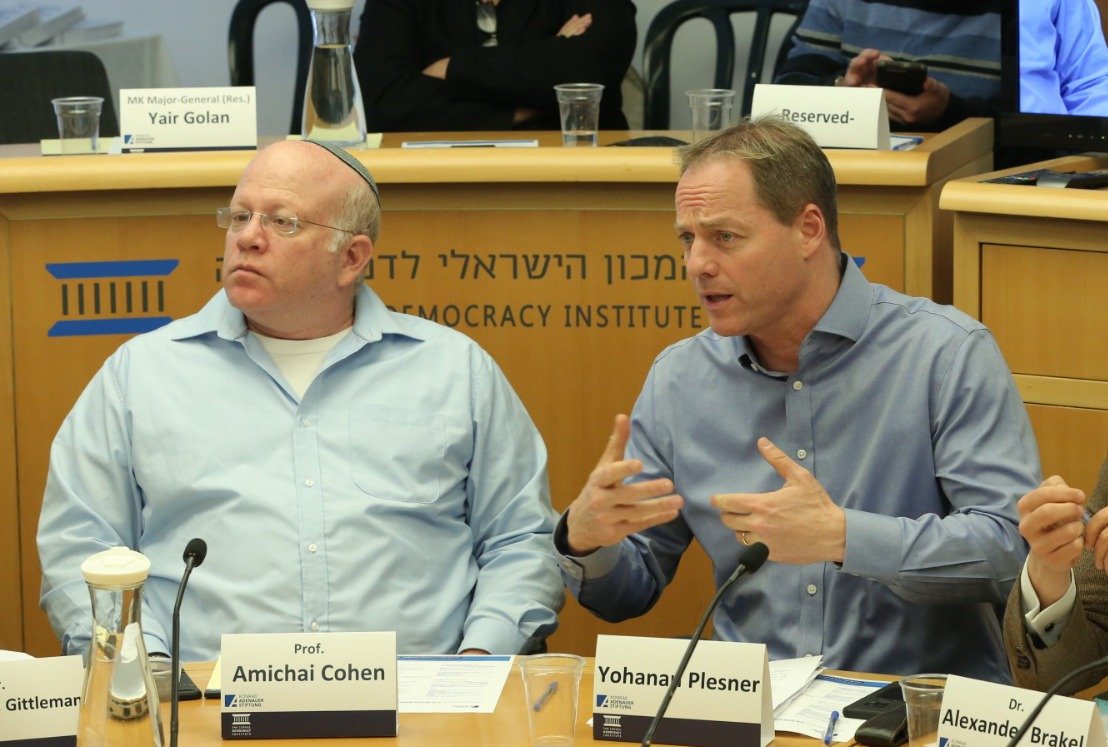 Yohanan Plesner, President of IDI opened the conference saying: "The IDF enjoys the broadest public support, and is also the first place Israelis from different sectors really meet. Our challenge is to preserve the value of mamlahtiut (stateliness) in the 'people's army', especially in a polarized country like Israel."

Dr. Idit Shafran Gitlman, researcher, IDI: "Soldiers today are constantly exposed to external influences, which help shape their value systems. This reality creates gaps between soldiers' values & the IDF code of ethics that it seeks to disseminate. Civil organizations are seeking to fill this gap."

Dr. Shafran presented a study on attitudes among IDF soldiers towards the military's code of ethics and showed that Israeli soldiers are divided on whether or not they think that adhering to the “purity of arms” doctrine, has harmed the army's ability to fulfill its mission by limiting the timing and degree of use of force available to them. 44% stated that they believed that such a policy did hamper their ability to act while 47% did not feel this way. The majority (81%) said that the code of conduct should be secondary among their priorities as soldiers after protecting themselves and their fellow comrades in arms.

MK Major-General (Res.) Yair Golan, Democratic Union: “When discussing the relationship between the military and society, we must remember that the IDF’s goal is to fight and win. In the past the IDF could isolate its soldiers and instill its own world of values. Today the reality is quite different." Golan added: "The military has a huge responsibility to explain to the country what the next war will look like. If they do not prepare the nation correctly – they will not back up the military when necessary. The next war with Hezbollah is going to be unsympathetic and the IDF will not be able to deal with this challenge without the public’s support and full cooperation."

Prof. Yedidia Stern, Senior Researcher, IDI: “Internal solidarity is the foundation of Israeli society's strength and safeguarding it will be the big challenge of the next generation." Stern added:“There are basic disagreements between the different tribes in Israeli society – we must adopt tools to contain these disputes as it will not be possible for one to override the other."

Dr. Amir Bohbot, Walla News: "We see how in the IDF in particular, social networks set the agenda and influence the relationship between soldiers and commanders. In the past commanders had full authority but today that is no longer the case - parents, media & the public are all involved."

Prof. Yuval Shany, Vice President, IDI: "Not surprisingly, the Hebron (Elor Azaria) incident was more serious than others. Notwithstanding moral questions, the soldier’s actions were in stark contrast to basic of military discipline. The truth is that even today, the political system does not accept basic values or rule of law, order and discipline. For them, there are overriding considerations that prevail. The soldiers themselves also come from a world where the consensus on these values has fragmented. The military must maintain a separate set of values from the political system, which is in dissonance with them.”