This law, unique to Israel, was meant as an incentive to avoid budgetary deadlock. Today, it sows instability.

We are used to it. These days, the election cloud is once again hanging over our heads and at the center of the political agenda, for the fourth time in a year and a half. If the Budget Law is not passed in the Knesset by the end of August, provided there are no further postponements, the Knesset will automatically be dispersed.

Now is the time to discuss the link between getting the budget approved and the dissolution of the Knesset.

According to the Basic Law; the Knesset, if the budget is not approved by the Knesset by the end of March, or up to 100 days after the formation of a new government (whichever comes later), the Knesset is automatically dissolved, and three months later, elections are held.

It is both desirable and important that there be mechanisms making it possible for the Knesset to disband before the end of its term in certain situations. Such mechanisms and processes provide the government with flexibility and a way out of situations of political stalemate. This is especially necessary in Israel, where it is very difficult to replace a government through a no-confidence vote; as such a vote requires the support of 61 MKs for an alternative government. This difficulty may create a “deadlock,” i.e.: on the one hand the government will not enjoy a stable majority in the Knesset, and on the other, there will be no majority to replace it.

In Israel, there are several mechanisms for dissolving parliament, which are also accepted in many other democracies: dispersal by the prime minister with the consent of the president; dispersal based on a law to dissolve the Knesset; and dispersal resulting from the failure to form a government. However, the dissolution of the Knesset due to the inability to approve a government budget is a mechanism unique to Israel.

But should we really be dissolving the Knesset because there is no approved budget in place? This is highly doubtful. In fact, the drawbacks of doing so would far outweigh the benefits.

First, the fact that the survival of the Knesset, and consequently of the government, depends on the approval of a budget, makes it possible for small factions and even individual Knesset members to “blackmail” the government by threatening to vote against the budget if their financial demands are not approved. In recent years we have witnessed a long line of cases in which MKs, ministers, and faction leaders from the coalition have taken advantage of this strategy.

Second, the main purpose of this mechanism was to “discipline” the Knesset so as to make it easier to gain the approval of the budget. The underlying premise is that Knesset members prefer to continue in their well-paying jobs rather than be dragged into exhausting elections, at the end of which they may not be re-elected. But in practice, after the Knesset disbanded twice recently without a government being formed, it is not certain that this basic logic is valid anymore.

So yes, it is true that the mechanism by which non-approval of the budget automatically leads to new elections was created out of good intentions, but it seems that it no longer fulfills its purpose, and therefore action must be taken to put an end to it. 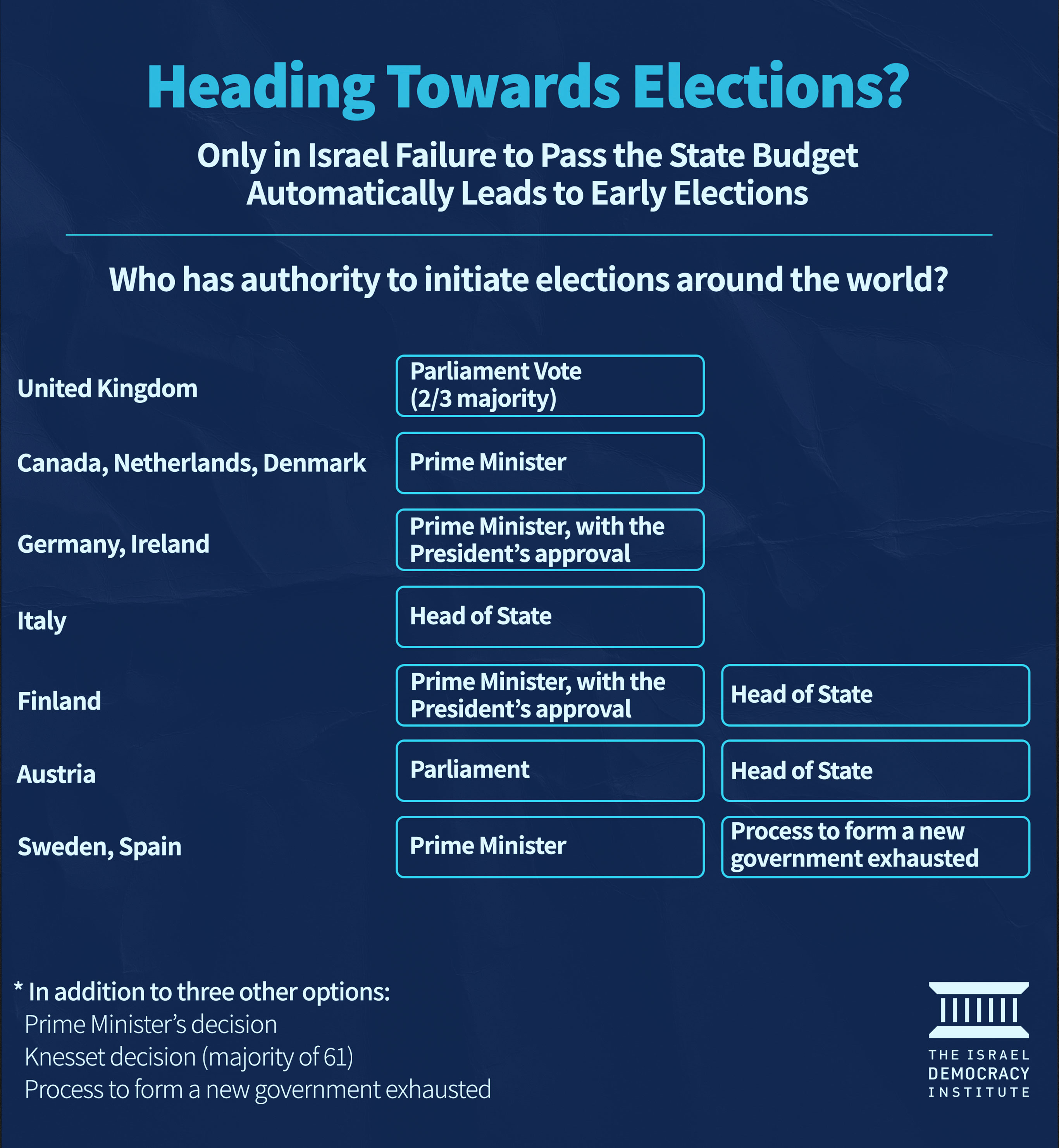