Women still constitute less than 30% of all Knesset members and the percentage of female cabinet members in the government has never risen above 23.5%

Women's representation in the political arena is a subject that comes up often in public debate in Israel—not surprisingly, given that women are sorely under-represented in Israeli politics. For example, In 2019, Israel ranked 31st out of the 33 democratic countries in the OECD on an index of women's representation in government.OECD, Women in Politics, https://data.oecd.org/inequality/women-in-politics.htm. Though the last two decades have seen a rise in the number of women serving in the Knesset, women continue to be under-represented. While the number of women serving in the Knesset reached an all-time high of 35 toward the end of the 23rd Knesset, women still constitute less than 30% of all Knesset members. Women’s under-representation is even more prominent in government, where the percentage of female cabinet members has never risen above 23.5%. Furthermore, it is not enough to merely look at the number of women participating in the political arena, since the positions held by women who serve as elected officials is also something that should be examined. This document provides an overview of women's representation in the Knesset and in government since the founding of the State of Israel, and analyzes the extent to which women have held key positions within these state institutions.

Women's Representation in the Knesset

At the time it was sworn in, the first Knesset included 11 women. The number of women MKs has risen over the years, reaching 30 in the 23rd Knesset—that is, a quarter of all Knesset members (see Figure 1). Despite this gradual increase, women are still sorely under-represented, not only in terms of the number of MKs, but also in terms of their holding key positions in the legislative assembly, such as Speaker or Deputy Speaker of the Knesset, and as chairs of Knesset committees.

The Knesset presidium comprises the Speaker and Deputy Speakers, whose main function is to set the agenda for the Knesset plenum. The Speaker is also responsible for managing the Knesset’s budget and representing the Knesset vis-à-vis foreign representatives, and serves as deputy to the President of Israel. The Speaker is elected by the plenum at the beginning of each Knesset term, while the Knesset Arrangements Committee decides on the number of the deputy speakers appointed and who they should be.Knesset regulations, sections 2 and 6, https://www.knesset.gov.il/rules/eng/ChapterB1.pdf. Since 1948 there have been 18 Knesset Speakers, of whom only one was a woman—Dalia Itzik, who served as Speaker of the 17th Knesset. During her term of office, President Moshe Katzav was recused from office, and Itzik served as acting President, and subsequently served as interim President following Katzav’s resignation until Shimon Peres was sworn in as the new President. For decades, women have also been underrepresented among Knesset Deputy Speakers, with the exception of the sixth Knesset term, during which four of the ten MKs who held the post of Deputy Speaker were women. Since the 18th Knesset, women have constituted some 20%–30% of Deputy Speakers, in line with the overall proportion of female members of Knesset during that period.

The position of Knesset committee chair is also a key function in the legislative assembly. Committee chairs are responsible for setting the agenda of their committees, including discussing and formulating proposed legislation, discussing proposals for Knesset motions, and more. The number of permanent Knesset committees has changed over time, but has remained at 13 since the 17th Knesset, at which time the number of women serving as permanent committee chairs (as of the beginning of each Knesset term) has ranged between one and three. There are three permanent Knesset committees that have never been chaired by women, for even the briefest of periods: The Constitution, Law, and Justice Committee; the Foreign Affairs and Defense Committee; and the Finance Committee. Since 1948, only one woman has chaired the Economic Affairs Committee (Shoshana Arbeli-Almozlino for part of the 12th Knesset term), and only two have chaired the House Committee (Dvora Netzer in the 5th Knesset, and Ruhama Avraham for part of the 17th Knesset term). It is also worth noting that since the 13th Knesset, when it became a permanent committee, the Committee on the Status of Women and Gender Equality has been chaired by 13 women and two men (Gideon Sa’ar in the 17th Knesset, and Oded Forer in the 23rd Knesset).

Figure 1. Women's Representation in the Knesset and in Key Knesset Positions, 1st–20th and 23rd Knesset Terms (%)

In addition, it is noteworthy that the women ministers in the current government hold portfolios that are considered less “prestigious”. Thus, of the eight, only two were cabinet members (Minister of Transportation Miri Regev, and Minister for Strategic affairs Gila Gamliel). 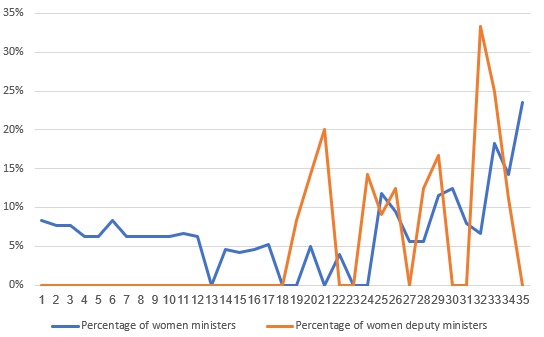 Why is Women's Representation Important?

According to almost every measure, women are under-represented in national politics in Israel. But why is their representation in decision-making forums so important?

In general, we can relate to two types of representation: Descriptive and substantive. Descriptive representation refers to ensuring that the number of representatives reflects the proportion of a specific group, defined in terms of a particular identity component, such as ethnicity, age, or (as is examined in this paper) gender. When it comes to gender, descriptive representation is important for two reasons. First, the presence of women in decision-making forums paves the way for other women to enter these positions, and enhances the legitimacy for their doing so. Second, when descriptive representation is lacking, as is the case for women in Israeli politics, this is testimony to the existence of barriers to women’s participation. These barriers, even if they are not formal, undermine the value of equality enshrined in liberal democracy, since they result in women's more limited access than men to key political positions.

Substantive representation refers to the promotion of minority group interests. Studies have shown that increased presence of a minority group in parliament often leads to the advancement of the interests of that group, since the relevant parliamentary representatives understand the needs of their group and are committed to helping it. Thus, a study on women's representation in the 17th and 18th Knesset, revealed a link between descriptive representation and substantive l gender representation, and Knesset activities aimed at advancing women’s status in society were carried out mainly by women MKs.Assaf Shapira, Ofer Kenig, Reut Itzkovitch Malka, and Chen Friedberg, The Representation of Women in Israeli Politics: A Comparative Perspective, Jerusalem: Israel Democracy Institute (2013). 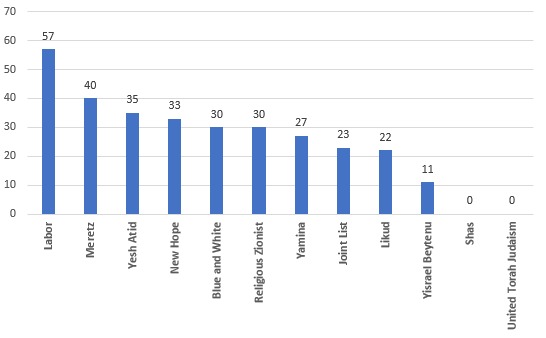