While Israelis award the IDF good grades for its operational capabilities and ethical conduct in combat, less than a third of the public think the IDF is managing its budget well and in a fiscally-responsible manner. 47% of Jewish Israelis now think that the IDF should abandon its 'people's army' model and transition to a professional standing military.

The Center for Security and Democracy and the Viterbi Family Center for Public Opinion and Policy Research at the Israel Democracy Institute conducted a special survey focused on public perceptions of the IDF. The survey reveals that while the public thinks that the IDF is well prepared to deal with security threats, and that its conduct in combat is ethical, public trust is lower when it comes to “managerial” aspects of the military’s behavior.

The survey was carried out with the support of the Konrad Adenauer Stiftung ahead of the annual conference of the Center for Security and Democracy, which will be held on November 23–24, 2021. It was comprised of interviews with a representative sample of 1,003 respondents aged 18 and above.

Large differences in public opinion regarding the IDF's operational capabilities and its civilian aspects: A significant finding of the survey is the gap between the public’s highly positive views of the IDF’s operational capabilities as opposed to public opinion regarding non-combat areas of IDF activity. Some 80% of Jewish respondents awarded the IDF a grade of “good” or “excellent” for its operational capabilities. By contrast, only 43% gave these positive grades for gender equality between men and women in the IDF; less than one-third (31%) for the IDF’s budgetary and financial management; and only one-quarter (25%) for its treatment of conscripts and responsiveness to their problems.

There were noteworthy differences between different sub-groups in the Jewish sample: Only 18% of those who defined themselves as on the Left politically gave the IDF a grade of 'good' or 'excellent' for its budgetary and financial management, compared with 28% in the Center and 34% on the Right.

A breakdown by gender reveals that 37% of Jewish women awarded a score of 'good' or 'excellent' for equality between men and women in the IDF, compared with one-half of Jewish men. There were also differences between religious and secular Jews on this issue: 39% of secular respondents rated the IDF as 'good' or 'excellent' with regards to equality between men and women, compared with almost one-half (48%) of national religious respondents.

Only a minority (18%) of Jewish respondents in the youngest age bracket (18–24) hold that the IDF’s treatment of soldiers and responsiveness to their problems is 'good' or 'excellent.'

Mandatory conscription to the IDF: For the first time since the Israel Democracy Institute began surveying this issue in 2017, more respondents support abolishing the mandatory draft and transforming the IDF into a professional army than oppose this idea. 47% of the Jewish public believe that conscription should be canceled and the IDF professionalized, while 42% disagree. Unsurprisingly, Haredi (ultra-Orthodox) respondents are most strongly in favor of this proposal (80%), while national religious respondents are the least supportive group (32%). In the middle are secular Jews, of whom 47% support abolishing the draft and professionalizing the military.

An interesting phenomenon, which might be indicative of future trends, is the clear difference in ages between opponents and supporters of this idea. While in the 18 – 44 age group (in the Jewish sample) there is a relatively large majority who support professionalization (54%–57%), less than one-third (31%–32%) of those aged 55 and above are in favor.

Oppose or support abolishing the mandatory military draft and making the IDF a professional army (Jews; %)

In response to these findings, Yohanan Plesner, President of the Israel Democracy Institute, said: “The results of this year’s survey show the extent to which the current model of the IDF as a the ‘people’s army’ has become a fragile term in today’s Israel, in which fewer than one-half of all eighteen-year-olds serve in the IDF. The fact that 47% of the Jewish population believes that the mandatory draft should be abolished and the IDF transformed into a professional fighting force is highly problematic, and has the potential of creating a real security crisis. Convincing our best and brightest to serve in a professional army will demand unprecedentedly high salaries and benefits, and even then, this will not necessarily attract the quantity of high-quality personnel the IDF needs. We may find ourselves in a situation in which a small minority of idealists serve in the military alongside those who chose to sign up for lack of any better employment options. In quantitative terms, a professional IDF will still require high conscription percentages, even without considering the gap that will be created in the IDF’s reserve forces, which provide the strategic depth necessary in the event of a conventional war.

The option of a 'professional army' should be removed from the public agenda. Instead, the proposal to lower the age of exemption from military service for ultra-Orthodox Jews, which the current government has already approved, should be implemented immediately. It is important to understand that, without retaining some form of the ‘people’s army’ model, Israel’s security cannot be guaranteed for the long term.”

Pensions for career officers: The Jewish public is divided on the question of whether, in order to retain career officers in the IDF, they should be permitted to retire with a full pension at a younger age than other public servants (45% in favor versus 43% against). However, more than half the Jewish public (56%) agree with the claim that if the standard of salary and pension arrangements for career soldiers is lowered, then high-quality personnel will not remain in the IDF and Israel’s security will suffer, compared with around one-third who disagree.

Law and ethics: A large majority of the Jewish public (77%), but only 35% of the Arab public, rate the IDF highly for its ethical conduct in combat. However, almost three-quarters of Jews (72%) think that by ensuring the law is followed, the IDF Military Advocate General Corps restricts the IDF and makes it more difficult for it to carry out its security tasks. There were particularly large differences on this issue between Jews in different political camps: Among those on the Right, 81% support this claim, while only a third (33%) of those on the Left and 69% of those in the Center agree.

In a similar vein, only 36% of the Jewish public believe that international law should be strictly obeyed, if doing so may impinge on the quality of military operations. Breaking down these responses by political orientation reveals that a majority of those on the Left (70%) hold that international law should be carefully followed, compared with 29% on the Right and 43.5% in the Center. 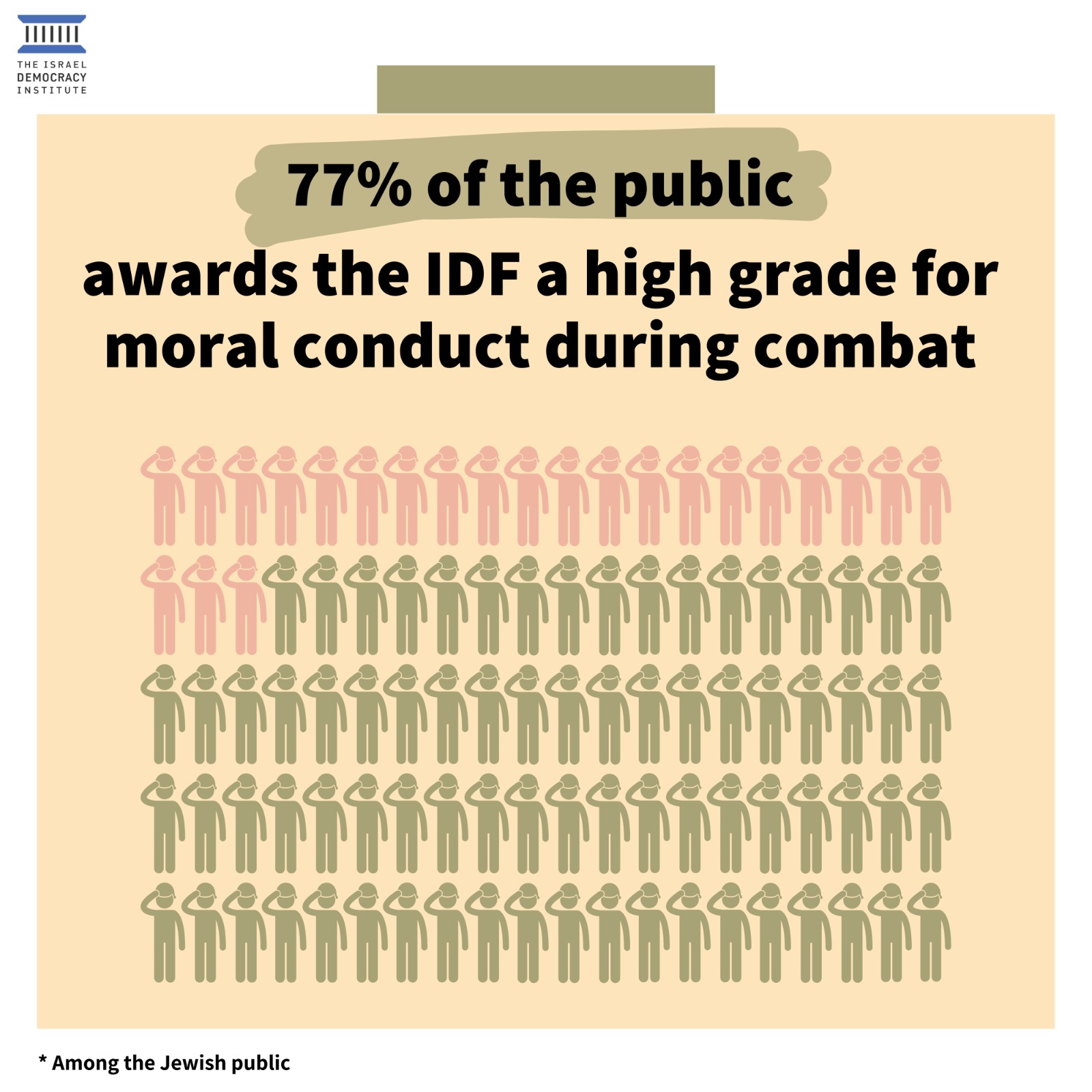 The IDI in Israeli Society Survey is carried out by the Center for Security and Democracy and the Viterbi Family Center for Public Opinion and Policy Research at the Israel Democracy Institute. The survey was conducted between September 30 and October 4, 2021, via internet questionnaires and telephone interviews (to reach groups that are under-represented on the internet). The survey sample comprised 804 respondents (male and female) in Hebrew and 199 in Arabic, constituting a nationally representative sample of the adult population in Israel (aged 18 and above), with a maximum sampling error of ±3.15% to a confidence level of 95%.