A large majority of Israelis justify surveillance in cases of suspicion of security transgressions, criminal or pedophilic activity. Only a minority justifies such measures in cases of anti-government activity.

Do you support or oppose having the state sign a plea deal with Netanyahu according to which he will admit to the charges against him and retire from public life? (%, entire sample)

On this question the gap between the political camps (Jewish sample) is huge: on the left a large majority (81%) favors including the moral-turpitude element in the deal if it is reached; in the center a majority, though smaller (63%), favors it; while on the right only a minority (26%) is in favor.

Think or are sure that a plea deal with Netanyahu should include an element of moral turpitude (%, Jewish sample, by political camp)

What are the chances that the attorney general and Netanyahu will manage to work out the terms of an agreement that both sides can accept?

The Monitoring and Bugging Affair

Amid the media revelations about police use of the NSO company’s spyware, we repeated a question we asked in July 2021 about the policy the Israeli authorities should adopt regarding the sale of such spyware to foreign countries, which use it not a little to monitor human rights activists and political opponents. As in the previous measurement, here too a majority of the interviewees (64%) agreed that the authorities should intervene to prevent such sales. Note that most of the rise in opposition to the sales is among those who defined themselves as right-wing (Jews) – from 49% who agreed on a need to prevent such sales in the previous measurement to 63% this time, similar to the rate of opposition to such sales in the center and on the left.

It was recently reported that the Israeli NSO company sold Pegasus cell-phone spyware that served nondemocratic regimes to monitor and even harm human rights activists and political opponents. In your opinion, should or should not the Israeli authorities prevent a private company from selling such products? (%, entire sample)

Monitoring and bugging of ordinary citizens in Israel – A clear majority (62%) of the interviewees (entire sample) are sure or think that the state agencies, such as the police, conduct monitoring or bugging of ordinary citizens within Israel. An even higher rate (82%) are sure or think so regarding commercial companies such as Facebook and Google. Among the Arab interviewees, a higher rate thinks so than among the Jewish interviewees regarding the state agencies (70% and 61% respectively), while among the Jewish interviewees the rate who think so regarding commercial companies is higher than among the Arab interviewees (85% and 69% respectively).

Think or are sure that state agencies/commercial companies monitor the activities of everyone who uses cell phones or computers (%, entire sample)

When is it permissible to eavesdrop and monitor? We presented the interviewees with a number of possibilities and asked them whether, in their opinion, in such cases it is justified or not justified to engage in monitoring and bugging of ordinary citizens. As the next diagram shows, a large majority justifies monitoring in cases of security transgressions, suspicion of involvement in the criminal world, and suspicion of seeking pedophilic materials online (note that this does not include suspicion of committing pedophilic transgressions). Among the Jews, who in general support the use of monitoring and bugging more than the Arabs, the highest rate justifies such measures against citizens regarding security transgressions, while among the Arabs the highest rate justifies them regarding seeking pedophilic materials and the lowest rate regarding antigovernment activity (though here, quite surprisingly in contrast to most of the cases, the rate who justify it is higher than among the Jews).

In each of the following cases, is it justified or not justified in your opinion to spy on and secretly monitor ordinary citizens (%, justified, Jews and Arabs)

Judges’ approval of monitoring and bugging – About half of all the interviewees responded that they think or are sure the judges are too lenient in giving such approvals. Only about a third think the opposite.

The judges in Israel too easily grant permission to actors in the country to wiretap and monitor ordinary citizens (%, entire sample)

On this issue we found a certain disparity among the three political camps (Jewish sample): on the left and in the center only a large minority thinks the judges are too lenient (40% and 42% respectively), while on the right a small majority thinks so (54%).

Trust in the police – The Israeli public’s trust in the police is at an all-time low: in the entire sample only 29% indicated that they have trust in them, the lowest value since we began the measurements in 2003, with the Arabs’ trust significantly lower than that of the Jews since 2015.
This time in the Arab sample a certain increase was measured in the rate of optimists compared to the two measurements of 2021, but still the general tendency since 2014 is one of decline. Among the Jewish interviewees there has been an ongoing decline in the public’s trust in the police since 2018, with the rate of those professing trust even lower this time than in the last two measurements of 2021, which were already quite low.

A segmentation of the degree of trust in the police by placement on the Haredi-secular spectrum (Jewish sample) reveals that in all of the groups, only a minority has trust in the police. At the same time, the lowest rate of those with trust in the police is in the Haredi public, with this rate further cut in half since June 2021 (from 24% to 11%). The rate of trust of the religious group declined sharply from the previous measurement in October 2021 (from 38% to 21.5%), and among the religious-traditional group as well a certain decline has occurred since then (from 38% to 33%). Among the nonreligious traditional and the secular, a relatively stability has been maintained since the previous measurement.

A segmentation by political camp (Jewish sample) reveals a majority of those who do not trust the police in all three camps, with the highest rate of distrust among those who defined themselves as right-wing (72%), and after that the left (62%) and the center (54%).

The police’s observance of the legal restrictions on bugging – Presumably at least part of the decline in trust in the police stems from the revelation that they have made use of the spyware against ordinary citizens. Hence we wanted to know to what extent the interviewees agree or disagree with the statement: “The Israel Police makes certain that all the wiretapping and digital monitoring of ordinary citizens is in keeping with the law and the regulations.” Out of the entire sample a majority of 56% answered that they do not agree with that statement, that is, the majority thinks the police do not make certain to operate within the framework of the legal restrictions in this regard. Among both the Jews and the Arabs, a similar rate (56%) thinks or is sure that the Israel Police does not make certain that its listening and monitoring activity is in keeping with the legal restrictions.

No trust in the Israel Police, by position on the question of whether the Israel Police makes certain that all the wiretapping and digital monitoring of ordinary citizens is in keeping with the law and the regulations. (%, entire sample)

A segmentation of the responses to this question by political camp (Jewish sample) shows that the disagreement with the statement is particularly prevalent on the right, where a clear majority disagrees that the police operate according to the legal restrictions. On the left and in the center as well, however, a majority holds that view, though smaller.

Sure that the police do not make certain that all the wiretapping and digital monitoring of ordinary citizens is in keeping with the law and the regulations (%, Jewish sample, by political camp)

Trust in the Attorney General

As current attorney general Dr. Avichai Mandelblit completes his term in office, we gauged the public’s degree of trust in this important institution of the law-enforcement system. We found here a low degree of trust: only 31% of the entire sample indicated that they have trust in it (31% of the Jews, 32% of the Arabs), a considerable decline compared to the three previous measurements in which the rate of those having trust came to about 40%. This is the lowest degree of trust in this institution since the beginning of these measurements in 2003, though a similar nadir was measured in 2008.

A segmentation of the Jewish public’s trust in the attorney general by political camp reveals that, while until 2018 the degree of trust of the three political camps, right, center, and left, was similar, in the last two years wide gaps have opened between them regarding the attorney general. In the 2020 measurement, after Dr. Mandelblit’s decision to serve an indictment against former prime minister Netanyahu (November 2019), the trust in him increased substantially in the left-wing camp and decreased on the right. Although such gaps were also found in the current measurement, note that this time a considerable decline in the degree of trust in the attorney general was measured in the centrist and left-wing camps as well. Indeed, the decline in those two camps is even larger than in the right-wing camp.

Fear that they or their family members will get infected by COVID-19 (%, Jews and Arabs) 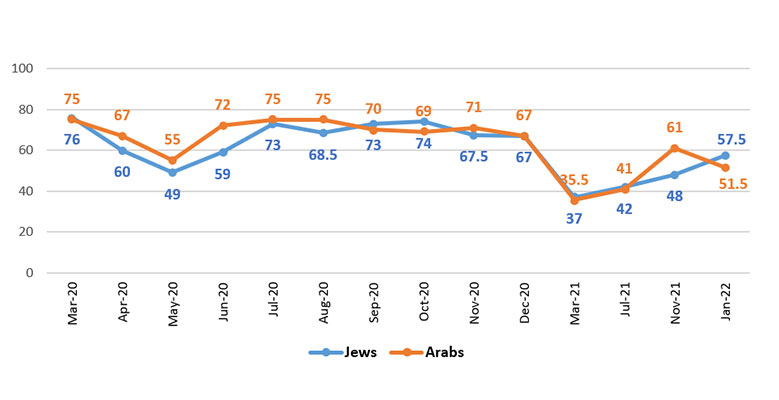 There is also a relationship between the fear of infection and the age variable: with increase in age the degree of fear of COVID-19 infection rises. Whereas half or less of the young people fear infection, a large majority of the older people express that fear.

Fear that they or their family members will get infected by COVID-19 (%, entire sample, by age)

Believe that the Omicron strain signals the end of the coronavirus pandemic (%, Jews and Arabs) 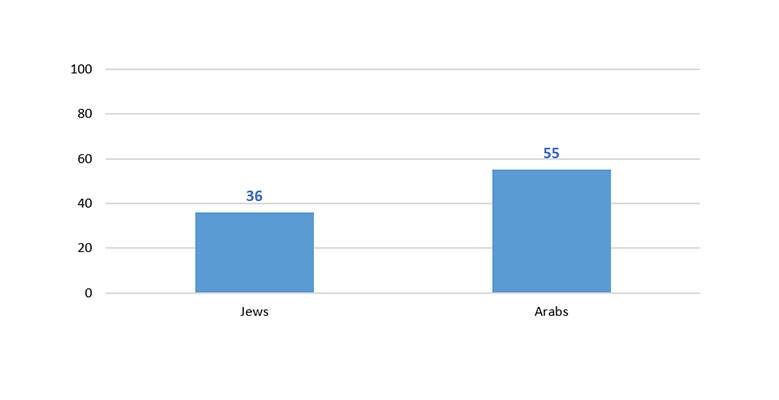 Should the Green Pass restrictions be lifted and the children returned to the schools while canceling the quarantines? – Out of the entire sample more than half of the interviewees agreed with the recommendation to lift the Green Pass restrictions (53.5%). A similar rate (55%) supported the initiative of Education Minister Dr. Shasha-Biton to return the children to the education system with no need for quarantines.

Agree with lifting the Green Pass restrictions and with the initiative to cancel the quarantines in the education system (%, entire sample) 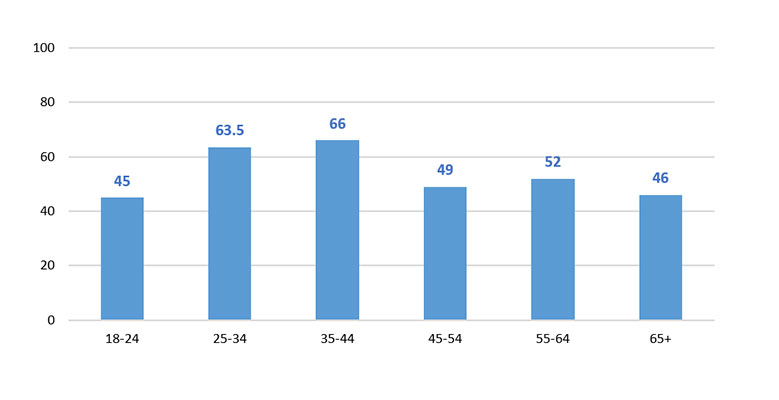 The Israeli Voice Index for January 2022 was prepared by the Viterbi Center for Public Opinion and Policy Research of the Israel Democracy Institute. In the survey, which was conducted on the internet and by telephone (supplements of groups that are not sufficiently represented on the network) from January 25 to 27, 2022, 602 men and women were interviewed in Hebrew and 151 in Arabic, constituting a representative national sample of the entire adult population of Israel aged 18 and older. The maximum sampling error for the entire sample was 3.59%± at a confidence level of 95%. The fieldwork was done by the Midgam Institute. For the full data file see: https://dataisrael.idi.org.il