A special IDI survey finds that while Israelis are divided on whether hametz (leavened foods) should be forbidden on Passover from public institutions such as hospitals, over 96% of Jewish Israelis say they plan on holding a Seder this year. 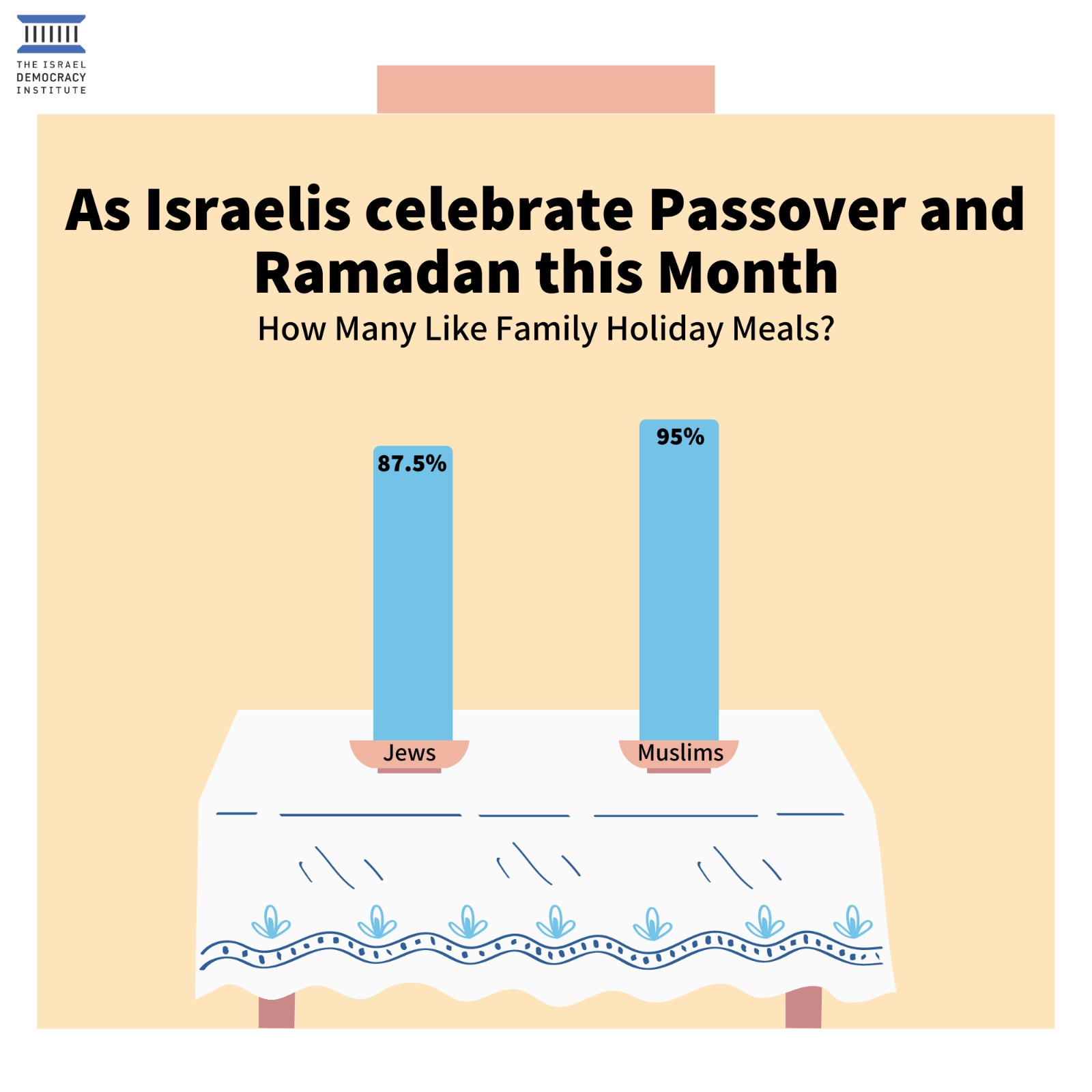 Family Expenses for the Holidays

In your estimation, will your family expenses for the coming Passover (Jews)/ Ramadan (Muslims) be… (Jewish sample and Arab sample; %)

In the Jewish sample, almost no difference was found in projections for expenses between respondents with higher-than-average or lower-than-average income. In both cases, a majority of respondents expect their expenses to rise – 73% of those whose monthly income is below the average, and 71.5% of those whose income is above average. A breakdown by religiosity also found a majority in each group who share this estimation, with this majority largest among Haredim (79%) and smallest among secular respondents (64%).

The Jewish public is divided on the issue of whether, during the interim days of Passover (“hol hamoed”), it should be forbidden or allowed to take hametz (leavened foodstuffs) into hospitals. Around half said it should be banned (49%), while a slightly lower share said it should be permitted (44%).

Regarding IDF bases, there was slightly less support for permitting hametz to be taken in, with 37% of Jews saying it should be allowed and 58% that it should be forbidden.

Should it be forbidden or allowed to take hametz into hospitals and IDF bases? (Jewish sample; %)

In the Jewish sample, as expected, large differences were found between groups along the Haredi-secular spectrum: A very large majority of Haredi, national religious, and traditional religious respondents said that it should be forbidden to take hametz into either hospitals or IDF bases. By contrast, a large majority of secular respondents said that it should be allowed in both cases. The traditional non-religious respondents were more ambivalent, though in this group too there was more support for banning hametz from these institutions than for permitting it.

Should it be forbidden or allowed to take hametz into hospitals and IDF bases? By religiosity (Jewish sample; %)

A breakdown of the Jewish sample by sex found a noticeable difference: While among men, the share of those who support allowing hametz to be taken into hospitals (47%) is the same of those who oppose it (46%), among women we found a considerably larger share who support forbidding this practice than support permitting it (53% versus 41%, respectively). Similar differences – though smaller – were found regarding taking hametz into IDF bases: among women, 59% are in favor of forbidding it, and 35% of allowing it; among men, 53% would ban it, and 40% would permit it.

Where Will People Celebrate the Passover Seder Night?

The largest share of respondents (49%) plan to celebrate the seder night at the home of relatives or friends. A slightly lower share will hold a seder at home (41%), 6% said that they will be abroad or at a vacation site in Israel, and only 2% said that they will not celebrate the seder at all. No differences at all were found between Haredi and secular respondents, between those of different political orientations, or between younger and older age groups. 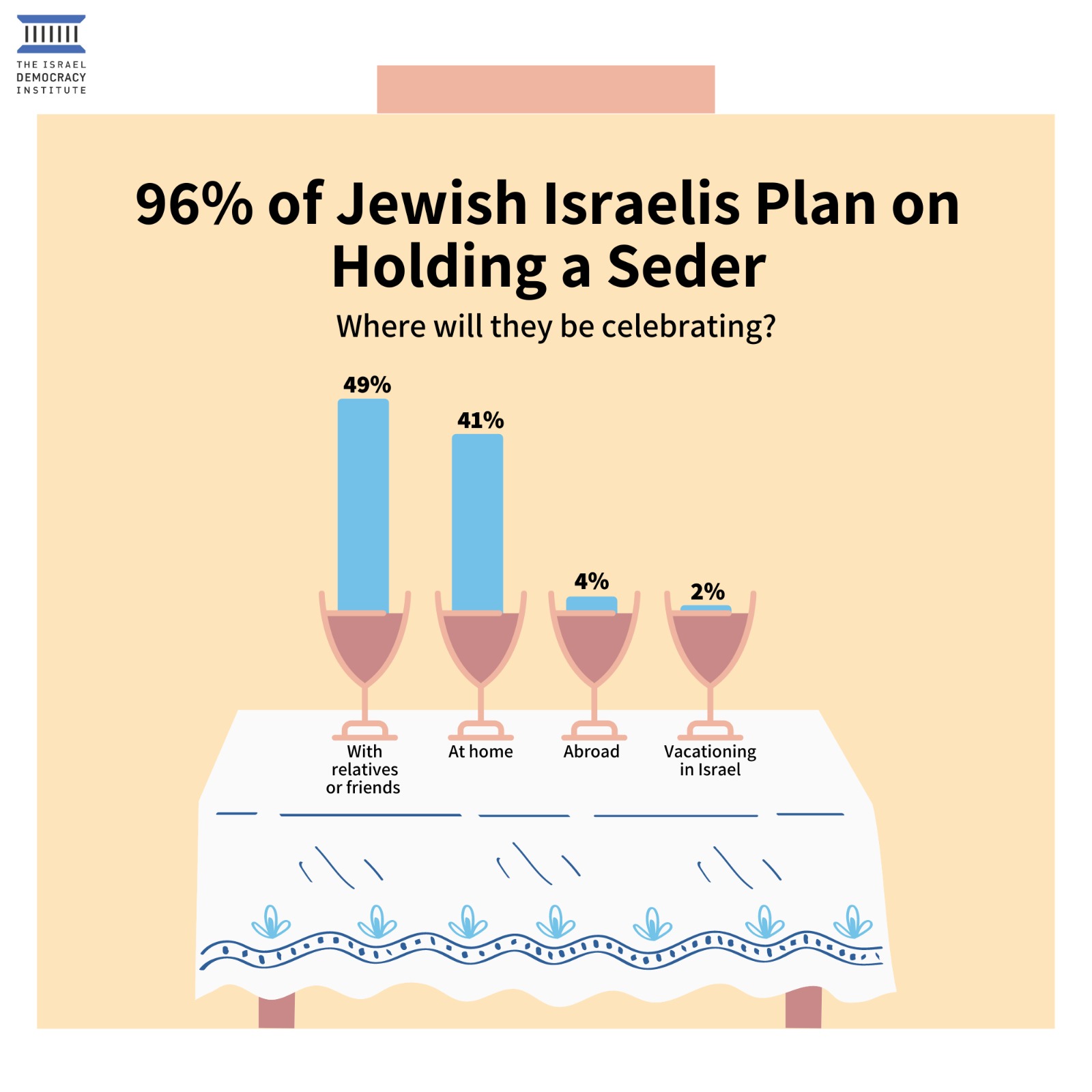 Very much or somewhat like family meals, by political orientation (Jews; %)

The March 2022 Israeli Voice Index was prepared by the Viterbi Family Center for Public Opinion and Policy Research at the Israel Democracy Institute. The survey was conducted via the internet and by telephone (to include groups that are under-represented on the internet) between March 29 and April 1, 2022, with 605 men and women interviewed in Hebrew and 156 in Arabic, constituting a nationally representative sample of the adult population in Israel aged 18 and over. The maximum sampling error was ±3.59% at a confidence level of 95%. Field work was carried out by Midgam Research and Consulting Ltd. The full data file can be found at: https://dataisrael.idi.org.il.