50% of Jewish Israelis support allowing Jews to pray on the Temple mount – 38% because it is proof of Israel’s sovereignty over the site and 12% because it is a religious commandment.

* Assessments of Prime Minister Bennett’s policy in response to the recent security events were on the negative side across the sample, but particularly among Arab respondents and among voters for opposition parties.

* Most Jewish respondents gave good or moderate scores to the police’s handling of events in Jerusalem and the Temple Mount, while a majority of Arab respondents graded it poor.

* A large majority of Jewish respondents gave poor grades to the conduct of the Arab parties Ra’am and the Joint List in the context of the recent security events. Among Arab respondents, Ra’am received a slightly more negative rating than the Joint List.

* There was a sizable fall in the share of respondents who expect the current government to hold together until the end of the year—only one-third think it will, compared with around one-half two months ago.

* Should the government lose its majority in the Knesset, slightly over one-third of respondents would be in favor of new elections, a very similar share would prefer a new coalition supported by 61 Knesset members without elections being held, and slightly fewer would like there to be a minority government supported by elements in the opposition on an ad hoc basis.

* Though still a majority, the proportion of Jewish Israelis who view the Holocaust as a unique historical event has declined, while there has been a rise in the share of those who think that it was a tragic event of genocide that has historical parallels.

* Ahead of Independence Day: There has been a fall in the share of those who think that overall, Israel’s successes outweigh its failures. Among Jewish respondents, there is still a majority who take this view, while the opposite holds true for Arab respondents.

While there has been a rise relative to last month in optimism regarding the future of Israel’s national security, as the figure below shows it has not yet returned to its level six months ago (38% currently, compared with around 50% then), and once again this month, only a minority have a hopeful outlook on the country’s security future. The size of this minority is very close to the share of those who are optimistic about the future of democratic rule in Israel (40%), which is usually the lower of the two.

Though it cannot be said to be rocketing, this increase in optimism about the future of Israel’s national security should not be taken for granted, as the last month was rife with negative security events. This may be a sign of the satisfaction of certain segments of the public with the way in which decision-makers in politics and in the security forces have responded to these challenges (see below).

In light of recent events, we decided to examine the public’s view of Prime Minister Bennett’s policy, the police’s handling of the security events in Jerusalem, and the conduct of the Arab parties Ra’am and the Joint List.

Prime Minister Bennett’s policy: In the Jewish sample, 33% gave this policy a good rating (compared with 42% who graded it poor and 21% who awarded it a moderate score). In the Arab sample, a particularly low share of respondents (16%) viewed this policy positively.

The largest differences in ratings for the prime minister’s policy were found by voting pattern at the last elections: Among those who voted for parties in the coalition, almost half (48%) gave this policy a good grade, compared with just 13% of those who voted for opposition parties. The ambivalence toward the prime minister’s security policy was clearly evident among voters for his own party, Yamina, of whom 35% awarded a positive rating, one-third a negative rating, and 29% a moderate rating.

Scores for Prime Minister Naftali Bennett’s policy for dealing with the security events of the last month, by voting pattern (total sample; %)

The police’s handling of the confrontations in Jerusalem and on the Temple Mount: Here, we found large differences between Jews and Arabs. Over half the Jewish respondents awarded good grades to the police’s handling of these events and a further 20% gave it a moderate score, while less than one-quarter rated it poor. By contrast, 70% of Arab respondents graded the police’s conduct as poor. A breakdown of the Arab sample by religion shows that while 78% of Muslims gave the police a poor rating, only 38% of Christian and Druze respondents did likewise.

Scores for the police for their handling of security events in the last month (Jewish sample and Arab sample; %)

The conduct of Ra’am and the Joint List in the context of the security events of the last month: The majority of Jewish respondents had a negative assessment of the conduct of these two parties (Ra’am, 62%; Joint List, 76%). Among Jews, the negative view of Ra’am was not restricted to voters for opposition parties at the last elections (73%), but was also shared by voters for parties in the coalition, of which Ra’am is of course a member (53%).

Scores for the conduct of Ra’am and the Joint List in the context of the security events of the last month, by voting pattern (total sample; %)

Prayer on the Temple Mount

Seeing as the issue of Jewish prayer on the Temple Mount has been the focus of public discourse lately, we asked the Jewish respondents whether they support or oppose allowing this practice, and why. More are in favor (50%) than are against it (40%).

The main reason given by those in favor of allowing this practice was that it demonstrates Jewish sovereignty over the site, while the main reason of those against was that it might invoke a severe negative reaction from the Muslim world.

What is the main reason why you support or oppose allowing Jews to pray on the Temple Mount? (Jewish sample; %)

A breakdown of responses by religiosity found that most Haredim oppose Jewish prayer on the Temple Mount because it is prohibited by halakha (86.5%). The largest shares among national religious, traditional religious, and traditional non-religious respondents support such prayer because it is proof of Israel’s sovereignty over the Temple Mount (51%, 54.5%, and 49%, respectively), while the largest share of secular respondents oppose it because it might invoke a severe negative reaction from the Muslim world (39%).

What is the main reason why you support or oppose allowing Jews to pray on the Temple Mount? By religiosity (Jewish sample; %)

Will the government survive to the end of the year? This month, less than a third of respondents (30%) estimated that there is a high likelihood of the government surviving at least a year, while twice as many (60%) considered the chances of this to be very small. This represents a sharp decline relative to February 2022, when half the respondents thought there was a good chance that the current government will survive.

What is the likelihood that the government will continue to be in place at least until the end of the year? (total sample, February and April 2022; %)

It is not only voters for opposition parties who believe that the government will not survive long (76% of them expressed this view); around one-half of voters for coalition parties (48%) shared the same opinion. Just 44% of those who voted for parties in the coalition think there is a high likelihood that the government will survive at least until the end of the year.

Estimate a very low likelihood or no chance at all that the government will survive at least until the end of the year, by voting pattern at the last election (total sample; %)

Preferred political option: Slightly more than one-third (35%) would like new elections to be held, a similar share (33%) would be in favor of a new coalition (without elections being held) supported by at least 61 Knesset members, and a slightly lower proportion (29%) expressed a preference for continuing with the current government as a minority government, with external support on certain issues from Knesset members in the opposition.

If the government loses its Knesset majority, which of the following possibilities do you think would be preferable? (total sample; %)

A breakdown of responses reveals that while most of those who voted for center and left-wing parties want the current government to continue as a minority government, the majority of voters for Religious Zionism and Yamina would prefer a new coalition without elections. This is also the most common view among United Torah Judaism voters. The majority of voters for Likud and the Joint List, and a large share (though not a majority) of voters for Shas and Ra’am, would prefer new elections to be held.

If the government loses its Knesset majority, which of the following possibilities do you think would be preferable? By voting at the last elections (total sample; %)

Ahead of Israel’s 74th Independence Day

On this question, we found sizable differences between Jews and Arabs: While more than half of the Jews (53%) said that the State of Israel has had more successes than failures, this view was held by only 17% of Arab respondents. 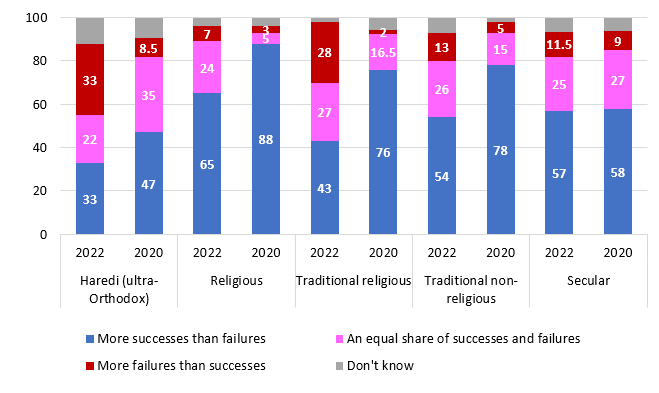 We found a close relation between the view of Israel’s successes and failures and voting pattern at the Knesset elections. Relative to 2020, the largest fall in the share of those who hold that the successes outnumber the failures has been among Likud voters. A significant decline was also evident among voters for Haredi parties. Among voters for parties in the coalition, the picture is more complex: This share dropped sharply among Meretz voters, while the fall was more moderate among voters for Labor and Yisrael Beytenu. Among Yesh Atid voters, the share of those who see more successes than failures has remained at a similar level, and among Blue and White voters it has even risen relative to two years ago.

Hold that Israel has had more successes than failures, by voting pattern (Jewish sample; %)

*The following parties stood together at the 2020 elections: Labor and Meretz; Blue and White and Yesh Atid; Yamina and Religious Zionism.

The Israeli Voice Index for April 2022 was prepared by the Viterbi Center for Public Opinion and Policy Research of the Israel Democracy Institute. In the survey, which was conducted on the internet and by telephone (supplements of groups that are not sufficiently represented on the network) from 24 to 26 April 2022, 601 men and women were interviewed in Hebrew and 150 in Arabic, constituting a representative national sample of the entire adult population of Israel aged 18 and older. The maximum sampling error for the entire sample was ±3.65% at a confidence level of 95%. The fieldwork was done by the Midgam Institute. For the full data file see: Data Israel