Why it is a bad idea to allow the coalition the deciding voice in the appointment of Supreme Court justices? Is it true that in Israel, judges appoint themselves? The complete guide to the impending constitutional reform.

In Israel, the procedure for appointing judges is in the hands of on the Judicial Selection Committee (JSC), which selects and promotes judges and can also remove them from the bench. In Israel, the courts deal mainly with legal issues that have no constitutional ramifications. Only a small number of cases before the Supreme Court raise constitutional questions. Accordingly, the composition of the JSC is an attempt to balance the “professional” with the “political”, and is made up of representatives of all branches of government—two ministers, two Knesset members, three Supreme Court justices—as well as two representatives of the Israel Bar Association.

1. Is there any truth to the claim that in Israel the “judges appoint themselves”? Does the coalition have any ability to influence the selection of judges?

As noted, the Judicial Selection Committee is composed of politicians, judges, and Bar Association members. Since 2008, the selection of Supreme Court justices has mandated the consent of the politicians on the JSC, because a majority of seven of its nine members must support a successful candidate. By the same token, the politicians cannot select judges without the agreement of the justices on the committee. This principle has generally produced a consensus on a slate of new justices.

The fact that Knesset members and ministers can influence the choice of justices (especially in order to reflect different sectors of the population), while maintaining the judges’ independence, guarantees the continued independence of the judiciary and the appropriate balance between the three branches of government.

So what we are seeing is that the current system allows the coalition to influence the composition of the courts, and especially the Supreme Court.

2. Why is the balance between politicians and professionals on the JSC especially important under the Israeli constitutional system?

The balance between the politicians and the professionals, which safeguards judges’ independence, is especially important for a number of reasons:

• In Israel, unlike most democracies, the judiciary serves as almost the only brake on the Government’s power. Israel does not have a bicameral legislature or a president who is elected independently and wields executive authority; there is no division of power in the form of a federal system or other mechanisms that provide checks and balances.

• In Israel, again unlike most democracies, the arrangements to guarantee the independence of judges, such as tenure, retirement age, and mode of appointment and removal, are not anchored in a constitution, but rather are stipulated in a Basic Law, which can be amended by a simple majority in the Knesset.

3. Is it true that in other countries the politicians choose the judges?

First of all, the method by which judges are chosen for the lower courts in Israel is not exceptional and can be viewed as part of a worldwide trend to adopt a model similar to that followed here, based on a committee made up of representatives of different sectors, with great weight or a majority given to sitting judges.

Nor is the method by which Israeli Supreme Court justices are chosen an outlier in a comparative perspective. In many democracies there are limits on the ruling coalition, intended to moderate the politicization of the selection of justices. Several mechanisms can be identified:

• A nominating committee that includes legal professionals, or appointments made only after consultations with professionals: Great Britain, India, Greece, Israel, Canada, Australia, and elsewhere

• Selection by each of the three branches of government or a requirement that several independent branches cooperate: The United States, France, Belgium, Austria, Mexico, Italy, Spain, and elsewhere

A cautionary note: There are countries where politicians have the sole voice in the appointment of judges to the High Court; or only the coalition or the executive branch does so. But these countries have constitutional mechanisms that do not exist in Israel, including a constitution that is protected against amendment by a simple coalitionary majority, constitutional protection of judicial independence, a full bill of rights, and checks on the executive’s power, in addition to the Supreme Court.

As already mentioned, only a small fraction of the Supreme Court’s docket involves judicial review of legislation (overall only 321 procedures in the period between 1995 and 2017, as opposed to thousands of cases decided by it annually in other matters). Most of its work deals with civil, criminal, and administrative issues.

Because most of the cases are appeals of the decisions of district courts, it is in the public’s interest that the justices who hear them are the best qualified jurists who make their rulings on the basis of professional legal standards.

The work of Israeli Supreme Court justices is different than that of their counterparts in other countries.

Another reason for the balance among the members of the JSC is to guarantee judges’ independence. This is also essential for the Supreme Court, precisely because of its constitutional function and balancing of power.

5. Why shouldn’t the coalition have the decisive voice in the selection of Supreme Court justices, considering that only if justices serve long terms can that have a real impact on the composition of the bench (as happens, for example in the United States)?

The average tenure of Israeli Supreme Court justices is significantly shorter than that of their counterparts in the United States. This means that in a relatively short period a coalition, if granted exclusive power to select the justices, could totally remake the bench.

What is more, do we want the Supreme Court to reflect the coalition’s majority and rule according to its worldview? That system contradicts the very idea of a balance of power between the branches of government. The coalition’s role is to reflect the majority’s decision at the ballot box—to rule and pass laws. The court is meant to serve as the authoritative interpreter of the law, regardless of the current parliamentary majority, and to prevent the majority from turning tyrant and undermining the right of minorities or individuals. 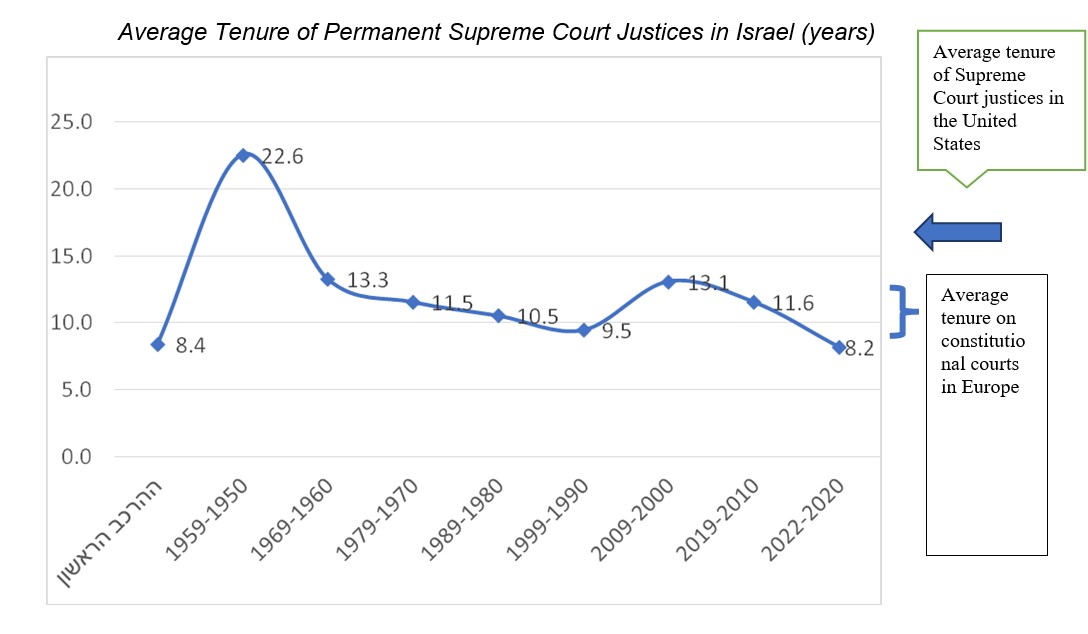 Notes: For sitting justices, their anticipated tenure until reaching the statutory retirement age has been included in the calculation. The average for each period is based on the duration of the tenure of permanent justices appointed in those years.

6. Is the Supreme Court Bench “Homogeneous, Leftwing, and Elitist”?

It is important that the procedure for appointing justices reflect the composition of society; that is, while the nominees must be the most suitable from a professional perspective, the bench also needs to reflect society and its makeup. The fact is that today the Supreme Court in particular, and the judiciary in general, fails to do so adequately:

• There are too few women justices.

• There are too few Arab judges in the system (only 8% of the total).

• There is only one Arab justice on the Supreme Court.

• There are too few Mizrahi justices.

• The proportion of observant Jews on the bench is in fact greater than their share of the general population.

So there is certainly room for reforms in the policy followed by the JSC that would lead to greater diversity, such as by conducting proactive searches for suitable minority candidates.

Nevertheless, in recent decades there has been an improvement in the social diversity of Israeli judges and of the Supreme Court: An increase in the number of Arab judges, an increase in the proportion of women judges, and an increase in the number of judges from peripheral areas. On the Supreme Court as well, justices' social background is more diverse than in the past, with justices from the social periphery; it is not true that they all come from elitist backgrounds. The change in the composition of the judiciary in recent years, with greater diversity in the judges’ social background, indicates that the method for appointing them is working.

As for the assertion about judges’ political views: We don’t know what they are, and that is how it should be.

7. Still, are there grounds for changing the composition of the JSC and the way it works?

• The manner in which the institutions of the legal profession select its representatives on the JSC should be modified.

• The JSC should be more meticulous in its regulations to avoid conflicts of interest by its members.

• The procedure should be made more transparent.

• The JSC should actively take the initiative to ensure that specific minorities are  included in the list of candidates for judicial positions, not only in terms of quantitatively increasing their number, but also to qualitatively ensure that they are candidates for higher courts—including the Supreme Court, in such a way as to better reflect the composition of Israeli society.