IDI Vice President Prof. Mordechai Kremnitzer and Noam Lautman, Chairman of the Lautman Fund, recommend ways in which the Israeli educational system can strengthen democratic values, and warn that students should not be forced to choose between two competing alternatives—Israel as a nation-state or as a "state of all its citizens." 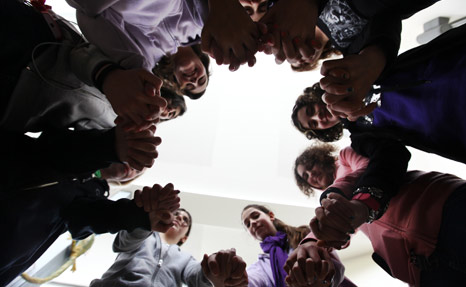 On June 1–2, 2015, the Israel Democracy Institute, the Lautman Fund, and the Open University convened the inaugural Dov Lautman Conference on Educational Policy. We chose "Education for Democracy" as the theme of the conference because we believe that the educational system must take responsibility for setting a comprehensive policy in this area.

Israeli democracy is showing signs of weakness. Democratic values reached a nadir in Israeli society during the Gaza conflict in the summer of 2014, with public discourse sinking to a new low of hostility and hatred. More recently, members of the Ethiopian community protested against racism and discrimination that have been directed at them for many years. IDI's most recent Israeli Democracy Index shows that approximately 64% of Jews in Israel believe that crucial decisions about Israel’s system of government and economic structure should be made by a Jewish majority. In addition, the period leading up to the recent Knesset elections was replete with cheap political discourse characterized by condescension, animosity, derogatory labeling, and degrading generalizations—further evidence of the extent to which Israeli society is fragmented and conflicted.

While there are many causes for the above, Israel’s educational system shares some of the responsibility for the bleak state of affairs, since it has not risen fully to the challenge of educating for democracy.

Throughout all years of Israeli education, schools emphasize Israel’s Jewish character in curricular materials, the school’s atmosphere, ceremonies, and in commemorations of religious and national holidays. Depending on who is teaching the class and which subject matter is studied, Israel’s Jewish character sometimes takes on a particularistic cast that is radical, nationalistic, condescending, and hostile toward the "Other." Education must emphasize what is general and shared, alongside conveying the particular. As long as the education system forces students to choose between two competing alternatives—Israel as a nation-state or as a "state of all its citizens"—education for democracy has no chance in Israel. We must realize that there is no contradiction between Israel’s role as a nation-state and its role as a state of all its citizens. If Israel is not a state of all its citizens, it is not a democracy.

In recent years, the values of substantive democracy and the discourse of human rights in Israel have become identified with political views that are considered "left-wing" in Israel. Consequently, any discussion of these values is seen as being political and partisan. As a result, teachers are reluctant to discuss issues that could cause controversy and provoke negative responses from students and parents. When this tendency is applied to the study of civics and democracy, it results in content that is sparse, boring, and poor in substance.

The idea that human rights are the purview of the Left is substantively distorted and runs contrary to the history of the Zionist movement, as the main advocates of human rights in Zionist history were, in fact, the leaders of the Right. This approach also poses an unparalleled danger, since democracy—in its substantive sense—is not seen as the subject of broad consensus; rather, it has become a controversial issue embroiled in the world of political strife.

The educational system must act to strengthen civics and democracy education on several levels:

Finally, it is important to create a policy that will establish meaningful encounters that will enable members of different groups in Israeli society to meet and work together, and will reduce ignorance, prejudice, fear, and hostility. To accomplish this, we must know the culture and the language of the "Other" and include teachers from minority populations as instructors in all sectors of society.

These are the tasks that await Israel's newly appointed Education Minister, Naftali Bennett, who is responsible for all the schools in Israel and for training the future citizens of the state. It is his duty to ensure that Israeli education not only shapes the students' identities as Jews and Israelis, but also impacts their perceptions of democracy. If liberty and human dignity are dear to us, we must place education for democracy at the forefront of our educational priorities.

A Hebrew version of this article was published on the Walla! news portal on June 9, 2015.

Noam Lautman is the Chairman of the Lautman Fund, which is dedicated to promoting formal and informal education and collaboration and equality between different populations in Israel.