Prof. Yedidia Stern analyzes the problems with past proposals to integrate the ultra-Orthodox sector into the IDF, and proposes a new solution. 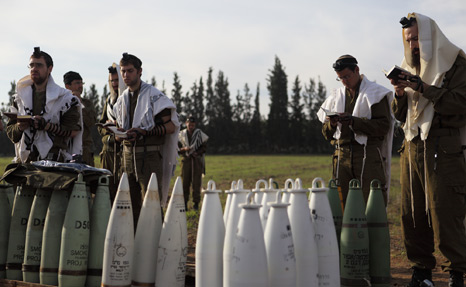 Israel's coalition negotiations are being conducted far from the public eye. On the face of it, everything is still wide open—the makeup of the coalition, the distribution of portfolios, the basic principles of the government—except for one thing that has already been determined and is set in stone: the cancellation of the criminal sanctions for ultra-Orthodox soldiers who do not enlist in the Israel Defense Forces. These sanctions, which were prescribed by law by the last Knesset, are meant to go into effect if the Haredi community does not meet the annual enlistment quotas that have been set for it.

Despite the fact that this is an important and volatile issue and the writing is on the wall, everyone is walking on eggshells. Israel's political parties, the media, and the public are avoiding the matter completely. The very same issue that brought down the government two years ago, led to the dissolution of the 18th Knesset, and was one of the greatest areas of contention in the 19th Knesset seems to have become irrelevant. Is this really the case?

In truth, we should be happy about the prospects of cancelling the criminal sanctions. None of the experts on the ultra-Orthodox community in Israel supported this provision in the legislation passed by the last Knesset. Many of the Knesset members who voted in favor of the law in the end did so against their conscience, as if possessed. It was clear at the outset that these sanctions, which are insulting and lack any practical purpose, will cause damage to the overarching goal of the legislation, which is to integrate the ultra-Orthodox into the Israeli military and into the labor market thereafter. And the facts in the field substantiate this. This pretentious, irresponsible move by several members of the previous Knesset, who sought to trounce the ultra-Orthodox community without understanding the society and community under discussion, is destined to explode when it confronts reality in the future.

Anyone who wants to promote equal sharing of the burden of military service in Israel and to ease relations between the ultra-Orthodox community and Israeli society, however, cannot simply cancel the sanctions and leave the matter wide open, without an alternative arrangement. This is because doing away with the criminal sanctions makes the Haredi draft law a dead letter; It renders it merely a statement, since if the Haredi community decides to disobey the legislation, it will have no practical effect. Consequently, it is clear that if the coalition agreement cancels the criminal sanctions without stipulating an alternative, as soon as the amendment to the law is passed, the Supreme Court will be asked to invalidate it. The same court that struck down the Tal Law, which essentially exempted the ultra-Orthodox from service, will again have to stir the boiling social cauldron and invalidate the pared down law because it violates equality. As in a game of snakes and ladders, we will go back to square one.

The most probable scenario that will emerge from the current situation is that we will soon face the very same problem that led to the elections for the 19th Knesset, without having achieved anything. The rabble-rousers in both camps will again foam at the mouth, the wall of animosity between the different sectors of Israeli society will again be raised, and strife and division in Israel will again abound.

The solution to this problem is ready and available, here and now. It is in the interest of both the Haredi community and the general Israeli public for the coalition negotiations to include an agreement that will stipulate that in return for cancelling the criminal sanctions, a mechanism of economic incentives will be established that will promote ultra-Orthodox enlistment in accordance with the ambitious goals set by the Netanyahu government in 2011.  The solution that Dr. Haim Zicherman and I proposed to the previous Knesset will incentivize the Haredi world to encourage men who are not suited for fulltime Torah study or who do not wish to devote their lives to such study to enlist. In this manner, the invisible hand of the market of Torah study will bring about the realization of the ultra-Orthodox enlistment goals. According to our proposal, not a single Haredi will be imprisoned because of his desire to learn Torah; as a result, the flags of the symbolic war will be lowered, and the realistic objectives of the legislation will be able to be achieved.

It is understandable that Israel's political parties are remaining silent on this issue at the moment, since they all want to leave open the possibility of joining the government. As soon as the coalition is made, however, all the parties that have remained outside the government will raise a hue and cry. The current quiet will be replaced with righteous indignation. The ruling party would do well to disarm this social time bomb before it detonates. Contrary to conventional wisdom, there is reason to believe that the Haredi leadership will be able to recognize the potential long-term benefits of the proposed arrangement, which respects those who study Torah, in line with the values of the ultra-Orthodox community, while at the same time removing the stigma of draft evasion from Israel's ultra-Orthodox community. For the Haredi community in Israel, this should make it a winning combination.

Prof. Yedidia Stern is a Vice President of Research at the Israel Democracy Institute and a Professor of Law at Bar-Ilan University.
Notes