In the article below, three IDI experts on terrorism and democracy discuss the key points of the UN Security Council resolution that condemns the abuse of human rights by the Islamic State, and note two points that they believe are missing from the resolution. 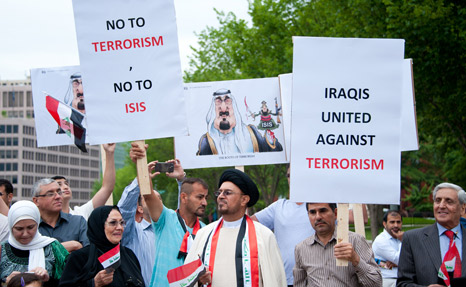 In our previous article on the Islamic State (ISIS), we addressed the legal status of the Muslim caliphate that this terror organization has established in the territories under its control and concluded that it is still early to determine whether the caliphate meets the conditions for a State under international law. Regarding the military action taken by the international community in response to the actions of the Islamic State, we explained that from an institutional perspective, any international action should be backed by an invitation either from the State where the action is being conducted or by a resolution of the UN Security Council, which is entrusted with maintaining world peace and security.

In the short time since the publication of our article, there have been additional military developments, as many States decided to launch air strikes against the activists and facilities of the Islamic State and these attacks succeeded in stopping the advance of the Islamic State on some fronts. In response to the attacks, the Islamic State released a fourth video clip showing the execution of Alan Henning, a British aid worker.
Recently, there has been a development in another arena:  the legal one. This development resulted from a resolution by the UN Security Council on the fight against terrorism in general and against the Islamic State in particular. In this article, we will discuss the key points of that resolution and will note two important aspects we believe are missing in the resolution.

Resolution 2170 (2014) of the UN Security Council, which condemns "gross, systematic, and widespread abuse" of human rights by the Islamic State, was adopted under Chapter VII of the UN Charter, which gives  the Security Council broad operative authority including the authority to use force when there is a threat to international peace and security. Despite the fact that the use of force against the Islamic State is intensifying, the Security Council resolution does not address the issue at all; rather, it focuses on restricting the activists of the organization and limiting the ability of new activists to join its ranks.

The resolution addresses the fight against international terrorism in general, and therefore cites other Security Council resolutions on combating terrorism that were adopted in the past and that defined mechanisms for fighting terrorism, such as the imposition of economic sanctions. The resolution also reiterates that terrorism is one of the most serious threats to international peace and security. It addresses the negative impact of the terrorist organizations operating in Iraq and Syria in general and of the Islamic State organization in particular, citing the need to protect civilian populations in such situations. The resolution also authorizes financial sanctions against terror organizations and their activists and imposes travel restrictions on six Islamic State members.

The resolution centers on the need to contend with “foreign fighters”— that is, people who travel to somewhere other than their state of nationality or place of residence, in order to plan or carry out terrorist activity or to assist or participate in such activity. The resolution also considers people who travel in order to undergo training for future terrorist activity to be "foreign fighters."

The resolution denounces the participation of foreign fighters in the Islamic State and other organizations, noting that this exacerbates the armed struggle being waged in Iraq and Syria, and calls upon UN member States to take steps to stem the increasing flow of foreign fighters. It also calls upon UN member States to prosecute people involved in the activities of the Islamic State or other terrorist organizations such as al-Qaida. In recent years, this call has appeared repeatedly in UN Security Council resolutions related to the war on terrorism, along with other measures such as travel restrictions and the freezing of assets.

On the practical level, the prosecution of Islamic State activists in the courts of UN member States can be conducted in the framework of internal criminal proceedings in States that have judicial authority to prosecute such activists; for example, in the terrorist’s State of nationality. States can also initiate criminal proceedings against foreign citizens under the principle of universal jurisdiction, which enables states to prosecute individuals for international crimes that are committed anywhere in the world, regardless of the existence of traditional avenues of jurisdiction in criminal law (such territorial or personal jurisdiction).
In addition, the resolution tasks UN member States with working to prevent ideological extremism that leads young people to join the ranks of terrorist organizations. To achieve this goal, it is essential to work with the local communities and their leadership, to educate against incitement, and to confront the challenges posed by the Internet, including the dissemination of ideology via social networks and websites.

The UN Security Council resolution is an important step in the international community's creation of a uniform and unified front against terrorism in general and against the Islamic State in particular. However, the resolution neglected to address two important issues in this fight.

There is no doubt that the actions taken by a growing number of States against the Islamic State may be justified by the need to reduce the scope of the atrocities committed by this group. The fact that the Security Council convened and adopted a resolution seeking to thwart the Islamic State is very important, as it creates a legal and political basis that will help in the struggle against this terror organization.

However, the Security Council did not contend with one of the important questions in the fight against the Islamic State: the legal basis of the military attacks against the organization. These attacks are taking place in the territory of two sovereign states, and there is considerable doubt regarding the consent of one of those two states to the military activity taking place in its territory. It is therefore regrettable that the Security Council did not take advantage of the opportunity to build the necessary legal foundation that would contribute to the legitimacy of this activity.

Similarly, the Security Council instructed UN member States to prosecute foreign fighters who are participating in the activities of terrorist organizations in general and the Islamic State in particular. At the same time, however, it refrained from referring the conflict to the International Criminal Court for investigation. Referring the conflict to the ICC is important because it would create an additional channel for indicting the activists of the Islamic State, while conveying the message that the international community is united in its efforts to fight terrorism in general and the terrorism of the Islamic State in particular.

Prof. Amichai Cohen is a Research Fellow in IDI’s National Security and Democracy project, and is the Dean of the Faculty of Law at the Ono Academic College, where he is a Professor of International Law.

Adv. Tal Mimran is conducting research as part of IDI's National Security and Democracy project and is the co-author of IDI's Hebrew Terrorism and Democracy Newsletter.

Prof. Yuval Shany is an IDI Senior Fellow and the Hersch Lauterpacht Chair in International Law at the Law Faculty of the Hebrew University of Jerusalem.