On July 7, 2014, Foreign Minister Avigdor Liberman, Chair of Yisrael Beiteinu, announced his intention to dissolve the partnership between his party and the Likud. In this article, IDI researcher Assaf Shapira explores the implications of such Knesset faction splits. 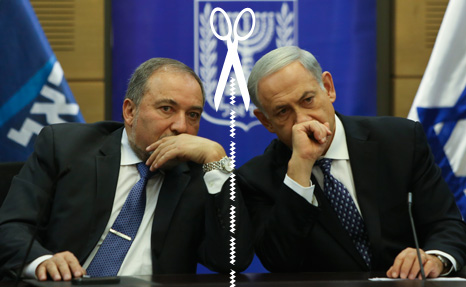 A political party is the basic organizational unit in the Israeli democratic system. In the period leading up to Knesset elections, a party or combination of parties may present a list of candidates that will run in the elections. If this list is elected to the Knesset, its members serve in the Knesset as a single faction. It follows, then, that if a joint list that was based on two parties is elected to the Knesset, a faction is created in the Knesset that represents the two parties.For further discussion on this phenomenon, known as "pre-election coalitions," see Assaf Shapira, "Israel's Political Parties on the Way to the Knesset: Pre-Election Coalitions," in  Gideon Rahat, Shlomit Barnea, Chen Friedberg, Ofer Kenig (eds.), Reforming Israel’s Political System, Jerusalem: The Israel Democracy Institute (2013), pp. 250–274 (Hebrew). Some people believe this is a desirable phenomenon since it reduces the number of Knesset factions and contributes to the formation of larger factions, which is likely to improve parliamentary stability and capabilities of governance.

In the 2014 Knesset elections, two independent parties, the Likud and Yisrael Beiteinu, ran on a joint list. Following the elections, a 31-member faction was formed in the Knesset, representing the two parties: Likud–Yisrael Beiteinu, better known as Likud Beiteinu.

One of the main arguments put forward by Prime Minister and chair of the Likud Benjamin Netanyahu, Liberman, and their political counselors in favor of running on a joint list was that the united list would most likely gain more seats than the two separate lists. Even before the last elections, Or Tuttnauer argued in a Hebrew article on this site  that this is not a likely outcome. He asserted that from a theoretical point of view, Israel's proportional electoral system does not encourage joint lists (other than in cases of small parties that have difficulty passing the electoral threshold), and that the method of forming the government after the elections, in which the President of Israel assigns the task to the candidate with the highest chances of receiving majority support in the Knesset, favors the largest bloc rather than the largest faction. From an empirical point of view, past experience has shown that running on joint lists does not necessarily result in better electoral outcomes than running separately. And indeed, the result of the joint Likud–Yisrael Beiteinu run was rather disappointing: the combined list won 31 Knesset seats, as opposed to the 42 seats that were previously held by the two parties when they ran in the 2009 elections separately.

The Dissolution of a Joint Faction

The composition of factions may change during a parliamentary term for various reasons, including faction-splitting.For further discussion on splitting of factions, see Assaf Shapira, "Splitting of Factions in a Changing Parliamentary Reality," in  Gideon Rahat, Shlomit Barnea, Chen Friedberg, Ofer Kenig (eds.), Reforming Israel’s Political System, Jerusalem: The Israel Democracy Institute (2013), pp. 274–283. Faction-splitting occurs when one or more members of Knesset leave their original faction. Some argue that faction splits have a negative effect on the political system—for example, by contributing to the formation of small factions, which has a negative impact on governance and stability—and should therefore be restricted. Several countries, including Israel, have adopted such restrictions. In Israel, for example, if less than a third of the faction members split off from the faction, the defectors face severe sanctions; among other penalties, if they do not resign from the Knesset when they leave the faction, they may not become a member of the government during that parliamentary term, and may not run for Knesset in the next elections on a list that is represented in the current Knesset. There are also sanctions related to damage to party funding. It should be noted that even if more than a third of the members of a faction split from the faction, they still face certain sanctions. For example, if the split occurs during the first two years after the elections, the faction members who leave the faction are not entitled to receive government funding for their general operating expenses, as they would be if they were to remain a part of the faction.

None of these sanctions, however, relate to cases in which "the split is of a faction that is a combination of [a number of] parties" (Knesset Law, article 59(2)). In cases in which a faction that was composed of several parties is broken down into the original parties that comprise it, there are no sanctions at all. One of the principal aims of this "exemption" from sanctions is to encourage parties to run on joint lists: if the parties know that they will be able to split and set up independent factions at any time, they will not be afraid to run together with other parties. This exemption is justified, since, as previously noted, the Knesset has an interest in encouraging joint lists, as they that lead to the formation of large factions.

As it currently stands, however, the exemption from sanctions is somewhat extreme. In the existing situation, a faction based on a joint list could split into its component parties immediately following the elections with no sanctions whatever. This would violate the trust of voters who voted for a joint list and, of course, harm the stability of the Knesset and its ability to govern. For these reasons, the research team of IDI's Forum for Political Reform in Israel recommended imposing sanctions on such splits that would be similar to the sanction imposed when more than one third of the members of a faction split off: If the said split takes place within the first two years following the election, the Knesset members who split off from the faction would lose their entitlement to funding for general expenses.  Ibid. p. 283.

Had the proposal of the IDI research team been accepted, sanctions would be imposed on Yisrael Beiteinu in response to the current split, since it is taking place less than two years after the elections, and the new faction that is being set up by the representatives of Yisrael Beiteinu would not receive funding for general expenses during the current Knesset term. It is difficult to know whether Avigdor Liberman's decision to break up the partnership would have been different, but there is no doubt that he would have taken the financial consequences into account together with his other considerations.

The first consequence of Liberman's decision to split the parties is increased divisiveness in the Knesset as a whole and specifically in the coalition, since from now on there will be more factions in the current Knesset and coalition government. As noted, there is concern that this increased division may affect the Knesset's stability and capability for governance. A further significant consequence is reduction of the ruling party's power as compared to the power of the other parties of the coalition, which may decrease its ability to administer and sustain the coalition. Following the split, the coalition will be based on one faction: the Likud, which has only 20 MKs and makes up only 29% of the members of the coalition (68 in all).

This kind of situation, in which the relative size of the ruling faction within the coalition is small, has typified Israeli politics since 1996, when direct elections for the prime minister had a negative impact on the power of the large parties. Prior to that, there had also been multi-party coalitions in Israel, but the ruling party almost always had a dominant core of control in them. Since 1996, however, there has been only one time when the governing faction has had a majority within the coalition: when Ariel Sharon formed the Likud government following the elections of 2003.

The Relative Size of the Ruling Faction within the Coalition (By prime minister; in percentages)

Likud and Yisrael Beiteinu formed a combined faction based on expectations of better electoral gains and on the interests of their individual parties. Disappointment from the election results and the realization that the unification may have harmed both parties, in addition to frictions between the parties and between their leaders, led the joint faction to split. Henceforth, each party will operate as a separate faction, although for the time being they will continue to cooperate within the coalition.

While the step taken by Liberman may benefit the two parties, in the broader perspective, it is not likely to benefit Israeli democracy: it will increase division in the Knesset and will have a negative impact on Likud's ability to manage the coalition and the government. Furthermore, dissolving the partnership between the two parties was not inevitable in the current situation: The history of the Knesset is rife with instances where political parties ran for Knesset on a joint list, and later merged into a single party. The Likud party, for example, is the result of a merger between the Herut party, the Liberal party, and others, while the Labor party is the result of a combination of Mapai, Rafi, and Ahdut Ha'avoda.

What could have been done to encourage the continuation of this partnership? Not much. Had there been a prohibition against faction splits during a Knesset term, or if there were serious sanctions for such splits, it is likely that Likud and Yisrael Beiteinu would not have run on a joint list in the first place. Nevertheless, it is possible that imposition of a moderate sanction for such splits, particularly if they take place during the early stages of the Knesset term, would be a desirable step that could discourage such splits. One such sanction, which has been recommended by IDI in the past, would be a penalty affecting party funding.