Attorney Amir Fuchs argues that the proposed legislation that would exempt first-time home-buyers from value added tax (VAT) if they served in the military or national civilian service violates the principle of equality for people who do not serve the State of Israel. 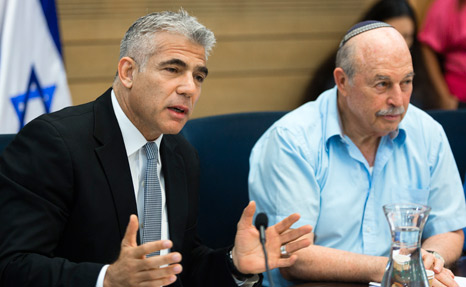 Under cover of the security situation, the Knesset Finance Committee is planning to discuss the bill known as the "0% VAT Law" today. The proposed legislation would provide a tax benefit to new home-buyers who buy homes directly from a contractor by exempting them from the 18% value-added tax on the purchase of a home in Israel. This benefit would be given to any Israeli citizen for any residence that is not valued higher than NIS 950,000. If the prospective home-owner served in the Israel Defense Forces or national civilian service, however, the ceiling on the apartment value would be NIS 1.65 million.

This proposal has been met with overwhelming opposition from Israeli economists, who believe that it will not achieve its intended economic effect of lowering the price of housing and may actually bring about the opposite result instead. But beyond this objection, it must be stated clearly, as it was said by Attorney Eyal Yinon, Legal Adviser of the Knesset: The proposed law is discriminatory and violates the principle of equality for people who do not serve the State of Israel. Compensation for years of service can and should be provided by increasing the salaries of those who serve during their service and by increasing the demobilization grant that they receive upon completion of service. I wholeheartedly support such compensation, and that is how we should be rewarding and encouraging military and civilian service in a way that preserves the value of equality.

The tax benefit awarded for home-buying, in contrast, is not directly connected to the military or civilian service that was performed; rather, it only applies to the specific situation of buying a home. Moreover, the bill at hand does not prescribe a different benefit rate that is influenced by the service performed; rather, it actually sets a threshold, whereby when someone who did not serve buys an apartment that is valued over NIS 950,000, they will not receive a discount at all, while someone who did serve will.

It is important to remember that Arab and ultra-Orthodox Israelis are not evading military or national service. Throughout this country's history, Israeli governments have chosen not to draft members of these groups (in the case of the ultra-Orthodox, this was even formalized by Knesset legislation). Similarly, the possibility of performing national civilian service has not always existed, and even today, civilian service is not always possible for everyone who would like to serve. Given these conditions, it is wrong to impose sanctions on people who did not serve—and withholding benefits is a kind of sanction—especially in the case of specific populations, such as Israeli Arabs, who were exempted from service for reasons related to national security and morality.

This blow to equality also affects those who do serve. The proposed legislation offers "rewards" for military service that are not based on the length or nature of the service, as they should be, but on a person's ability to buy a home. A person who served the country but does not have the financial resources to become a home-owner does not receive this state benefit. Furthermore, the size of the benefit increases as the value of the apartment increases (up to the price ceiling). This makes no sense if the purpose of the law is to reward those who serve the country. Some people who served in the army or did national service may need money for other important purposes and accordingly may not want to buy an apartment. Why discriminate against them in in favor of people who buy homes? And why limit the legislation only to the purchase of first homes and in so doing discriminate against people who may have purchased a modest apartment in the past, taking significant loans to do so? Should the service of someone who already bought a home not be rewarded as well?

The Knesset would do well to stop promoting this bill, which will not only fail to reduce housing prices but will also deal a major blow to equality by excluding the populations that do not serve in the military or civilian service.

On July 7, 2014, Prof. Mordechai Kremnitzer and Attorney Amir Fuchs of the Israel Democracy Institute submitted a legal opinion to Knesset Member Nissan Smoliansky, Chair of the Knesset Finance Committee, pointing out the flaws in the planned legislation to exempt first-time home owners who had served in Israel's military or performed national civilian service from paying value added tax on new apartments bought from contractors. The legal opinion argued that the proposed legislation violates the equality of those who do not serve in the military—especially Arabs and ultra-Orthodox Jews—and that it is disproportional, lacking a logical connection between the means and the professed goal of lowering housing prices.

This article was first published in Hebrew in Haaretz on July 9, 2014.