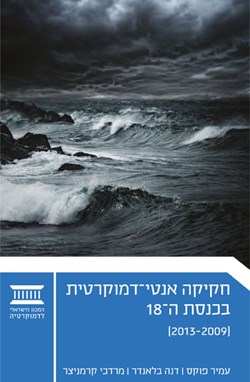 Israel's 18th Knesset (2009–2013) was characterized by a wave of anti-democratic legislation. One after another, bills were put forward that compromised equality, that had serious repercussions for freedom of speech, protest, and association, and that damaged Israel's Arab minority and the status of the Supreme Court. While most of these bills were not passed into law in the end, some of them passed their Knesset readings and entered the law books of the State of Israel. These include the "Boycott Law," the "Admissions Committee Law," and the "Nakba Law," as they are commonly known.

This volume provides a detailed analysis of the series of bills put forward in the 18th Knesset that infringed democratic values. It presents expert opinions and articles that were written by IDI scholars in real time and that were published in the media and submitted to policy-makers at various stages of the legislative process. This volume also presents an in- depth analysis of the general phenomenon of anti-democratic legislation in Israel. The authors examine the cumulative damage that such legislation has done to Israeli democracy and discuss why the wave of legislation appeared when it did.

Understanding the big picture and the reasons behind anti-democratic legislation is vital for continuing the fight against this trend and strengthening democratic values in Israel.

During the term of the 18th Knesset (2009–2013), we witnessed a phenomenon that is unusual in Israeli politics. During this term, the Knesset debated an endless series of bills whose common thread was a very strong tendency—in both intent and result—to infringe on democratic values. Few of these bills were ever passed, in one version or another, and enacted into law. During those years, the researchers at the Israel Democracy Institute were actively engaged in identifying, studying, and attempting to counter this phenomenon. In the present volume, we review the general phenomenon of what we call “anti-democratic legislation.” We offer examples of such legislation along with the position papers, incorporating our criticisms of the bills, which were submitted to decision-makers at the time, and examine the reasons for the outbreak of such a wave of legislation at the time.

The term “anti-democratic legislation” is controversial in and of itself. For how can a law, enacted in accordance with democratic rules of procedure and passed with the required majority on every reading by a legislature that was chosen in democratic elections and by a democratic majority, be anti-democratic? People often raise the counter-argument that opposition to such a law is anti-democratic. The contention, sounded increasingly in our society, is that democracy is majority rule and nothing more. Those who oppose such legislation are accused of being “anti-democratic” because they seek to thwart the will of the majority. According to this line of argument, the Government was formed on the basis of the Knesset elections, and once in office can do anything it wishes. If we accept this assumption, it is indeed the case that none of the bills introduced or laws enacted is anti-democratic.

But this thin and narrow definition of democracy no longer passes muster in a modern democracy. How can there be democracy without human and civil rights? Without freedom of expression? Can there be a democracy without a separation of powers and a system of checks and balances? Can a system that holds democratic elections but in which the majority tramples the rights of the minority really be called “democratic”?

All agree that a regime cannot be called democratic if it does not satisfy the basic requirements of formal democracy. Essential conditions for democracy are, accordingly: regular, free, and fair elections; compliance with the principle of majority rule; and the existence of certain procedures for passing legislation and resolving conflicts. Even this formal dimension of democracy cannot exist without a number of fundamental freedoms—those same freedoms that are needed for elections to be meaningful and for citizens to provide rational feedback to the government between elections.

Even the thin and formalistic definition of democracy grants prime importance to some of the classic civil and human rights: the right to vote and be elected, freedom of religion and opinion, freedom of speech and nonviolent political assembly, the right of public criticism and protest, and freedom of information. In the absence of a reasonable ability to exercise all these rights and freedoms, real democracy cannot exist, even in the narrow sense: the freedom to persuade accompanied by agreement to abide by the majority decision. [1]

Without a basis of information about matters of a prerequisite for forming political opinions—and without free competition between the various viewpoints and positions, the majority cannot enjoy public legitimacy and cannot compel the minority to respect decisions with which it does not agree. In the absence of fair play, even the formal dimension of democracy collapses.

We must remember that the formal dimension of democracy can lead to results that are absurd (from the perspective of a modern democracy); for example, laws that forbid members of a particular minority group to board a bus or eat in a restaurant. Let us assume that, after a free and fair election, such a law passes all the requisite parliamentary stages, in conditions that ensure freedom of expression, and receives the support of the majority. Would we still view this country as democratic? When a fundamentalist religious party takes power through the popular democratic process and uses legislation enacted in accordance with all the rules to repress women or members of other religions, is this democracy? To avoid these absurd situations, we must turn to substantive democracy.

In a “substantive democracy,” the individual takes precedence over the state. The principle that every individual has rights equal to those enjoyed by every other member of the society is a fundamental element of society. In the words of Menachem Begin, “We do not accept the semi-official view expressed during the Third Knesset’s term, wherein the state grants rights and is entitled to rescind them. We believe that there are human rights that precede the human form of life called a state.” [2]

Because all citizens have an equal right to life, human dignity, and liberty, they are entitled to participate in public and political life and vote for the people who will balance, in their name and on their behalf, among conflicting rights and between rights and the public interest. The formal aspect of democracy is derived from this fundamental view of the individual’s place and status, but it does not exhaust the essence of democracy. To quote Ruth Gavison:

According to the substantive view of democracy, every infringement of equality infringes on the values that justify democracy in the first place, the same values that form the basis for our willingness to accept the majority’s decision. Substantive democracy may, therefore, seek to limit the formal democracy within it in order not to infringe on those civil rights (primarily those of minorities) whose protection would not be ensured by the standard principle of majority rule. In a substantive democracy, the safeguarding of human rights is a fundamental value that can even outweigh “majority rule." [3]

Even the legislature chosen in free elections is not all-powerful, and the authority with which it has been invested by the sovereign and the people is neither unlimited nor arbitrary. The legislature’s power is limited by basic principles that prevent arbitrariness, such as the principle that a law must be normative and general rather than personal, or the principle that laws are prospective and not retroactive. These rules are meant to safeguard citizens from abusive application of the law. They are also intended to ensure that democracy remains a system of government in which citizens can place their confidence and trust. A law that is nothing more than an expression of power and that has no connection with justice is not worthy of the name. A system of government that permits such legislation will not gain the support of the citizens who must submit to it—and rightly so.

The underlying view of this book is, therefore, that of substantive democracy, and reflects the system that exists in Israel. The Proclamation of Independence; the Supreme Court rulings in the State’s early years that fashioned a judicial bill of rights; the new Basic Laws, enacted in 1992, that enshrined human rights; and more than twenty years of court rulings that refer to them—all these demonstrate that Israel is a substantive democracy. The claim that a law ipso facto possesses democratic validity simply because it was properly enacted is unfounded. The view that the meaning of Israeli democracy is the unfettered ability of the parliamentary majority to do as it pleases is revolutionary. It would demolish the basis of the system of government that has evolved in Israel since its founding, with a great deal of effort, and that is one of the country’s greatest and most important achievements—its substantive democracy. Although, in the absence of a constitution, it remains imperfect, it is without a doubt substantive in nature.

The systematic effort to crush the substantive foundations of Israeli democracy and leave only its shell intact is extremely dangerous. All those concerned with the welfare of Israeli citizens and of the state itself must oppose it with all their might.

Anti-democratic legislation can be divided into four main categories, as a function of the democratic value infringed—although some legislative initiatives overlap two categories and could be listed under both of them.

3. Comparison with Past Legislation

We might ask how this wave of legislation differs from bills that were proposed—and sometimes passed—in the past and that also infringed on human rights. The Supreme Court even struck down some of these laws as unconstitutional; for example, the law that authorized the establishment of privately run prisons. [4]

This wave of legislation is different from problematic legislation of the past in several ways:

In this book, we review the various bills and include the opinions that the authors and other researchers at the Israel Democracy Institute presented to Government and Knesset committees, as well as articles published in the media. We then examine the reasons behind this wave of legislation and ask why it appeared when it did. Finally, we note the serious ramifications of this wave of anti-democratic legislation for Israel’s image as a democratic state, both at home and abroad. We also indicate the entities that can moderate these types of legislative proposals and protect Israeli democracy from those who seek to destroy it from within.

Dr. Amir Fuchs is an IDI researcher who heads the Defending Democratic Values project. His expertise is in Constitutional and criminal law.

Dr. Dana Blander is an IDI researcher who specializes in the political system in Israel.

Prof. Mordechai Kremnitzer is Vice President of Research at the Israel Democracy Institute and Professor Emeritus of the Faculty of Law at the Hebrew University in Jerusalem. He is an expert in criminal law and public law.