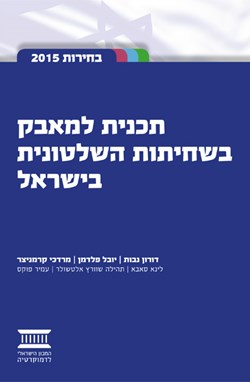 A Plan for Combating Government Corruption

A booklet of recommendations for combating government corruption prepared for Israeli policy makers by IDI experts in advance of the 2015 Knesset elections, based on research conducted at IDI over the years.

In the weeks leading up to the 2015 Knesset elections, IDI compiled a booklet of anti-corruption recommendations for Israeli policy-makers, based on its extensive research in this area over the years. An English summary of this plan for combating government corruption, which was presented at a public meeting attended by Knesset members Yair Lapid and Tzipi Livni, follows; the full Hebrew booklet of IDI recommendations can be downloaded from this page.

Government corruption is a serious and dangerous social ill. It undermines the public good, vital public interests, and equality of opportunity. It violates the duty of public officials and civil servants to act in the interest of the public. It impairs social solidarity, detracts from quality of life, harms economic growth, and destroys public confidence in government institutions and the democratic system.

The vast majority of Israel’s public servants perform their jobs honestly and impeccably. The actions of a corrupt few, however, can taint the entire civil service.

IDI's plan for waging a systematic and uncompromising fight against government corruption is designed to safeguard the rule of law and promote integrity and fairness. Candidates for public office must be men and women with an unblemished reputation. They must see public service as a mission that requires a unique ethos. Candidates who lack personal integrity and have engaged in government corruption should be publically denounced—whether their actions are criminal offenses or violations of public and ethical norms.

Transparency of government activities at all levels is an essential impediment to corruption, conflicts of interest, and misuse of public funds and government resources. Transparency is also a vital precondition for public confidence in the integrity of government agencies. The more that information is presented in a manner that is clear, accessible, and available, the more effective public oversight of government will be.

The fight against corruption must be multi-system and multi-faceted. It must be waged in the legal, educational, and public arenas, both preemptively and reactively, and both the symptoms and causes of this malady must be addressed.

Since we believe that the vast majority of public sector employees have the public’s best interest in mind, it is necessary to create a system that will enable public servants to act in the interest of the public, without finding themselves in situations that are detrimental to their own welfare and harmful to the public. Creating a clear and transparent system for public sector conduct will help the general public and will protect public servants from the pressures of special interest groups.

An effective battle against corruption must be based on deterrence, on increasing awareness of the types of activity that violate the ethics of the public service, and on refining the distinction between appropriate and inappropriate public conduct. While eliminating the “demand” for corruption, it is also vital for the fight against corruption to increase competition in the national economy.

A summary of IDI's plan for combating government corruption follows.