On Tuesday March 30, 2015, the 120 members of the 20th Knesset will be sworn in. About one third of them are new faces, and almost a quarter are women. How many religious MKs are in the Knesset? Which is the "youngest" parliamentary group? Dr. Ofer Kenig explores the demographic attributes of the 120 members of Knesset.

Two weeks after the 2015 elections, the 120 MKs of Israel's 20th legislature are taking office. For almost one third of them, this will be their first time as MKs. The new Knesset will include a record high number of women and Arabs. On the other hand, there is decrease in the number of MKs living in Judea and Samaria and in the share of religious and ultra-Orthodox MKs.

The 2013 elections yielded a record high number of new MKs: 48, which included all of Yesh Atid's 19 representatives and nine each from the Labor Party and Bayit Yehudi (Jewish Home). The high turnover of MKs is continuing into the 20th Knesset as well: 39 new MKs will be sworn in. This time, Likud is sending 11 new faces to the Knesset, followed by the Zionist Union and Kulanu (nine each), the Joint Arab List (six), Bayit Yehudi (two), and Yesh Atid and Yisrael Beytenu (1 each). This count does not include five people who were not incumbents on the eve of the elections, but have previously served as MKs: Moshe Kahlon, Benny Begin, Avi Dichter, Yoel Hasson, and Ayoob Kara.

The previous Knesset included a relatively high number of young MKs: 16 were younger than 40 years old. This time the number has slightly increased to 17. The "youngest" parliamentary group will be the Zionist Union, with five MKs younger than 40, including Stav Shaffir, the youngest MK, who will turn 30 this coming May. The "oldest" parliamentary group is United Torah Judaism (UTJ), with an average age of 62, followed by Shas, with an average age of 58.

Another Increase in Women Representation

Women's representation in the Knesset was very low for many years. An IDI study on the representation of women in Israeli politics that analyzed the issue from a comparative perspective found that the proportion of women in the Knesset is rising steadily and significantly. In the span of 25 years, the number of women in the Knesset rose from a low of seven after the elections of 1988 to a peak of 27 in the 2013 elections for the 19th Knesset (see Figure 1). The new Knesset will include yet another record high of 29 women.  This corresponds to 24.2% of all parliamentarians, a share that ranks Israel 66th in the world.

The highest number of women MKs is to be found in the Zionist Union, which has eight women, followed by Likud (6), and Kulanu (4). Meretz will have a female majority (three women and two men) while Shas and UTJ remain the only parliamentary groups with no women at all.

Figure 1. The Number of Women Knesset Members in Each Knesset (at the time of the Knesset's election) 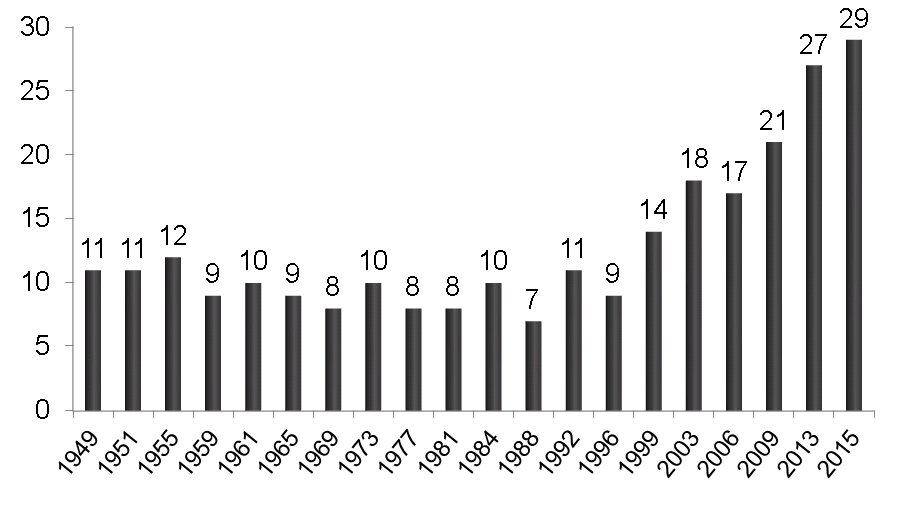 Since its establishment, the State of Israel has absorbed millions of immigrants. It seems that the last wave of mass immigration was in the early 1990s, when hundreds of thousands of newcomers from the former Soviet Union arrived. It is not surprising, then, that the share of citizens of Israel who were born abroad is in decline. This is reflected in the Knesset composition as well.

Following the 1977 elections, Israeli-born MKs were still a minority. After the 1984 elections, 71 of the 120 MKs were Israeli-born MKs and in 2006, the figure was 80. This increase continued and the new Knesset will include 95 Israeli-born MKs and only 25 who were born outside of Israel, on four different continents. Two MKs are from Latin America (Manuel Trajtenberg and Haim Yalin, both from Argentina) and one is American-born (Michael Oren). There are 10 MKs who were born in Africa and another 10 in Europe. The remaining two were born in the Asian parts of the former Soviet Union.

As far as ethnicity is concerned, the new Knesset includes the highest number of Arab MKs ever: 16 (see Figure 2). Twelve of these MKs are members of the Joint (Arab) List, while the remaining four are from the Zionist Union, Likud, Meretz, and Yisrael Beytenu. 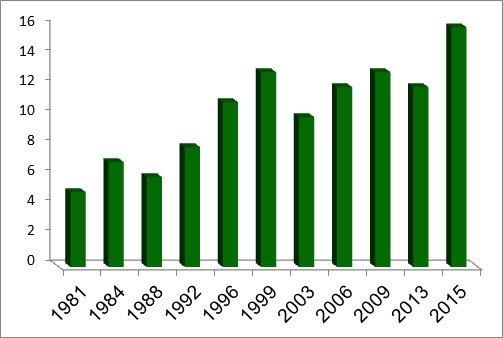 Among the 104 Jewish MKs, there is a decline in the number of MKs with a religious or ultra-Orthodox orientation. Following the 2013 elections, a record high number of almost 40 religious and ultra-Orthodox MKs were elected. In the incoming Knesset, the number will be 27. This decline is mainly the result of the weakening of Shas and Bayit Yehudi (which lost four seats each) and UTJ (lost one seat).

The long-term changes in Israeli society are also reflected in the geographic distribution of the members of Knesset. For instance, in the past, kibbutz members were very prominent and were over-represented in the Knesset. The first Knesset included 24 kibbutz members and in 1984 there were still eight MKs who lived on kibbutzim. Their share declined rapidly and in the new Knesset there are only two kibbutz members: Haim Yalin (from Kibbutz Be'eri) and Eitan Broshi (from Kibbutz Gvat).

In contrast to the kibbutz, the representation of settlers from Judea and Samaria has increased over the years. In 1984, there was a single MK residing in settlements, but in the 2013 elections no less than 12 settlers were elected. The new Knesset will host a slightly lower number of MKs from settlements: 10. The Likud and Bayit Yehudi each have four settlers in the Knesset, and there is one from Yesh Atid and one from Yisrael Beytenu.

Of the members of the new Knesset, 33 live in Tel Aviv and its suburbs, while 16 are from Jerusalem. Only seven MKs are from the southern periphery (defined as an area over 60 kms from Tel Aviv) and 21 live in the northern periphery.

The growing phenomenon of journalists and media personalities entering politics in Israel is continuing. Nearly 15 of the MKs in the new Knesset have a background in media. Among the new recruits are Yinon Magal (Bayit Yehudi), Sharon Gal (Yisrael Beytenu), Zuhair Bahloul (Zionist Union), and Nava Boker (Likud). They join Knesset veterans Shelly Yachimovich, Yair Lapid, Merav Michaeli, Ofer Shelach, and others.

More traditional recruitment channels still feed into the Knesset. Some seem to be in decline, such as MKs who had previous careers in the security forces (IDF, police, Shin-Bet, and the Mossad). Only two of the 39 new faces in the Knesset come from this arena: Yoav Galant and Eyal Ben-Reuven, both former major-generals in the IDF. On the other hand, local politics is still dominant as a breeding place for national politics. No less than 27 of the MKs started their careers in the local arena.

Finally, the new Knesset will include 10 "princes" and "princesses"—that is, second generation MKs. These include the sons of a former President (Yitzhak Herzog), the son of a former Prime Minister (Benny Begin), and also two siblings, Jackie and Orly Levy, who are the son and daughter of David Levy.