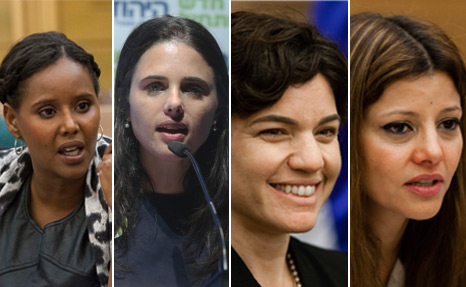 On the one hand, Israel can take pride in its record of inclusion of women in politics. Equal suffrage was granted to women as far back as the first elections for the Assembly of Representatives of the Yishuv (the Jewish community) in Eretz Yisrael in 1920. This was one of the earliest examples of the extensions of suffrage for women in the world. While women in the United States also won the right to vote in that same year, in Spain and Portugal they were denied the right to vote until the beginning of the 1930s, in France and Italy they were only granted the right in the 1940s, and in Switzerland it took until 1971 for them to receive the vote. The State of Israel was also one of the first democracies in the world in which a woman reached the highest level of leadership: Golda Meir became prime minister of Israel in 1969. Only two women in the world, in India and in Sri Lanka, achieved that position in their countries before her.

In the last decade, women have been appointed to several senior key positions in Israel and have broken the male hegemony. Two women have served as President of the Supreme Court (former president Dorit Beinisch and current President Miriam Naor), a woman has served as Speaker of the Knesset (Dalia Itzik), and a woman has been appointed to the position of Governor of the Bank of Israel for the first time (Karnit Flug).

On the other hand, women's representation in the Knesset was very low for many years. An IDI study on the representation of women in Israeli politics that analyzed the issue from a comparative perspective found that the proportion of women in the Knesset is rising steadily and significantly. In the span of 25 years, the number of women in the Knesset rose from a low of seven after the elections of 1988 to a peak of 27 in the 2013 elections for the 19th Knesset (see Figure 1). The party that had the largest number of women in the outgoing Knesset was Yesh Atid, with eight women among its 19 members of Knesset. The Likud Beytenu faction had seven female members of Knesset out of a total of 31 MKs, while the Labor Party had four female MKs out of a total of 15. Meretz was the only faction in the outgoing Knesset that had equal representation of both genders. In contrast, three factions excluded women completely and did not even include any women as candidates on their list: Shas, United Torah Judaism, and Ra'am-Ta'al.

Figure 1: The Number of Women Knesset Members in Each Knesset (at the time of the Knesset's election)

According to the most recent public opinion polls, it is expected that the 20th Knesset, which will be elected on the 17th of March, will maintain the record high level of women's representation in the Knesset that was reached in 2013. An analysis of four surveys conducted from February 24–27, 2015, which cross-checked the candidates on each list, revealed that the number of women who are expected to be elected to the 20th Knesset will be in the range of 26–28. The chances that there will be fewer women than this in the Knesset are slim (unless Meretz fails to pass the electoral threshold), while there are certain scenarios in which it is possible that the number of women in the Knesset could exceed 30.

If we assume that 28 women will be elected to the next Knesset, the rate of representation of women will be 23.3% of the total members of the Knesset. As of today, this rate will rank Israel only in 70th place out of all the countries in the world. In other words, there are 69 countries where the proportion of women in parliament is higher than it is in Israel. As can be seen from Table 1, although this number of women would be a slight improvement in the percentage of women in the Knesset, Israel's ranking internationally is actually likely to decrease from the peak rate that it had reached in 2013.

The Percentage of Women in Parliament:
Israel's Position as Compared to the World

Thus, the road to gender equality in the political arena in Israel is still long. Even if we assume that it is not possible to reach total equality in Israel, since there are political parties that exclude women from serving in the Knesset, steps must be taken to incentivize parties to include more women in their lists candidates for the Knesset. In the policy paper cited above, which was published in mid-2013, IDI's research team issued the following key recommendations: