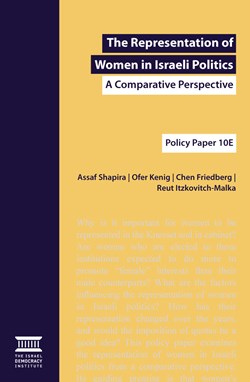 For the past decade, the issue of women’s representation in the political arena has taken center stage in academia and in public discourse.

For the past decade, the issue of women’s representation in the political
arena has taken center stage in academia and in public discourse.
Underpinning the debate is the normative assumption that women’s
representation in politics, and parliaments in particular, carries
great importance: it is consistent with the values of equality and
representativeness, grants legitimacy to the democratic-liberal regime,
and helps inculcate a view of women as citizens of equal standing with
men.

From a historical perspective, although there has been a genuine improvement in women’s parliamentary representation in many countries in recent decades, in most cases equality has still not been achieved. This has led countries and parties that are aware of the importance of this issue to implement institutional measures aimed at improving women’s representation in the political arena.

The study also assesses the institutional mechanisms adopted in Israel to enhance women’s representation in the Knesset, and proposes strengthening and supplementing the existing measures.

What does this survey teach about women's representation in Israeli politics?

Why are women underrepresented in the Knesset? How can this situation be improved?

The research literature enumerates a range of factors affecting women’s parliamentary representation. Many of these are sociocultural factors that are difficult to change, certainly in the short term: political culture, religious attitudes, women’s education, and their participation in the work force, to name a few.

However, this institutional feature actually makes it harder
for women to be elected. Israel’s legislature is one of the smallest
parliaments in the world, relative to the number of citizens.

As such, one idea is to enlarge the Knesset to 180 representatives, which would not only increase the total amount of women, but their proportion in parliament as well, however moderate such an increase, would be.