IDI Researcher Dr. Ofer Kenig analyzes the results of the 2009 Israeli general election elections as they pertain to women's representation in the Knesset.

The large number of parties comprising the 18th Knesset—a total of twelve—guarantees that forming a new government in Israel will not be an easy task. Nonetheless, the new Knesset has already achieved a major accomplishment: a record number of female members. With 21 women—representing 17.5% of the parliament—there are twice as many female representatives as there were in the Knesset in the 1980s.

Seven of the 28 representatives of the Kadima Party are women; Likud and Israel Beiteinu's lists each include five women; and the Labor Party list has three. Hanin Zoabi, a representative of the Balad Party, is the first woman in Israeli history to represent an Arab party in the Knesset. 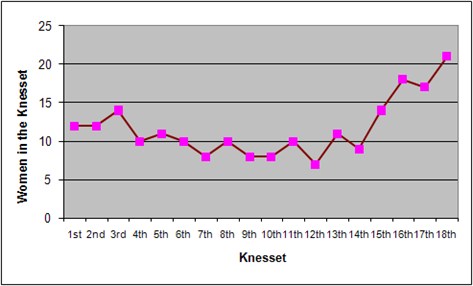 Compared to other democracies, Israel's female representation is considered ‘average’. Notwithstanding the impressive progress in the recent elections, Israel ranks 80th in a list of 170 countries—well behind Sweden, Holland, Argentina and Spain. In these countries, women comprise over one-third of the parliament. Israel's standing, however, is on par with the United States, France and the United Kingdom, where women comprise roughly one-fifth of the members of parliament.