On December 31, 2013, Israel released 26 convicted terrorists to the West Bank, East Jerusalem, and Gaza. This was the third of four such "confidence building" measures that were a precondition for the resumption of peace talks between Israel and the Palestinians. In an article in Haaretz, attorney Amir Fuchs argues that such releases degrade Israel's criminal justice system. 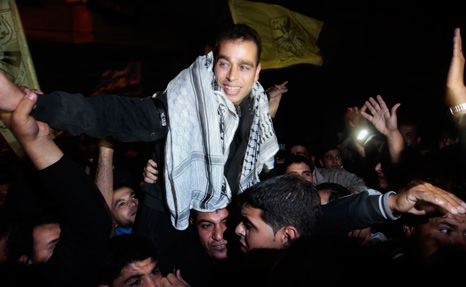 The recent public debate surrounding the release of convicted Palestinian murderers, has primarily focused on whether there were diplomatic alternatives available to the government, as well as on the understandable and justified opposition of the bereaved families to the release. The fact that the debate has been reduced primarily to the question of releasing convicted murderers or criminals with "blood on their hands"—as if the release of prisoners who merely attempted murder, caused injury, or simply participated in smuggling weapons used for terrorism is acceptable and is not subject to debate—is indicative of the imbalance facing Israel regarding the tension between law enforcement and other interests that the State sees as vital.

It is important to add to the discussion a significant consideration that practically goes without saying, yet has been pushed aside for lack of a "lobby" to support it: the irreparable damage that such releases, whether they are conducted as part of prisoner release deals or as part of diplomatic negotiations, do to the rule of law in general and to the goals of the criminal justice system in particular.

Criminal justice is not just about retribution or revenge for the victims and their families. A very important purpose of criminal law is deterrence—both personal deterrence (deterring the defendant from repeating his actions) and also and most importantly deterring others; that is, making the action seem unprofitable in the eyes of potential future criminals. Routinely making deals in which criminals convicted of serious crimes are released severely affects the efficacy of deterrence. When these releases become routine, it becomes impossible to ignore the fact that people contemplating terrorist attacks against Israel will think it is a real possibility that they will not serve their sentence; rather, they will return to their families early as glorified heroes. As a result, despite the fact that carrying out an offense within the framework of a terrorist organization is supposed to be an aggravating circumstance for sentencing, in reality, carrying out an attack as part of a terrorist organization ultimately is a mitigating circumstance.

Moreover, criminal law carries an important message of denunciation and condemnation of the act that was done, and expresses an educational message of respect for the values that are meant to be protected by law (in this case: the sanctity of life). The act of releasing terrorists who were convicted of murder damages these messages. It also allows for the glorification of released prisoners on a special collective "Release Day," as opposed to having each prisoner released upon completion of his or her individual sentence. Early releases also harm the educational message of respect for the value of life, and even broadcast a message of contempt for that value.

On the more general level of the rule of law, the release of murderers creates a sense of injustice and disregard for criminal proceedings and for the legal system as a whole. In this situation, when murderers are released early and are not serving their sentences, and when there is a legitimate feeling that injustices that were predictable from the outset are being committed systematically, do not be surprised if there is an increase in lynching at the site of terror attacks—even if there is no justification whatsoever for such behavior—by citizens who wish to take justice into their own hands because they have lost their faith in the justice system.

In addition, every time there is a deal of this nature, it renews the debate about the death penalty. This article is too short to address how inhumane and harmful this punishment—which has been abolished in all democratic countries except for the United States—is, in all respects. Anyone who opposes the death penalty must remember that releasing murderers strengthens and incentivizes those who advocate for the death penalty in Israel. This is a danger that is not to be ignored.

Particularly those who, like me, believe that criminal law—with its protections such as due process, the rules of evidence, and punishment that is both appropriate and not disproportionate (which would exclude the death penalty)—should continue to be applied even to crimes of terrorism, should wholeheartedly oppose the inherent erosion of the goals and legitimacy of the criminal process that is caused by the various prisoner releases.