The steady increase in the percentage of women in Israel's parliament has not been accompanied by a concomitant rise in their cabinet representation. In this article, IDI researcher Dr. Ofer Kenig asserts that the new government now being formed provides Israel with a golden opportunity to rectify this situation.

In February 1969, Golda Meir was appointed fourth prime minister of the State of Israel, thus becoming one of the first women in the world to serve in her country’s highest political office. Despite this achievement, however, the inclusion of women in Israel's cabinets is far from impressive. During the first 26 years of the State (1948–1974), there was only one woman cabinet minister—Golda Meir, who later became prime minister, as noted; otherwise, the cabinet was entirely devoid of women. The next women to become cabinet ministers were Shulamit Aloni (1974), Sara Doron (1983), Shoshana Arbeli (1986), and Ora Namir (1992). Until 1995, after 47 years of Israel's independence, only five women had ever served in Israeli cabinets. Since 1996, the situation has improved, slightly, with eight additional women appointed as ministers (see Table 1). As of February 2013, only 13 of the 221 people who served as Israeli cabinet ministers in all of Israel's history—less than 6%—have been women.Seven other women reached the position of Deputy Minister: Miriam Tassa-Glazer, Masha Lubelsky, Marina Solodkin, Dalia Rabin-Pilosof, Naomi Blumenthal, Gila Gamliel, and Lea Nass.

Table 1: The 13 Women Who Served in Israeli Cabinet

The low level of women’s representation in Israeli cabinets becomes even more significant when we consider the nature of the portfolios assigned to women, the number of women who have served simultaneously in the same cabinet, and Israel’s place among other well-established democracies in this respect.

Which Portfolios Are Allocated to Women?

The allocation of executive portfolios to cabinet ministers is one of the central mechanisms in establishing governments in parliamentary democracies (Laver and Shepsle 1990). The power of a given party in the government is measured not only based on the number of portfolios but also the importance of the portfolios received. The same is true in assessing the power of women in a given cabinet: counting the number of women around the table is insufficient; we must also examine the importance of the portfolios that were assigned to them.

The importance of certain portfolios, of course, may vary from state to state or from one political system to another. According to Druckman and Warwick (2005), the most important ministries are Foreign Affairs, Finance, and the Interior. In the Israeli context, we should add Defense, in light of its high budget and high prestige. The second tier of portfolios comprises important economic ministries (e.g., Construction and Housing; Industry, Trade, and Labor; and Communications), budget-intensive ministries (e.g., Education, and Health), and the prestigious Ministry of Justice. In the third tier are the minor and less prestigious ministries such as Tourism, Immigrant Absorption, and the Environment. Ministers without portfolio are in the lowest tier.

Three of the four top-tier ministries have never been held by women: Finance, Defense, and Interior. While women’s absence from the Defense ministry could possibly be seen as “obvious,” it is surprising that Israel has never had a woman minister of finance or the interior. The only senior ministry ever headed by a woman is the foreign ministry. Golda Meir served as foreign minister in 1956–1966, and Tzipi Livni was Foreign Minister in 2006–2009.

*During part of this period, Tzipi Livni was Minister of Justice and
Minister of Construction and Housing At the same time.

How Many Women Have Served as Cabinet Ministers at Any Given Time?

Another analysis that demonstrates the marginality of women in the Israeli government examines how many women were in the cabinet at any given time. For example, at the time of its investiture (March 2009), Netanyahu’s second government included only two women out of 30 ministers. In early 2011, after the Labor Party split and the Atzmaut faction was established, an additional woman from Atzmaut, Orit Noked, was appointed to the cabinet. In other words, as of this writing, women account for only 10% of all ministers. This is a rather low rate but is hardly unusual. In fact, at any given time, no more than three women have ever served in the same Israeli cabinet (Kenig and Barnea, 2009).

As mentioned above, until 1966, there was only one woman cabinet minister in Israel—Golda Meir. In 1974, with Meir’s resignation, Shulamit Aloni, the head of the Citizens’ Rights Party, was appointed minister without portfolio in Yitzhak Rabin’s first government. She resigned several months later, however, and the cabinet was left with no women’s representation. The absence of women in the cabinet persisted until after the political “upheaval” of 1977, and it was only in 1983 that Menachem Begin appointed Sara Doron as a minister without portfolio. This ended a period of nine consecutive years in which the cabinet included no women whatsoever.

Surprisingly, even the 1984 National Unity Government, which with 25 ministers was the largest government until its time, included no women. It was only in 1986 that Shoshana Arbeli joined the cabinet, and in 1988 it was left without women once again. The 1992 upheaval led to a precedent: For the first time in history, Yitzhak Rabin’s second government included— two women cabinet ministers: Shulamit Aloni and Ora Namir. Another precedent emerged in March 2001, when Ariel Sharon’s first cabinet included, for the first time, three women: Dalia Itzik, Limor Livnat, and Tzipi Livni. Since this cabinet was also extremely large, with 30 members at its peak, however, the percentage of women’s representation was still only 10%.

What Happens in Other Democracies?

As mentioned above, there are only three women serving in the present Israeli cabinet, constituting 10% of all cabinet ministers. This is a very low percentage in comparison with other countries in the world. The annual Global Gender Gap Report, published by the World Economic Forum, includes data on the representation of women in cabinet. The most recent report (2012) lists Israel in 95th place out of 133 countries (World Economic Forum, 2012: 56). If the comparison is limited to OECD countries, Israel ranks 29th out of 34 countries (see Figure 1). 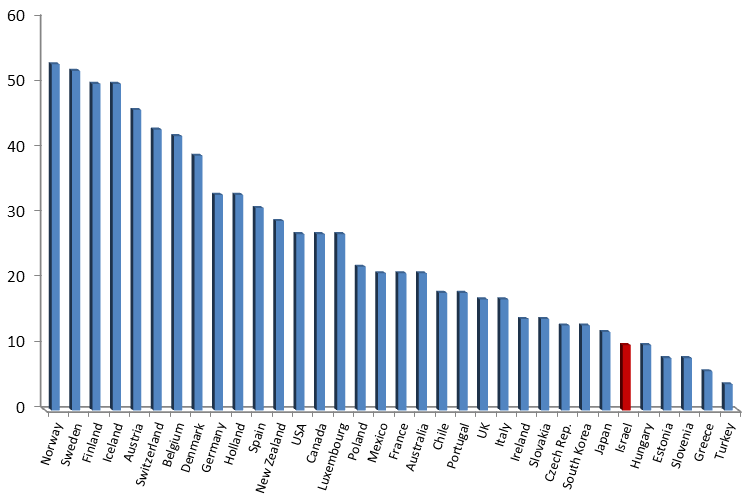 These statistics are particularly discouraging in light of the worldwide trend toward increased women’s representation in cabinet and other leadership positions. From 2007 to 2011, Finland had a cabinet with a solid majority of women: 12 women ministers vs. eight men. From 2008 to 2011, the cabinet in Spain also had a female majority (9 of 17 ministers were women). Today, Sweden and Norway have cabinets with slight female majorities and Finland and France have gender-balanced cabinets.

Moreover, in many democracies, the representation of women in the cabinet is greater than their representation in parliament. This is explained by the fact that cabinet ministers are usually appointed by the prime minister (and, in cases of coalition governments, by the leaders of other coalition parties). Having one person appoint ministers greatly facilitates the formation of a gender-balanced team. Over the past few years, heads of state have been displaying increasing attention to gender balance in the cabinet. In the United States, for example, women accounted for about a third of Obama’s outgoing cabinet, and the cabinet appointed by French President François Hollande in the summer of 2012 comprised an equal number of men and women.

In all respects, the new cabinet that will be formed in Israel following the elections of the 2013 elections is a golden opportunity for Prime Minister Benjamin Netanyahu and his coalition partners to improve women’s representation in the government. The marked increase in the representation of women in the 19th Knesset should facilitate that. After 65 years of independence, the time has come for Israel’s governments to reflect greater gender balance.