The formation of a new coalition in the middle of the night, just as legislation to dissolve the Knesset was about to be passed, left many people wondering if this was an example of Israeli politics at its best or its worst. Was this a creative solution intended for the good of the people or a deviation from the rules of the political game? IDI Researcher Dr. Dana Blander explores the two sides of this episode, which is likely to redefine what is forbidden, permitted, and worthwhile in Israeli politics. 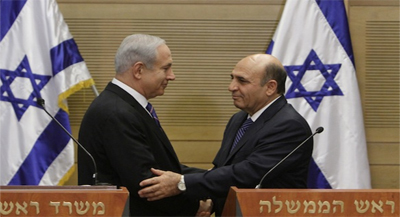 "Mankind always act in order to obtain that which they think good" - Aristotle, Politics, Book I, 1

Anyone who went to sleep on Monday night, May 7, 2012, while still debating who to vote for in the upcoming elections, woke up the next morning and discovered that they could postpone the decision. Although the strong scent of elections had filled the air at the start of the week, they magically disappeared, with the wave of a political wand: the Kadima party, headed by Shaul Mofaz, joined the Netanyahu government, and a unity government was created, as a result of a vague coalition agreement focusing on several key issues such as the Tal Law and electoral reform.

Was the formation of this unity government, in the middle of the night, the finest hour or worst hour of Israeli politics? That depends, of course, on whom you ask—those who were pulling the strings or the audience who watched the show without knowing what was happening behind the scenes. On the one hand, some might say that this surprising development is politics at its best: it demonstrates the ability to find a creative solution and formulate agreements to promote common goals. On the other hand, others will see this move as an indication that the politicians "sold their soul to the devil," and may deem it a "clearance sale" or other such epithets—references that reflect the feeling that this was deal was a deviation from the rules of the political game.

Politics is the art of government. Aristotle defined politics as a practical science aimed at obtaining the good of the citizens. Among political scientists, the term "politics" has multiple meanings, all of which refer to actions designed to promote common goals through the integration of different interests and reaching compromises between them. But when you ask the public what they think of when they hear the word "politics," their associations are almost always negative. They think of corruption, promotion of personal interests, and hypocrisy. The words "politics" and "politicians" have become insults. (Hermann, Lebel, and Zaban, 2008).

Is it possible that politics and politicians are actually "innocent" of these charges, since their actions and behavior are the very essence of politics? That is, are the charges against them unjustified because they are simply playing by the rules of the political game in order to achieve its goals? After all, everyone knows that in order to achieve common goals and to address the problems that confront the political system, politicians must build coalitions, mobilize support, negotiate, compromise, put off decisions, and strike a balance between the good of the public and the varied and conflicting interests of society. At the same time, however, these political means, which are essential for creating and implementing policy, are the reason why politics have such a negative image in the public eye (Gal-Nur and Blander, in preparation).

Complex political situations demand creative solutions and encourage the initiation of processes that are likely to seem puzzling, surprising and even impossible. The history of Israeli politics is replete with such phenomena: the rotation agreement between Likud and Labor after the 1984 elections, the founding of Kadima by combined forces from the Likud and Labor, which created couples that may have seemed impossible before the big bang (which by now may have become the little bang), as it placed Ariel Sharon and Shimon Peres, and Haim Ramon and Tzachi Hanegbi, next to each other. These unions prove that politics is the art of the impossible.

Pulling the Wool over the Public's Eyes

But when do creative political solutions cross the line and become unfair or immoral procedures? Why was the entry of Kadima into the government, under Mofaz's leadership, widely criticized? Is it not a legitimate move?

It seems that in this case we must differentiate between "what" and "how." A party joining the coalition and creating a unity government is a common occurrence in Israeli politics. Some people believe that Israeli public generally has a desire for unity, even if it is imaginary or paralyzing. If this is true, in the current case, it is likely that the criticism of the formation of the unity government stems from the manner in which the plan was concocted rather than from the act itself. Two aspects of the process appear to have given the public the sense that they were swindled: the contradiction between earlier statements by the leaders of the two parties and the establishment of the unity government, and the clandestine nature of the agreement, which was planned while attention was diverted by the proposed legislation to dissolve the Knesset and to move up the elections.

One of the criticisms has focused on the inconsistent behavior of the two personalities: Shaul Mofaz and Benjamin Netanyahu. The former has been described as a "zig-zagger," and the latter as a liar. These claims raise questions about the value of consistency in politics. Montaigne, the French philosopher, said that the most consistent human trait is inconsistency. Given that the political arena is dynamic and complex, there is room to question the assumption that consistency is a supreme value in politics; since consistency may conflict with flexibility, creativity, the ability to improvise, and the capacity to adapt, it may not be appropriate for dealing with dynamic situations. Reversing a position is not necessarily a negative act for a politician, but the public reacts better to such change if it takes place over time and in response to changing circumstances, as seen from Ariel Sharon's attitude change on the Israeli-Palestinian conflict over the years.

Despite the above, people generally expect consistency from others, especially when it comes to leaders, who are supposed to be role models. The public expects politicians to be consistent in the stands they take on issues, expecting agreement between their words, their beliefs, and their deeds. Politicians connect to their voters through their word; they word is the surety that they present to the public. Contradictory statements or discrepancies between words and deeds cause the word to lose its power, leaving politicians mute. Their words are devoid of content, their statements scatter in the wind, and they lose the public's trust. At the same time, however, reality is dynamic , and the public's memory is short. While Mofaz was quoted as adamantly asserting on his Facebook page that he would not join Netanyahu's government, one political event is sufficient to make the public forget such "lies" (e.g., a successful security achievement that will be credited to Mofaz).

Apparently the element of surprise is also not acceptable to the political public. Unlike the past, when the public thought that politics takes place in dark, smoke-filled rooms, nowadays the public believes that politics is unfolding before their very eyes. The press creates the illusion that the public is involved in events that are happening behind the scenes, and social networks and the Internet seemingly eliminate the distance between the politician and the voters. They are all friends on Facebook, and the "political truth" is a status on the social network.

Accordingly, when the public finds themselves surprised by a political development, it reawakens feelings that politics are taking place behind their backs while their hands are tied. Even though many people were not thrilled about the possibility of elections, their feeling that they were deceived triggered discomfort and anger at the political system. This feeling is intensified by the fact that the media was also unaware of the plan, and media professionals were left feeling like they were the unsuspecting victims of a television prank. It turns out that even they were duped by the illusion that they are privy to the secrets of politics.

The current maneuver will be recorded in Israeli political history alongside the "stinking deal" (Kenig, 2010) that brought down the government of Yitzhak Shamir, and will redefine what is forbidden, permitted, and worthwhile in Israeli politics. Borrowing imagery from soccer, it can be said that Netanyahu and Mofaz scored in the 91st minute, when the spectators and opposing team were awaiting the final whistle, but the goal that they scored was "offside." All that remains is to see how the judge—the Israeli public—rules. We'll only know that in the next elections.

Gal-Nur, Yitzhak and Blander, Dana, The Political System in Israel (Am Oved and the Israel Democracy Institute, in progress).

Dr. Dana Blander is an IDI researcher focusing on democracy in the 21st century. She is also a member of the IDI website staff.

Tags:
the government,
Confidence in the Knesset,
Israeli political system