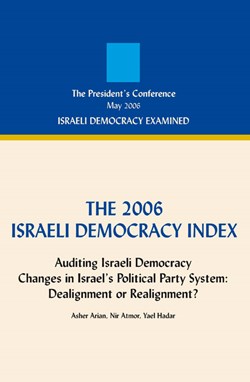 The findings of the 2006 Israeli Democracy Index indicate that Israelis take great interest in politics and are highly knowledgeable about political affairs, but show low levels of actual political involvement. They are indifferent to party politics and no longer consider old party struggles relevant. Few retain a strong sense of identification with one political party or another.

Summary of the Israeli Democracy Index, 2006

Part One:
Updating the Democracy Index 2006

A. Description of the Research and its Goals

B. The Democracy Indicators
1. A Summary Outline
2. Israel 2006 as Reflected in the Indicators: Changes in Comparison to Previous Indices
3. Selected Findings from the Index

C. The 2006 Democracy Survey
1. A Summary Outline
2. The Public Perception of Democracy's Implementation in Israel 2006 According to the Three Aspects
3. Democracy: Support and Satisfaction
4. Events in 2005 and 2006 and their Effects on the Public's Assessments of Various Issues in Israeli Democracy

E. The Voter's Self-Identification with the Parties
1. Party Membership
2. The Personalization of Politics
3. Closeness to a Particular Party
4. Location on the Right-Left Continuum

The 2006 Index, along with the low voter turnout for the last election, emphasizes the fact that Israeli citizens feel apathy towards the political party system. Old struggles between parties are seen as irrelevant, and few citizens maintain strong feelings of identification with any given party. Now more than ever, Israelis are very interested in politics, speak about politics, and stay informed, yet their level of political involvement has decreased. The source of this problem ranges from the low level of feeling that one has the ability to influence public policy, to worrying rates of political corruptness, and low levels of satisfaction from the government and the country’s leaders. All of these factors have apparently brought about a decrease in the voter turnout in the 2006 elections. The repercussions of these disconcerting trends on the legitimacy of the government and of democratic rule should raise serious concern not only among anyone who is involved in politics, but among us all.