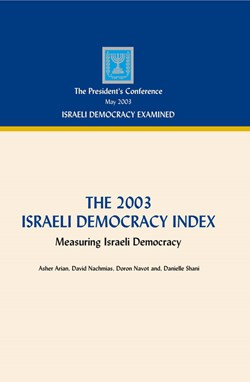 The findings of the 2003 Israeli Democracy Index indicate that Israel is largely a formal and unstable democracy, one that has not yet assumed the characteristics of a substantive democracy.

This research project is based on the assumption that democracy is a multi-dimensional phenomenon. Accordingly, the Democracy Index encompasses three main aspects: the institutional aspect, the rights aspect, and the aspect of stability and social cohesion. Addressing the formal and substantive sides of democracy respectively, the institutional aspect and the rights aspect are meant to include the content embedded in the concept of democracy. The third aspect, stability, is a characteristic of governments in general, not only of democratic regimes. Nonetheless, it seemed right to include it since its existence or absence influences the quality and functioning of democracy.

Likewise, in a representative sample of the adult population in Israel (Jews and Arabs), respondents were asked to what extent, in their opinion, each of the aforementioned characteristics is in fact realized in Israel. With regard to the characteristics that comprise the rights aspect, which express the substantive side of democracy, we examined the degree of support for those values among the general public in an attempt to measure the depth of democratic culture in Israel. The questions posed were included in a survey conducted in April 2003.

The public opinion data for comparison among countries were taken from international studies, mainly from The World Values Survey and The International Social Science Project. The indicators incorporated in the research were developed by various international research institutions, which also provided most of the data, primarily: Polity, Minorities at Risk, The United Nations Human Development Project, The International Institute for Democracy and Electoral Assistance, The International Country Risk Guide, Freedom House, Amnesty International, Transparency International, The Heritage Foundation, and researchers Arthur Banks, Michael Gallagher and Arend Lijphart.

This project surveys existing knowledge in the field of democracy evaluation, with the hope of including as wide a variety of indicators and information sources as possible. Those indicators that best met the following criteria were chosen: validity, reliability, sensitivity, transparency, clarity, specificity, availability of information, and the currency of the data.Unfortunately, in several cases we had to use indicators that did not fully conform to our criteria.

We present here a summary of the current state of Israeli democracy according to its ranking on various democracy scales, several detailed examples from among the indicators, and the main findings of the public opinion survey. The comprehensive data of the indicators and the democracy survey will be published in the near future.

The State of Israeli Democracy

The Rights Aspect: Equality for Minoroties