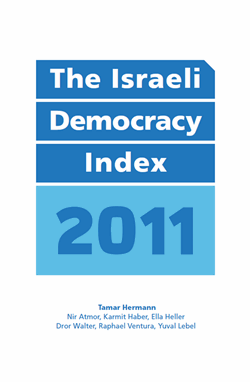 The Israeli Democracy Index 2011 provides an up-to-date, theoretical and practical portrait of opinions held by Israelis regarding the preferred form of government, functioning of the political system, behavior and performance of elected officials and key democratic values. Israel’s stability as a democracy is reflected in this year’s results, not only in many of the opinions on various issues presented, but also in Israel’s status according to international indexes.

The Israeli Democracy Index 2011, the product of research conducted by the Israel Democracy Institute's Guttman Center, aims, like Indexes of previous years, to sketch a theoretical and practical portrait of opinions held by the population of Israel – as a whole and its various subgroups – regarding all that concerns preferred form of government, functioning of the political system, performance and behavior of elected officials and key democratic values. The Index also attempts to identify representations of undemocratic and anti-democratic thought and action that require attention through education and inculcation of values or – in extreme cases – enforcement. The data were gathered in March 2011 by the Dahaf Institute, headed by Dr. Mina Zemach, from a nationwide representative sample of 1,200 adult Israeli citizens (aged 18 and up).