As Operation Protective Edge comes to an end, Prof. Yedidia Stern warns that the Iron Dome could not protect Israel from hatred between Jewish and Arab citizens, and stresses the need for both sides to use imaginative empathy to mend the fabric of Israel's shared society. 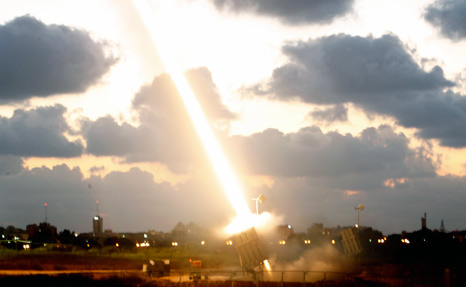 Hamas has failed in its physical attacks on Israel. We prevailed, resoundingly, thanks to the courage of soldiers and commanders, the steadfast resilience of the home front, and the wisdom and foresight of technological innovators. The plan to wear down and break the Israeli spirit failed in the face of a veritable tsunami of solidarity and internal unity. Even patriotism regained its good name.

Nonetheless, there is concern that the campaign waged by Hamas achieved one success, and it is an important one. The Iron Dome failed to protect Israelis from being injured by a deadly and accurate missile: a missile of hatred between Jewish and Arab citizens of Israel, which drives a wedge between different parts of Israeli society. A long and extremely dangerous tunnel is being dug in the individual and collective consciousness of these two populations, in an attempt to undermine their trust and destroy the fabric of their relationship. The actions of Hamas seek to poison our lives with a high-power weapon, the dirty bomb of "racism." How can we—Jews and Arabs—defend ourselves from the scourge of racism that is becoming rampant around us?

Many people paint a bleak picture of Jewish-Arab relations in Israel. Unfortunately, this picture has support not only on the level of practice (equality, for example, does not exist in many contexts), but also on the level of perception: two-thirds of Israel's Arab citizens fear serious violations of their rights and violence on the part of the State of Israel. A similar percentage of Jews fear that Arab citizens of Israel support the struggle of the Palestinian people against the State of Israel. This bleak picture, accordingly, is not imaginary. It is important to emphasize, however, that it tells only part of the story, as can be seen from the following.

The 2013 Index of Arab-Jewish Relations and the upcoming Israeli Democracy Index of 2014, both published by the Israel Democracy Institute, have some revealing findings. A survey conducted before Operation Protective Edge revealed that two-thirds of Israel's Arab citizens were proud or very proud to be Israeli (although 57% of Arab respondents indicated that they saw themselves as being "disadvantaged"). Among Jews, nearly two-thirds of respondents disapproved of giving more rights to Israel's Jewish citizens than to Arab citizens (although three-quarters of Jewish respondents believe that critical decisions regarding peace and security should be made by a majority comprised of Jews only). These findings, as well as many others, indicate that the situation is fluid and perceptions are confused. While the state of affairs is clearly not good, however, it is not desperate, as over half of Israel's Arab citizens were found to recognize Israel's right to exist as a Jewish and democratic state and reported that they would be prepared to vote in a public referendum for a constitution that would define Israel as such, as long as full civil rights would be guaranteed to Israeli Arabs.

The findings of these studies reflect the complexity of the situation and a lack of clarity among most Jews and most Arabs about the future of their relationship. While willingness to co-exist is evident on both sides, stress and strains undermine its foundations. For this reason, the present moment is an important junction in Israel's civic life: Will we allow Hamas to win their campaign by destroying the relationship between Arabs and Jews in Israel?

The response to the attack on the fabric of Israel's civil society must include action. First and foremost, we must ensure full equality for all citizens. But a change in consciousness is necessary for that, which requires both courage and emotional maturity. Both sides must use imaginative empathy. Jews in Israel must imagine themselves in the skin of Israel's Arab citizens, who have been dealing with a situation in which their country and their people on the other side of the border have been killing each other during the past month. At the same time, Arabs in Israel must put themselves in the shoes of Israel's Jewish citizens, whose children have been fighting in defense of their country while some of its Arab citizens have been expressing solidarity with the people who are pointing guns at Israel. How would each of us, Jews and Arabs, feel and act if we were on the other side?

It is easy for people to ensconce themselves behind their own identity and judge others from that vantage point. It is much more difficult—even painful, confusing, and frustrating—to judge others with empathy for their true condition. This is not a call for the two sides to abandon their unique perspectives; rather, it is a prayer that we will be able to understand the plight of the Other.

This call for imaginative empathy is not relevant to racists. Fanatics are not capable of seeing reality from someone else's perspective; they are limited in that respect. But the majority of the Israeli public is not fanatical or extreme. That majority must distinguish itself from the forces at the margins, both Jewish and Arab, who are poisoning the wells. This will alleviate the fears of the majority on the other side and will contribute to the necessary repair. We must slow down the emotional roller coaster that we have been riding and go back to being who we are: human beings, Jews and Arabs, who share a broad civic common denominator—the fabric of a shared society.

This article was published in Hebrew in Yedioth Ahronoth on August 7, 2014.