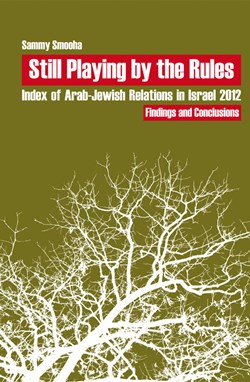 Still Playing by the Rules: The Index of Arab-Jewish Relations in Israel 2012

An English summary of the main findings of The Index of Arab-Jewish Relations 2012.

The Index of Arab-Jewish Relations in Israel, based on public opinion surveys that are conducted annually in the fall, measures attitudes of Arab and Jewish citizens toward each other and toward the state and serves as a tool to monitor trends of change in these attitudes over the years. The Index was inaugurated in 2003 under the aegis of the University of Haifa and became a joint project of IDI and the University of Haifa in 2012. This collaboration seeks to contribute to the study of relations between Arab and Jewish citizens of Israel, to Arab-Jewish coexistence, and to a resilient democracy in Israel.

The 2012 Index is based on a national representative sample of 700 Arab citizens aged 18 and over (including Druze and Bedouin) who were interviewed face-to-face in Arabic, and a national representative sample of 700 Jews aged 18 and over (including immigrants, ultra-Orthodox, settlers, and members of moshavim and kibbutzim) who were interviewed on the telephone in Hebrew or Russian. The margin of error is 3.7%.

3. Conclusions
3.1  Toughening Attitudes versus Stability
3.2  Aversion to Concessions that Would Improve Relations
3.3  National Struggle
3.4  Arab Leadership
3.5  Peace Makers or Spoilers?
3.6  The Infrastructure of Coexistence
3.7  Conditions of Sustained Calm and Stability
3.8  Mutual Red Lines
3.9  A New Formula for a Jewish and Democratic State

Prof. Sammy Smooha is Emeritus Professor of Sociology at the University of Haifa and the winner of the 2008 Israel Prize for Sociology. He studies Israeli society and government from a comparative perspective, with a focus on the Arab-Jewish divide.

Click here for a summary of the extensive press coverage received by the 2012 Index.

On June 30, 2013, IDI hosted a Symposium on the Findings of the 2012 Index of Arab-Jewish Relations, in conjunction with the University of Haifa and the Jewish-Arab Center. Following is an English translation of a Hebrew video interview in which three of the participants share their view of the significance of the findings.

This survey shows that this is not the case. Despite the fact that there is a decline or exacerbation of Arab attitudes toward the State—in contrast to an improvement in the attitudes of Israeli Jews towards Arabs—we can still say that the attitude of Arabs toward the State and toward the Jews overall is positive. For this reason, it is very important for the public to know the results of this survey.

The findings of the survey are worrying. The trends in Israeli society, both among Jews and among Arabs, are concerning. Occasionally you can see a hint that there is a bit of an improvement in several areas. But overall, the delegitimization of the Arab public in the State of Israel continues.

Unfortunately, this trend is found not only on the Israeli street but also among the leaders of Israel’s Jewish society. In Arab society, the positions at the extremes, which are held by the Arab leadership, are beginning to infiltrate the field and to combine with extreme positions within Arab society as well. No one is taking the bull by the horns, the bull of racism and polarization in Israel, and reining it in as necessary.

I think we are actually headed toward confrontation rather than to conciliation between Jews and Arabs. This is an opportunity for Israel's leaders, the Prime Minister and the President, to take the initiative and start real negotiations—internally, within Israel, not necessarily externally. Peace must start at home, between Jews and Arabs in Israel. Twenty-one percent of Israeli citizens cannot be a footnote on the agenda of the public and the government.

The government is largely dealing with economic issues, and is neglecting the political and social integration of Israel's Arab citizens. And that is really a shame. It is now more appropriate than ever. The call that should go out from this conference is: Take the initiative. There are partners in Arab society. There are partners in Jewish society. We simply have to do the work and not simply talk about it.

Prof. Sammy Smooha
Author of The Index of Arab-Jewish Relations in Israel, 2012
Department of Sociology and Anthropology, University of Haifa

The Index is 10 years old. It indicates that over time, attitudes of the Arab public are becoming increasingly more extreme, and there has been an increase in the delegitimization of the Jewish and democratic state—perhaps as part of a larger struggle—as well as greater estrangement. In contrast, however, in Israel's Jewish public, we do not find this trend of exacerbation. This is surprising.

The most important finding of the 2012 Index is that despite the exacerbation of Arab attitudes, the Arab public is not willing to break the rules. That is, it appears that over time, the Arab public has developed an interest in being part of Israel, and in strengthening its bond to Israel, and it has lots to benefit from Israel. This is fairly paradoxical. At the same time that the Arab public supports Arab nationalism, it does not see itself as an integral part of it; rather, it sees itself as part of Israel. Thus, while there is a trend of exacerbation, at the same time, there is a strong foundation for coexistence, a willingness for integration, and the like.