In an article in Haaretz, Attorney Amir Fuchs stresses the need to wage a genuine war against racism, in order to preserve the values of Zionism and safeguard the Jewish and democratic state. 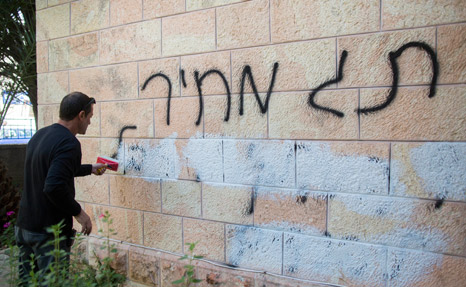 The phenomenon of hate crimes against the Arab citizens of Israel is growing and spreading. Whether they are organized actions or local copycat initiatives, this is clearly a serious and alarming situation that demands strong action by law enforcement agencies. But those who describe it as the work of "extremists" and urge the police and courts to act against it—failing to recognize that it is the leading edge of a much more extensive problem—are either naïve or severely mistaken.

Hate crimes do not emerge out of the blue. They grow as a result of the long and systematic cultivation by substantial segments of the public of a racist conception of the Jew's superiority to the non-Jew. The phenomenon is expressed in overt statements by rabbis, including chief rabbis and those who are not considered extremists; it is also manifested in other ways, such as the call not to rent apartments to Arabs. The same can be said of the activity of "anti-assimilation" organizations, which, in pursuit of their explicit ideal of racial purity, essentially condemn all ties between Jews and Arabs.

Hate crimes do not grow only in the religious context, but also in a national or nationalistic one. For a number of years, the Knesset has been broadcasting to the Arab minority a message of alienation and exclusion, through various bizarre legislative initiatives that demand declarations of loyalty as a way to curtail their equality. Some of these bills were enacted into law. One example is the Acceptance Committees Law, which was unabashedly designed to enable Jews in small communities to keep Arabs out of their towns. The same is true of the proposed Basic Law: Israel, The Nation-State of the Jewish People, which the prime minister has announced he will support. Despite the fancy rhetoric in its latest version, which promises "to protect the individual rights of minorities," the bill sends a message of the primacy of the state's Jewish national character at the expense of its democratic character.

In addition, the foreign minister of Israel repeatedly suggests that the state, if it so wishes, can revoke the citizenship of some citizens and leave them outside its borders, solely because of their ethnic affiliation—thereby making it plain that this is not their country. Even though they are its citizens, their presence here is only temporary.

So beyond the call for the law enforcement agencies do their job, our elected representatives need to engage in some soul-searching about their role in stirring up racism and find ways to reverse this trend. The message of discrimination against the Arab citizens of Israel, now emanating from the Knesset and the Government, must stop. A major part of this process must be conducted through the education system. Instead of adding ever more nationalist and Zionist content (with all due respect to it) to the curriculum, we need to bolster education for democracy, liberal values, tolerance, and acceptance of those who are different. Jewish students need to spend more time studying Arabic—in particular, spoken Arabic—in order to enable real ties between the two peoples. The attorney general's lenience about prosecuting rabbis for inflammatory statements that incite racism should be reassessed.

Without such a change in direction, punitive measures against extreme actions will not suffice to eliminate the phenomenon. To preserve the values of Zionism and safeguard a Jewish and democratic state, we must wage a genuine war against racism and its sources.

This article was first published in Hebrew in Haaretz on May 9, 2014.