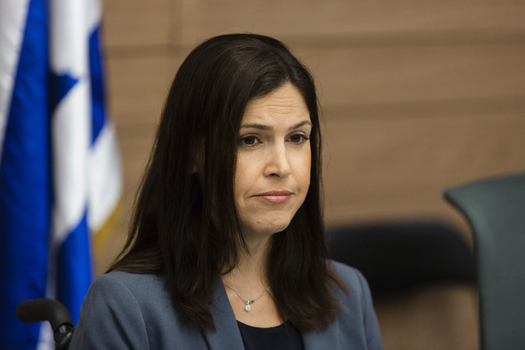 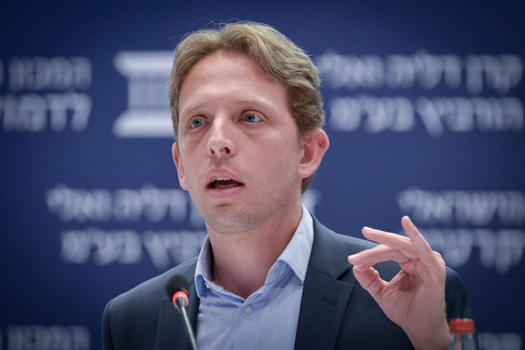 In the last year, MK Roy Folkman worked to strengthen the relationship between the Knesset and the cabinet, integrate ultra-Orthodox into a variety of fields in the workforce, remove bureaucratic roadblocks and advance pension rights.

MK Karin Elharar used a variety of parliamentary tools to advance socioeconomic issues, such as defending the rights of the handicapped and strengthening the Jewish world.

Knesset Speaker MK Yuli Edelstein: "It's time to bring the rules of the game back to the Knesset"

Plesner said that this was a very important opportunity to express appreciation to Knesset members for their exemplary parliamentary efforts, which focus not on creating loud and quickly forgotten headlines, but on professional, thorough and consistent work that brings about real changes in Israeli society. IDI's president also commented on the Knesset's current efforts to streamline private legislation and bolster government's supervisory capabilities: "This is a window of opportunity that must be embraced, by the coalition and opposition alike, in order to provide MKs with improved tools and institutional incentives to enhance their work on behalf of the public." On the subject of the pending nation-state law, Plesner said that it should be carefully examined and not passed with a simple majority. "A nation-state law that contains broad agreement could be the Knesset's gift for Israel's 70th birthday," Plesner stated.

Knesset Speaker Yoel (Yuli) Edelstein thanked the IDI staff and said that "the Outstanding Parliamentarian award proves that one can achieve, be singled out and praised without having to resort to cursing, bullying and screaming." Regarding the initiative to reform the functioning of the Knesset, Edelstein said that "we are at a crossroads in terms of reforms and we should be guided by the desire to preserve a proper balance and anticipate the implications of such changes on relations between the Knesset and government. Edelstein added that he is pained by the fact that whereas once upon a time the Knesset was guided by a set of rules, today such standards have become much more fluid, sometimes being remembered by MKs, then suddenly forgotten. "It's easy to kick with your hand, like Maradona, but we in the Knesset have a short tradition so we must always keep in mind what will happen if the other side breaks the rules."

MK Roy Folkman said: "Political activity is not like anything else, and one of the things that I'm preoccupied with as chairman is how to make ours a good faction that engages in productive activities. This is my attitude with regards to relations between the coalition and the opposition, as well as maintaining boundaries established by the rules of the game. There are many good MKs, but I am sure that in order to restore the public's trust in the Knesset, we need professionalism, agreement, civility and the rules of the game. "

MK Karin Elharar said: "I feel proud to get up every morning and work for the public, especially for those citizens whose voices are not heard. I believe in the Knesset's ability to both change people's lives and supervise the work of government. "

MK Yair Lapid, Chairman of the Yesh Atid party: "Though there are those who entered politics for the wrong reasons, most people got involved because they wanted to make the world we live in a better place and this is a task for tough people like Karin, who is tough and incredibly smart. She knows how to marshal political forces and emerge victorious from political dustups. Her toughness is enlisted in the service of the weak and those who cannot help themselves."

Minister Moshe Kahlon, Chairman of the Kulanu party: "We became the party that took it upon itself to ensure that no harm comes to Israel's democracy, the Supreme Court and the rule of law. Every day, led by MK Folkman, we combat various proposals aimed at harming particular institutions and democracy in general. Those who want to weaken the Supreme Court are powerful people that the high court interferes with, while for society's most vulnerable it is the last bastion."

This is the sixth year that the Israel Democracy Institute has given out the Outstanding Parliamentarian award. The Award Selection Committee is headed by former deputy president of the Supreme Court Justice (ret.) Theodore Or and includes Prof. Menachem Ben Sasson, Prof. Gabriella Shalev, former MK Ophir Pines-Paz, former minister Ghaleb Majadleh and Dr. Leah Nass, who conducted a series of discussions that included analyses of quantitative and qualitative data on the parliamentary activities of Knesset members, by which the winners of this year's award were determined.

Attached is the Award Selection Committee's explanation of this year's selections    (in Hebrew).

Opening remarks by the President of the Israel Democracy Institute, Yohanan Plesner

Introduction by former deputy president of the Supreme Court Justice (ret.) Theodore Or of the Chair of the State Control Committee, MK Karin Elharar (Yesh Atid) and a presentation of her activities during the 20th Knesset

Awarding of the "Parliamentary Certificate" for 2017 by the Knesset Speaker and the "Medal of the Institute" by the President of the Israel Democracy Institute to the Chair of the State Control Committee, MK Karin Elharar

Introduction by former deputy president of the Supreme Court Justice (ret.) Theodore Or of the Chair of the Special Committee to Discuss the Motion for the Agenda on Difficulties in Reforming the Civil Service, MK Roy Folkman (Kulanu), and a presentation of his activities during the 20th Knesset

Awarding of the "Parliamentary Certificate" for 2017 by the Knesset Speaker and the "Medal of the Institute" by the President of the Israel Democracy Institute to the Chair of the Special Committee to Discuss the Motion for the Agenda on Difficulties in Reforming the Civil Service, MK Roy Folkman

Speech by the Chair of the State Control Committee, MK Karin Elharar

Speech by the Chair of the Special Committee to Discuss the Motion for the Agenda on Difficulties in Reforming the Civil Service, MK Roy Folkman

Speech by the Chairman of the Kulanu party, MK Moshe Kahlon

On behalf of the Israel Democracy Institute, for the sixth year running, I am pleased to bestow the Outstanding Parliamentarian Award upon Knesset members Karin Elharhar and Roy Folkman. At IDI, We make great efforts to recognize and spotlight high-quality parliamentary service, which focuses not on the production of loud and quickly forgotten headlines, but on professional, thorough, consistent and important work. Ultimately, this is the kind of effort that contributes to real change. In the next few minutes, Justice Or will explain the Award Committee's decision, one that I completely and wholeheartedly support.

From my personal vantage point, I have seen up close MK Folkman's work with the committee to monitor the implementation of reforms in the civil service, while researchers from the Institute have supported and supplemented MK Elharar's work on the committee that led to the establishment of the Israel Broadcasting Corporation (IBC). Both cases are exemplary examples of the kind of comprehensive and sustained professionalism that benefits the entire Israeli public. I believe that the public expects such seriousness and commitment from all its elected officials. Both of these instances led to changes in the professionalism and effectiveness of public services, to the benefit of the country's citizenry.

This ethos of public service is especially important today, when we are being exposed to the problematic nature of a civil service that is weak and subject to manipulation by politicians and the powerful. While I hope that it will be proven that everyone involved in the Bezeq affair, at least from the public sector, made decisions solely based on practical considerations, this is nonetheless a clear example of the dangers inherent in certain initiatives currently being promoted: weakening the professionals and advocates who are responsible for considering only the public interest.

Mr. Chairman, presently, one of the most important reforms of recent years relating to the Knesset's work is on the parliamentary agenda. Your initiative and that of ministers Levin and Shaked, together with a group of Knesset members, will lead to a reduction in private legislation and increased Knesset oversight of the government. The proposal is based to a large extent on the in-depth research conducted by the Institute, which is of course something I'm very happy about.

It is important to lead such a structural initiative by way of dialogue and attempting to build as broad a consensus as possible in the Knesset. This is not a matter of coalition or opposition politics. Rather, this is an issue that can and should be led by way of cooperation. However, it would be a pity if we allow this window of opportunity for change to pass. Over the last year, we worked together with Knesset Caucus for Strengthening and Improving the Knesset, headed by MK Elazar Stern, and other Knesset members.  We are ready to continue to work together with you and discuss all relevant matters. Successful promotion of the proposal will in the future lead to many more MKs being able to compete for the Outstanding Parliamentarian award, since we will have provided them with the tools and institutional incentives to do their jobs.

In the meantime, the sections relating to the strengthening of the Knesset's powers vis-a-vis private parties and the possibility of holding hearings are being promoted. These are issues that must be dealt with carefully. We are currently working on developing suitable proposals, with the Knesset's advice. Yet, should this be what remains of the big push for reform, an opportunity will have been missed. It is also important to promote the heart of the proposal: reducing private legislation and strengthening the oversight capacity of the committees.

Another issue that is on the Knesset agenda these days, and one that emphasizes the importance of decisions being made with broad consensus, is the proposed nation-state law.

It is possible to steer this legislation by reaching compromises and making agreements. To a large extent, the people in this room have the power to facilitate such a process. On the other hand, it will be very bad and harmful if, instead of a law that unites, we get one that divides.

Mr. Chairman,this legislation touches on the very character of the state: Israel's identity. As such, it is not advisable to pass such a law by way of a cobbled together parliamentary majority that is formed with political deals.

This could turn out to be the Knesset's gift to mark the seventieth year of the State of Israel: a comprehensive nation-state law that confirms Israel as the nation-state of the Jewish people, while at the same time declaring the nation's commitment to full civic equality, including Israel's minority groups.

Ensuring the inclusion of the principle of equality in the nation-state law is both appropriate and necessary. The law's enactment without this component will both destroy the balance between the Jewish and democratic components of the state's identity, and deliver a serious blow to Israel's democracy! It is unnecessary and there is no reason to do it!

This is not the place to discuss all the details. But on your agenda is our proposal, written by retired Supreme Court President Justice Meir Shamgar, within the framework of discussions that dealt with drafting a "Constitution by Consensus" proposal. I suggest that you study it thoroughly, so as to promote a good and worthy proposal for the State of Israel.

Finally, I would like to thank the staff at the Institute for collecting the data for                  Avital Friedman and Shahaf Zamir.

Many thanks and congratulations to the worthy winners!

Tags:
Legislation,
Governance,
Knesset,
Members of Knesset,
Center for Governance and the Economy