In the presence of Knesset Speaker Yoel (Yuli) Edelstein

On Tuesday July 21, 2015, the Israel Democracy Institute's Outstanding Parliamentarian Award of 2014 was awarded to MK Eitan Cabel (The Zionist Union) and MK Aliza Lavie (Yesh Atid) for their exemplary parliamentary activity in 2014. The ceremony took place in the office of the Speaker of the Knesset.

The award was presented in the presence of Knesset Speaker MK Yuli Edelstein, IDI President Yohanan Plesner, Opposition Leader MK Isaac Herzog, and MK Yair Lapid, Chairman of Yesh Atid, as well as the members of the selection committee headed by former Deputy President of the Israeli Supreme Court Justice Theodor Or. 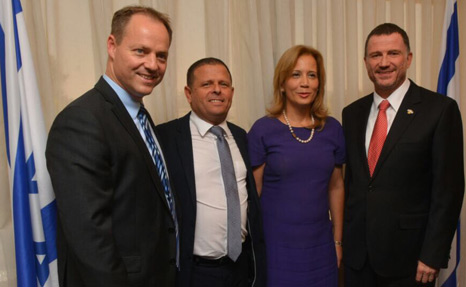 From the Selection Committee's statement on Eitan Cabel: "MK Eitan Cabel worked vigorously and stood out for his work in the Knesset plenary, his legislative activity, and his involvement in Knesset lobbies. Among other things, he promoted legislation in a wide range of areas, such as consumer protection and prevention of cruelty to animals, and he even served as the Chairman of the Labor faction until recently. MK Cable also distinguished himself by his plenary speeches, queries, and use of the Knesset's Research and Information Center."

From the Selection Committee's statement on Aliza Lavie: "From the start of her term as a member of Knesset, MK Lavie worked tirelessly to advance the status of women and to promote gender equality, as the Chair of the Committee on the Status of Women and Gender Equality in the 19th Knesset. She also distinguished herself by the legislation that she advanced, especially in the area of prevention of sexual harassment, her plenary speeches, and her use of the Knesset's Research and Information Center."

MK Cabel and MK Lavie were chosen from among nine finalists who had been shortlisted for the prestigious award based on a variety of measures of their Knesset performance. The two MKs were recognized for their work in the 19th Knesset, but the award ceremony was postponed when early elections were called.