Participation is by invitation only. 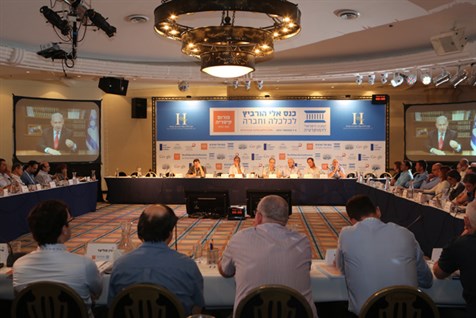 On November 6–7, 2013, IDI convened the second Eli Hurvitz Conference on Economy and Society. Formerly known as the Caesarea Economic Policy Planning Forum, the conference fosters open discussion between senior government decision-makers and leading figures in academia, the non-profit sector, and the business world. This event was broadcast live on the IDI website with simultaneous English translation of the plenary sessions.

This conference is made possible by the generosity of
The Dalia and Eli Hurvitz Foundation.

The Eli Hurvitz Conference on Economy and Society (formerly the Caesarea Economic Policy Planning Forum), which convened in 2013 for the 21st time, has established a unique tradition of professional, responsible, in-depth, and impartial discussion of the core issues in Israeli economic life. The annual conference is the culmination of comprehensive work conducted over a period of months by a federation of the leading research institutes in Israel. This work includes meetings of heterogeneous teams of experts, sessions with decision makers, intensive research, and the formulation of conclusions and recommendations that are distributed to policy makers and conference participants prior to the conference.

The conference brought together government ministers, public officials, senior bank executives, the top echelon of the Ministry of Finance and the Health Ministry, ministers and Knesset members, members of academia, chairs of public committees, leading figures in the business sector (chairs and CEOs of corporations, conglomerates, and associations), journalists, and guests from abroad, who attended  plenary sessions, workshops, formal meetings, and informal meetings and rolled up their sleeves to make an impact on the economic and social fortitude of the State of Israel.

Three main principles guided the work of the working groups prior to the conference and the planning of the conference itself.  The first and most important was to strengthen the impact of the output of the conference on decision makers in Israel by having the research teams closely study the selected issues and submit reports designed to benefit decision makers in their daily work. The second principle was a decision to examine each of the core issues studied—education, health, innovation, civil service, and employment and productivity—over a period of five years, with the aim of generating output that reflects comprehensive and long-term thinking. The third principle is the goal to innovate, since the uniqueness of the working groups is their ability to mobilize professional and experienced forces and make recommendations that are innovative from the perspective of decision makers. The conference itself offered an additional opportunity to emphasize and reinforce these three principles through plenary sessions and workshops in which decision makers of various echelons themselves participated.

The 2013 conference concentrated on five subjects:

It may be noted that Education Minister Rabbi Shay Piron and Minister of Intelligence Dr. Yuval Steinitz were not able to attend the conference.

Note: For workshop participants please see the Workshop Supplement in the Full Program.

Toward a New Paradigm in Israeli Education (Full Report)

Inequality: It's Bad for our Health (Full Report)

When the Start Up Nation Matures (Abstract)

Download the full book of conference materials for the 2013 conference.

Highlights of the 2013 conference included:

International figures who addressed the plenum in English included:

In addition, Prof. Moran Cerf, a Professor of Neuroscience from the Department of Neurosurgery at NYU and UCLA and the Kellogg School of Management presented a lunchtime lecture.

The Governor of the Bank of Israel's Video Address

All plenary sessions of the 2013 Eli Hurvitz Conference on Economy and Society are available for viewing on demand with simultaneous English audio translation.