How do Israelis assess the government's ability to deal with challenges? Do they have confidence in their elected officials? On Sunday October 6, 2013 at 10:30 a.m., IDI President Dr. Arye Carmon presented the 2013 Israeli Democracy Index to President Shimon Peres at a ceremony at the President's Residence.

Headed by Prof. Tamar Hermann, Director of IDI's Guttman Center for Surveys, the annual Israeli Democracy Index has been the leading barometer of perceptions of the quality of Israeli democracy since its first publication in 2003. Based on an extensive survey of a representative sample of the adult population in all sectors of Israeli society, the report provides critical insights regarding trends in public opinion regarding the preferred form of government, the functioning of the political system, the behavior and performance of elected officials, and the realization of key democratic values. Analysis of its results may contribute to public discussion of the status of democracy in Israel and create a cumulative empirical database to intensify discourse concerning such issues.

In 2013, as in previous years, the Israeli Democracy Index seeks to examine the institutional, procedural, and perceptual aspects of Israeli democracy. The purpose of the report is to provide a comprehensive, up-to-date portrait, and at the same time identify trends of change and elements of stability in Israeli public opinion in the political and socioeconomic spheres. Readers should bear in mind, however, that the survey on which the Index is based measures the feelings, opinions, and judgments of the general public, meaning that this is not an "objective" or professional assessment of Israel's situation. Inevitably, the public sees things in a way that may prove in future, or even at present (in the opinion of experts), to be inaccurate or imprecise. Nevertheless, perceptions, attitudes, and emotions play a major role in the public's behavior (including its electoral preferences), making it eminently justifiable in our view to invest effort and resources in exploring them.

The Israeli Democracy Index 2013 is divided into five chapters:

The questionnaire for the 2013 survey was developed in February–March 2013, and data were collected by the Dialog Institute via telephone interviews between April 8 and May 2, 2013. The questionnaire was translated Russian and Arabic, and the interviewers who administered these versions were native speakers of these languages. A total of 146 respondents were interviewed in Arabic, and 102  in Russian. The survey included 200 cellular phone users, primarily to offset the difficulty of obtaining responses from young people using a landline.

The study population was a representative national sample of 1,000 adults aged 18 and over (852 Jews and 148 Arabs). The sampling error for a sample of this size is ±3.2%. The survey data were weighted by sex and age.

How Does Israel Compare with Other Countries?

The 2013 Israeli Democracy Index points to a number of interesting trends in Israeli public opinion on issues related to Israeli democracy: 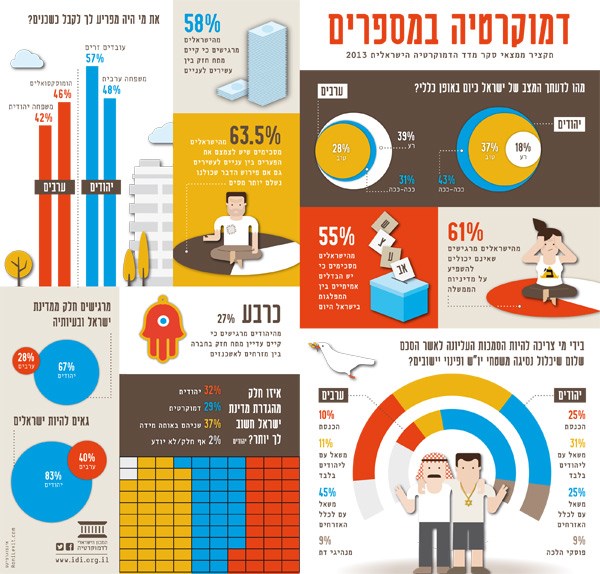