During the 1967 Six-Day War, the State of Israel conquered territory that tripled its size. Though Israel later ceded the clear majority of that territory in the context of a peace agreement with Egypt, the war changed the contours of Israeli politics and opened an ideological rift that has been at its core ever since. Today, advocates of "Greater Israel" see continued control of the territories in Judea and Samaria, and the strengthening of Jewish settlement there, as an expression of the Jewish people’s historical right to the Land of Israel and as a vital security necessity. Those who favor withdrawal from Judea and Samaria believe territorial compromise is a prerequisite for peace and that perpetuation of the current situation, in which residents of the same area do not enjoy equal rights, casts a heavy cloud over Israel's democratic future.

The first survey was done by handing out surveys at organized events in several key Israeli cities, including Tel Aviv, Ramat Gan, Ramle and Jerusalem. The second, third and fourth surveys were done via face-to-face interviews of 2,000 people in Jerusalem, Tel Aviv, Haifa and Beersheba, as well as a few smaller cities.

The results of the surveys were originally provided to the government for its information and use.

The feeling among the public:

Survey 2: On the eve of the war and during the war — June 5, 1967, as part of the reports submitted to the Prime Minister’s Office:

Survey 3: June 11–16, as part of the reports submitted to the Prime Minister’s Office

Holding on to the territories that had been conquered:

Trust in the government:

The Arabs living in the territories, after Israel won the war:

A comparison between the three surveys: During the war, one week afterward, and two weeks afterward:

Relations between Mizrahi and Ashkenazi Jews:

The majority thought that there would be fewer problems between the religious and non-religious because of the war.

Who are Israel’s friends?

If the news says one thing and people say something else, whom will you usually believe?

The attitude of Israelis toward Arabs in the territories that were won by Israel during the war:

Visits to the territories:

The mood and the concerns: 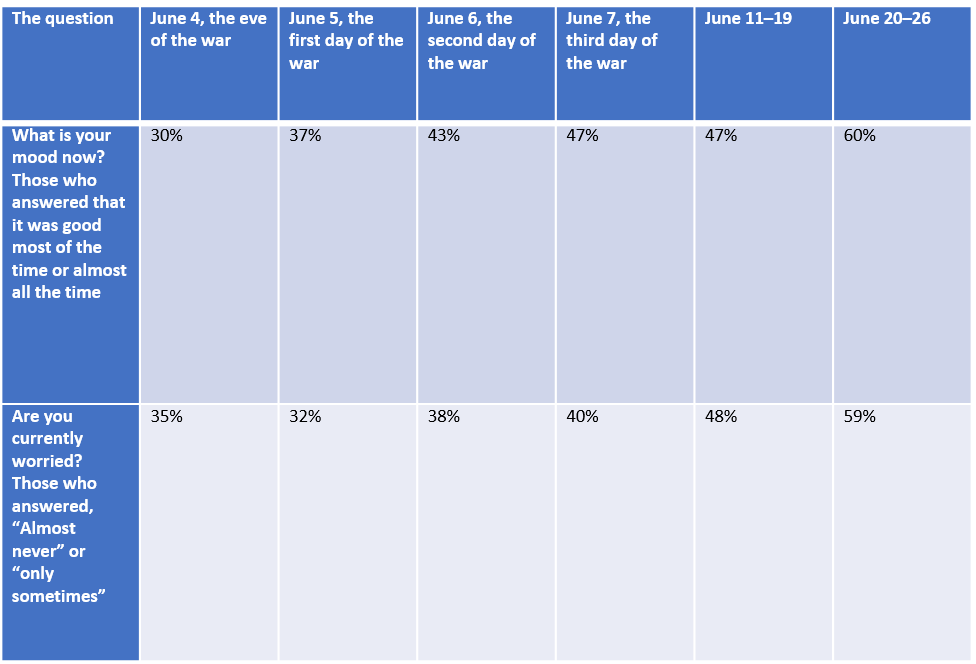