As Israel approaches the festival of Shavuot, which commemorates Ruth's decision to join the Jewish people, IDI has joined a new forum established to promote conversion in Israel.

A play on tzav giyus, Hebrew for "draft notice," Tzav Giyur (literally: "conversion order") has been established to advance dramatic reforms that will address the crisis of conversion in Israel. Guided by the conviction that it is both necessary and possible to broaden the scope of conversion according to Jewish law in a manner that is welcoming and accepting, this coalition of Zionist organizations will promote legislation, encourage educational programs and preparatory programs for conversion, provide emotional support for converts within the community, increase public awareness of the need to resolve the issue of conversion, and work toward cultivating a welcoming approach to conversion in Israel. 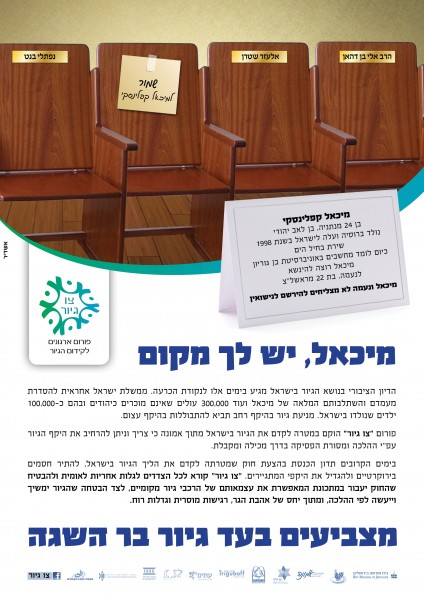 Tzav Giyur is currently promoting legislation that will authorize independent local rabbinical conversion courts to perform conversions that will be recognized by the State of Israel. In a full page ad in the Hebrew press, the coalition depicted a Knesset seat alongside that of Minister Naftali Bennett, MK Elazar Stern, and MK Rabbi Eli Ben Dahan reserved for "Mikhail Kaplinsky," a prototypical 24-year old born to a Jewish father and non-Jewish mother in the former Soviet Union who made aliyah with his family at the age of two. Following his service in the Israeli Navy, Mikhail is studying computers at Ben Gurion University and is engaged to Naama, a nice Jewish girl from Rishon LeZion. They have not been able to register for marriage, however, because Mikhail is not recognized as being Jewish.

The advertisement, which has IDI as one of its signatories, opens by assuring Mikhael that there is a place for him. It alerts the public to the fact that in the coming days, the Knesset will debate a bill that is designed to promote conversion, clear bureaucratic obstacles, and broaden the scope of conversion in Israel. It warns that the Israeli government is responsible for regulating the status and full integration of some 300,000 immigrants who are not recognized as Jewish, including 100,000 children who were born in Israel; if conversion of the masses is not made possible, the result will be widespread assimilation.

The ad calls on all sides to "demonstrate national responsibility and ensure that the legislation passes in a format that will allow local conversion courts to act in an autonomous manner, while ensuring that conversions will continue to be conducted in accordance with Jewish law and will be informed by love of the stranger, moral sensitivity, and greatness of spirit."

In closing, the ad appeals to the members of Israel's Knesset to vote for "achievable conversion" (giyur bar hasaga, a play on the Hebrew diyur bar hasaga slogan calling for "affordable housing").

Members of the Coalition: