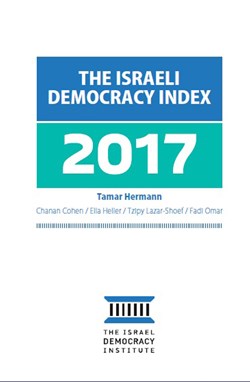 The Israeli Democracy Index is a public opinion poll project conducted by the Guttman Center for Public Opinion and Policy Research.

In this report, as in our recently published report on Jewish-Arab relations in Israel in 2017, we
make no attempt to “grade” the overall level of democracy in Israel; in our view, this is a form
of academic hubris that has no place in such a complex situation.

In certain areas, Israeli society
demonstrates a strong grasp of democratic principles, while in others, serious shortcomings are
evident. What is clear is that this year as well, relations between the government and citizens
are very troubling.

The public has a poor overall opinion of the political system’s performance,
and believes that the motives of elected representatives fall far short of the standards expected
of governments whose purpose is to reflect and promote the common good.

In Part I of the report, we present data from external sources in the form of scores in democracy
indicators compiled by international institutes such as the World Bank, Freedom House, and the
Economist Intelligence Unit.

Part II is based on a public opinion survey.