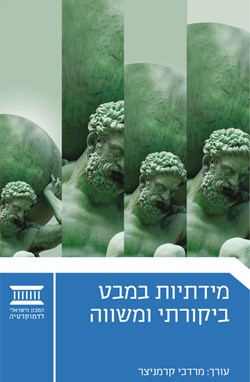 Proportionality: A Critical and Comparative Perspective

Only a very few constitutional petitions are rejected because they fail to meet the basic criteria of infringement of a right, or the government action in question having a worthy objective. This being the case, and not only in Israel, it is proportionality that becomes the key factor in determining the constitutionality of the action. Hence the study of proportionality is of tremendous importance.

This book, and its exploration of proportionality, is divided into two parts. The first, of which I am the author, contains a critical examination of proportionality in Israeli law in terms of its suitability for use in the decision-making process, in contrast with its use in judicial review of decisions that have already been made. The second part of the book presents comprehensive surveys of proportionality in three leading legal systems, from a constitutional perspective. Dr. Michal Kramer studied the German legal system, Atty. Michele Nagar examined the Canadian legal system, and Atty. Roey Sasson investigated the South African legal system. The research was performed in 2012‒2013. Occasionally, comparative references to other legal systems are made during discussions of various Israeli legal issues, often only in a cursory fashion. There is therefore much to be gained from a full and systematic study of the legal situation in other systems.

Our comparative investigation produces a complex picture. The German system, we learn, is similar to the Israeli system in terms of the emphasis it places on the third test for proportionality, which assesses proportionality in the narrowest sense. This test is used by the court to evaluate whether the benefit expected from the objective of a particular action exceeds the damage done by the action’s infringement of rights. In South Africa, proportionality tests are used, but there is no specific order in which they must be applied, and there is no requirement that the examined action pass the first tests before moving on to subsequent tests. In Canada, the main constitutional analysis work is done using the second test—the necessity test, which seeks to ensure that the means deployed are the least harmful to rights— rather than the third (narrow proportionality) test.

In looking at proportionality in Germany, two fundamental differences should be noted between the German legal system and its Israeli counterpart. First, there is the legal difference: in the German system, the right to human dignity enjoys the special status of an absolute right; this has no parallel in Israeli law, in which the right to dignity is a relative right. Second, there is the political-cultural difference, which is reflected in the special and unique legitimacy enjoyed by the constitutional court in Germany. This legitimacy was conferred upon the court primarily because of the colossal failure of politics under the Weimar regime, which resulted in the rise of the Nazi party, the Second World War, and the Holocaust. In this, too, the Israeli system is different. Furthermore, after our research into German law had been completed, another study was published which found that during the years 1951-1977, the German Constitutional Court rarely used the third proportionality test as grounds for striking down a statute. During the period from 1979 to 2012 the situation changed, and the reliance on the third test increased. Yet even then, only one-third of the disqualifications of government actions were based on the third test for proportionality.Niels Petersen,Verhältnismäsigkeit als Rationalitätskontrolle 136, 137 (2015).

A critical examination reveals that the accepted view of the Israeli system is incorrect. It is commonly believed that the first two tests for proportionality—the suitability or efficiency test, which examines whether the means being used are capable of achieving the desired objective; and the necessity test—are easily satisfied, and are almost pro-forma tests. Thus, all the importance shifts to the third test for proportionality—the narrow proportionality test. According to this view of the system, there is a clear and sharp distinction to be made between the first two tests, which are factual-empirical tests, and the third test, which is a normative, values-based test.

However, an analysis of Israeli law reveals a more complex picture. I will note here just a few of its characteristics.

It appears that Israeli law (but not only Israeli law) establishes a clear link between the tests for proportionality and the issue of worthy objectives. A failure to satisfy the tests can be an indication that the objective being claimed is not the true purpose behind the government action under review. Even the first proportionality test raises questions about values, for two reasons: Firstly, because of the relation between the required level of suitability of the means being used and the importance of the right that has been infringed; and secondly, because of the view that the suitability of the means depends not only on their potential for achieving the objective, but also on their being means appropriate for use in a state governed by the Rule of Law. The manner in which the second test is applied is also subject to the question of which interests are to be weighed against one another. A critical analysis carried out during application of the first and second proportionality tests—even if the means do not fail the tests, but scrape through with a “pass”—can provide an early indicator that the means will fail the holistic part of the analysis, that is, the third test for proportionality. When the first and second tests are initially used only as threshold tests, the analysis involved in applying the third test requires that the first tests be repeated, this time as substantive tests entailing a rigorous examination.

The case law indicates that (as might also be expected) a court will first and foremost concentrate on deciding the legal question placed before it from the perspective of a judicial review of decisions made by other parties, who were authorized to do so. The court is not interested in instructing the decision makers in how they ought to act when they consider infringing upon a right for the purpose of achieving a worthy objective.

It is highly doubtful that decision makers ought themselves to act in the same way the court does. Their very different role—setting policy (as opposed to reviewing decisions that have already been reached)—as well as their abilities and tendencies (which are different from those of the judges) invite a different approach. From the perspective of decision makers, it would seem that it is the first and second tests that need to be given real content. The first test requires a preliminary dismissal of means that violate international law or the basic tenets of human morality. In this context, it is worthwhile examining not only the benefit to be expected from using the means in question to advance the objective, and the probability of this benefit coming to pass, but also the additional harms that may be caused by using these means, taking into consideration the probability that these harms will actually be inflicted. In the second test, a full and honest examination of various alternatives is required.

Perhaps the biggest challenge that we face in this area is providing an incentive for government authorities to consider possible alternatives seriously, right at the start of the policy-making process. The court should take care not to transform the second test into an incentive to choose the most drastic and harmful means on the grounds that they are more effective than other, less harmful means. Respect for human rights demands precisely the opposite. In other words, respect for human rights requires that we first examine means that least infringe rights before moving on to consider more extreme measures. Rejecting the more moderate means, and choosing a more harmful alternative, can be considered only once the situation has been properly analyzed, and the conclusion reached that the less harmful measure is insufficiently effective. If, at this stage, the more harmful alternative is preferred, it will most likely be the alternative chosen at the end of the entire process.

And yet the choice of a less harmful alternative is not the end of the story. It is also necessary to carefully examine the suitability (the exact fit) of the chosen alternative for achieving the stated objective, that is, the marginal gain that it contributes towards this end. In this context, the means need to be carefully tailored so that they do not go beyond what is necessary, and do not cause excessive harm to any of those affected. It must also be accompanied by the procedural guarantees that are required in a Rule of Law state. The importance of this kind of careful design, especially given the danger of measures that are too sweeping, is also a conclusion reached by this comparative study. The study also indicates that special care needs to be taken with regard to vulnerable population groups.

This book is but the first step in a longer journey. During this study, a research proposal was developed, together with Dr. Raanan Sulitzeanu-Kenan. The proposal was submitted to the European Research Council and a research grant was awarded. Work on the issue of proportionality at the decision-making level is forging ahead in this framework. This book, and the insights derived from it, should therefore be viewed as a tentative waystation on the road to further, and possibly different, conclusions.