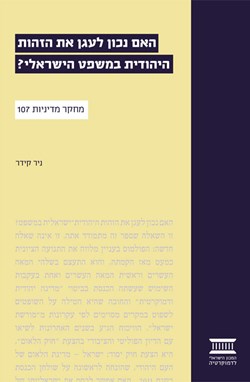 Should Jewish Identity be Anchored in Israeli Law?

Should Jewish-Israeli identity be anchored in legislation? This volume argues that Israeli identity and culture do not need formal legal declarations, and warns that anchoring Israel's Jewish and democratic identity in law could fan the flames of the culture war surrounding the issue of Jewish identity and endanger Israeli society.

Should Jewish-Israeli identity be anchored in legislation? This question, which is at the heart of this volume by Prof. Nir Kedar, is far from new. The controversy surrounding it has accompanied the Zionist movement almost since its inception, intensifying in the late 20th and early 21st centuries as a result of the way in which the Knesset used the phrase “Jewish and democratic state,” and its demand that judges rely on principles of Jewish tradition (moreshet yisrael), when deciding certain cases. This debate reached a new peak in the political and public discourse surrounding the proposed Basic Law: Israel as the Nation-State of the Jewish People, which was first submitted to the Knesset in 2011.

Is it possible to base the "Israeliness" of Israeli law on “Jewish-Hebrew-Israeli” content? Is it possible to anchor the country’s Jewish identity by means of legal texts such as the proposed Basic Law? This volume argues that Israeli identity and culture do not need formal legal declarations. On the other hand, however, “declarations of identity,” such as the proposed Basic Law, which anchor Israeli identity and culture in law, would endanger Israeli society because they would fan the flames of the culture wars surrounding the issue of Israeli identity, and generate an artificial tension between “authentic” Jews and “modern-day Hellenizers,” who ostensibly prefer universal values such as citizenship and democracy over Jewish values.

This publication was made possible by the generous support of the Goldhirsh Foundation.

This policy study was published as part of IDI's Nation State research project, which was headed by Prof. Anita Shapira.

Prof. Nir Kedar is the Dean of the Sapir College School of Law and a lecturer in law and legal history at Bar-Ilan University. His main fields of interest are the history of law, comparative law, Israeli history, and legal and political theory. At the time of the writing of this book, he was a researcher at the Israel Democracy Institute.

Tags:
nation state of the Jewish people,
The Nation-State,
The Joan and Irwin Jacobs Center for Shared Society