Rosh Hashanah, the Jewish New Year, is an opportunity to stop and ponder how much we love to forget or forget to love. This article was originally published by the Jewish Journal. 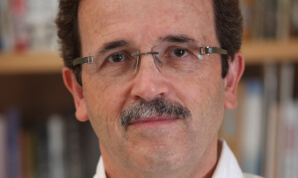 Rosh Hashanah, the Jewish New Year, is an opportunity to stop and ponder how much we love to forget or forget to love. The season enables us to temporarily sever contact with the daily grind that's characterized by its sudden jerking from idle to full speed. During Rosh Hashanah, our existential state shifts, liberating us from our enslavement to the here and now, and allowing us to gain a wider perspective on our lives by not fixating on its details.

This break from reality isn't only critical to the individual, but to a nation's well-being.

Holiday prayers remind us of our inherent vulnerability: "…Which nations will live by the sword and which nations by peace, which will go hungry and which will be sated” (Rosh Hashanah liturgy). This verse drives home the random, transient and fragile nature of the supreme organizing institution of the Jewish People: Israel. As such, this year's shofar blasts must awaken within each of us the desire to evaluate the state of affairs in Israel and our connection to it.

During the first few decades of Israel as the sovereign Jewish state, we were primarily in survival mode. We lived our lives in a permanent state of siege, exemplified by continuous threats to "throw us into the sea." As a result, the nation marshalled its forces, united and succeeded in confronting these existential challenges.

In subsequent decades, once Israel's security situation stabilized and its continued existence was secured, we reverted to more “normal” behavior and to every citizen becoming increasingly focused on his/her personal and sectorial needs. Across the country, the feeling that revolutionary Zionism had exhausted itself began to pervade. For many Israelis, the individual and/or the “tribe” became their new center – not the state. The result is that societal, ideological, and identity-based tensions developed and have come to define the Israeli public.

In recent years, this trend has entered a dangerous new stage: we are neglecting what must be our basic and instinctual understanding that social cohesion and devotion to the state are necessary, even crucial, conditions for our survival. Sadly, Israeli democracy is limping along, from crisis to crisis, and we are not internalizing the need to rekindle the ever-diminishing flame of national unity.

Israel today is being attacked from different directions: individual rights are obsessed over by the ruling liberal narrative at the expense of the broader national interest. Israeli politics revolves around different population groups, each one with its own special interests and areas of concern. Simultaneously, presumptive guardians of wider, national interests are simply ignored.

This creeping individualization of our society is also echoed by the state itself. The Israeli government has washed its hands of large parts of its basic responsibility for such classic public goods as education and health.

Increasingly, such services are being transferred into private hands.

These and other attacks on the collective good are effectively castrating our natural inclinations towards patriotism, which has historically proven to be a crucial component in Israel's national security.

Israeli society has upset the delicate balance between individual, group and state. The pursuit of personal material gain, growing tensions fueled by an increasingly balkanized society, and growing economic alienation might ultimately combine to form a perfect storm that will make Israel dangerously vulnerable. The signs are already there in the public's overwhelming disapproval of Israel's political system, the lack of faith that many Israelis have in the judiciary, the difficulty of the government to fulfill its mandate to govern, and lately, the growing criticism of the heads of the IDF, fueled by rivals on both sides of the ongoing cultural war.

And so this Rosh Hashanah we must renew our solemn pledge to our country, Israel. To do so, we should begin by remembering that the state is the most effective way for us to cope with much of the uncertainty in our lives.

This article was originally published by the Jewish Journal.