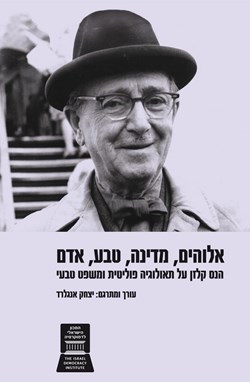 This book contains three articles that present a psychoanalytic and philosophical study of the surprising parallel between the question of relations between state and law in political theory, and between God and the world in theology. A comprehensive foreword by the translator offers further insights into the thought of Hans Kelsen.

God, State, Nature, Human introduces the Hebrew reader to two topics of current interest related to the philosophy of law and political science - political theology and the place of natural law in the law of the state - as they appear in the writings of Hans Kelsen (1881-1973), considered by many to have been the greatest jurist of the twentieth century.

An influential figure in matters of juridical and political thought, Kelsen was a professor of law and a member of the Constitutional Court of Austria, who began his professional career as a lecturer at the University of Vienna and later transferred to the University of Cologne, Germany. When the Nazis rose to power, Kelsen was expelled from the university due to some of his controversial views and his Jewish origins. He moved to Switzerland and remained there until the outbreak of the Second World War, when he immigrated to the United States and served as a professor of law at the University of California, Berkeley.

This book, which was edited and translated by Professor Izhak Englard, former justice of the Israeli Supreme Court and recipient of the 1997 Israel Prize for the Study of Law, consists of three parts:

In the selections in this volume, Kelsen points to the interesting parallelism between the theological solution to the question of the essence of God, God's relationship to the world, and God's relationship to the laws of nature, and the legal solution to questions concerning the essence of the state and its relationship to the legal system. Thus, the theological concept of the miracle, which is based on God's freedom from the laws of nature, is analogous to the legal miracle, which is based on the state's detachment from the law and ability to act outside the legal system. Kelsen, who was highly critical of the idea of natural law, describes the practical and theoretical weaknesses of this idea. His brilliant and in-depth analysis borrows from the insights of Sigmund Freud, showing the close connection between man's personality and worldview.

This book brings the Israeli reader the ideas of Hans Kelsen-considered by many the greatest jurist of the twentieth century-on two topics of immense interest and actuality: political theology and natural law.

Regarding political theology, the author provides an in-depth analysis of the surprising parallelism between the answers to the question of God's relationship to the world, the laws of nature, and the individual given by theologians, and the answers offered by jurists to the question of the relationship between the state and its legal system and its citizens. In Kelsen's view, these answers, based on the idea of duality, cannot withstand a theoretical critique. The transcendence of Divinity towards the world and the supralegal nature of the state encounter the cognitive problem of systematic unity. The idea that God subjects Himself to the laws of nature created by Him, and correspondingly, the state to its own laws, results ultimately in the common concept of "miracle": Divinity may deviate from the laws of nature, the state from its laws in case of necessity (raison d'état, act of state). To the contrary, Kelsen thinks that God is inherent in nature (pantheism), and correspondingly, the state is identical with its legal system. Kelsen's analysis is influenced by the psychoanalytic teachings of Sigmund Freud.

The second topic discussed in this book relates to the philosophical foundations of the theory of natural law and legal positivism. Kelsen claims that there is no logical possibility of a contemporaneous normative validity of positive law and natural law. In a fascinating chapter, the author analyzes the psychology of the different approaches towards the real, the natural, and the normative. Man has a tendency to double the object of cognition: he creates a duality of this world and the world to come, of experience and transcendence. Concerning the human attitude towards the real and the metaphysical, Kelsen distinguishes between three types of people: the pessimist who rejects the real world, the optimist who favors it, and the person attempting to reconcile the two.

In a comprehensive introductory chapter, Prof. Englard describes the author's background, the content of the book, and the major criticisms voiced against Kelsen's views.