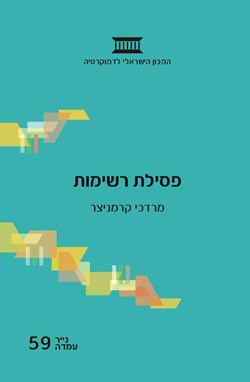 The right to vote and to be voted for are central tenants of democracy. How is it possible to balance between the right to be voted into parliament and society’s right to protect itself from existing and potential dangers? This paper investigates the development of Israeli law on disqualifying party lists in general elections, and makes recommendations for change and improvement.

The subject of this position paper is the disqualification of lists and of candidates who seek to be elected in a democratic process. The grounds given for such disqualification are anchored on value-based positions held by these lists and candidates which endanger the existence of the state or its fundamental values. This is a constitutional issue of the highest degree of importance; at its core is a frontal conflict between democratic values and political freedoms – a conflict between the right to vote and to be elected, versus the right of a society to protect itself against existential and other threats.

This paper presents the principal constitutional questions regarding the issue of the disqualification of lists, together with a discussion of the existing law and the desirable law. Beginning with the Neiman I case (1984) and continuing through its decision in the Bishara case (2003), the Court has been taking a restrictive approach regarding the disqualification of lists, while focusing on the core characteristics of each ground for disqualification. The Court has held that intentions of a political character that are purely theoretical are insufficient for disqualification. To be disqualified, the candidates’ list must repeatadly be seen to work towards the realization of its goals the strength of which are given serious and extremist expression. The evidence of the constitutional purposes must be clear, persuasive and unequivocal.

Nevertheless, the Court has not demonstrated consistency or decisiveness in its restrictive approach towards disqualifications. The Court refrained from applying a test of actual risk (of the list achieving its purposes); several of the judges in the Bishara case were satisfied with examining the purposes of his list and they gave the term “actions” a very broad definition; several of the judges did not examine each ground for disqualification separately but combined the various grounds in a manner that left unclear the question of whether the required standard of proof had been met regarding each individual ground. Most of the judges saw nothing wrong with relying on secret evidence presented in camera.

A comparison to other legal systems shows that in the older democracies, which are well-established and self-confident, there is generally no concept of value-based disqualifications, either of candidates or of political parties. There are such disqualifications, however, in relatively young democracies that have experienced a period of authoritarian rule. A common denominator among those countries is the type of grounds for disqualification – these include threats to the adoption of a platform seeking to inflict damage on the state’s existence, or support for the use of violence, and for damage to the democratic nature of the regime. There is no analogy in these countries to the aspect of Israeli law which allows for disqualification based on opposition to the country’s Jewish character.

The position of the European Court of Human Rights is that public debate of political goals is inherent in the nature of democracy, even if these goals are disputed and even if the debated goals challenge the structure and character of the existing state; the goals which may be debated include a recognition of a national minority which is entitled to selfdetermination and to carry on a struggle to achieve it. A call for fundamental change in the nature of the state cannot be considered a ground for disqualification from the political process, as long as the means are legal and democratic, and provided that the goals that a party wishes to promote are consistent with basic democracy.

Disqualification should only be implemented in extreme cases, because it inflicts damage on the democratic process and on the totality of the candidates’ rights.

We believe that the disqualification of candidates’ lists is justified only when it protects against danger to the state or the democratic regime or against racism. The ground for disqualification based on the negation of Israel’s existence as a Jewish state should be removed, since it is inconsistent with the democratic nature of the state, inhibits free discussion regarding the question of the identity of the State of Israel and can offend Israel’s Arab citizens. So long as this ground remains in place, a list should be disqualified only if there is a real possibility that the threat to the Jewish nature of the state could be realized. This condition should be applied also in the framework of disqualification concerning the existence of the state as a democracy. Only a racist party platform or one that negates the state’s right to exist would justify disqualification by virtue of its platform and activities, without any additional test of likelihood.

Finally, the ground for disqualification based on support for armed struggle by a terrorist organization or a hostile state should be deleted, because of the difficulties involved in defining the terms “terrorist organization” and “support” and because this ground for disqualification is already covered by the ground related to endangerment of the state.

The power to disqualify should not be in the hands of a political body, and it is fitting that this power be in the hands of a judicial body. However, so long as the power is held by the Central Elections Committee, the Court’s supervisory power must be broad, so as to enable a substantive examination of the Committee’s decisions. The Court itself must retain its restrictive approach to grounds for disqualification, and ratify disqualification only in extreme cases. It should also refrain from hostile rhetoric towards any list or candidate which has not been disqualified.