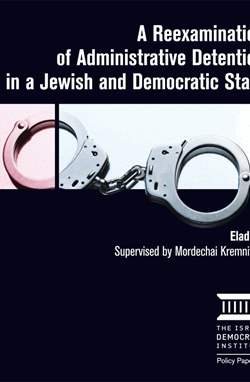 A Reexamination of Administrative Detention in a Jewish and Democratic State

The events of the last decade show that the struggle of a democratic state against terror is a particularly daunting challenge. A democracy must contend with a force that can inflict harm on thousands in a single blow while terrifying millions more. At the same time, it must continue to uphold basic human rights, which are the moral justification of its existence. The young Israeli democracy has always been at the forefront of this struggle and is therefore a case-study from which much can be learned.

One of the harshest measures adopted by Israel in its attempts to foil terror within its borders is administrative detention, which grants the government the authority to detain a person without trial for a prolonged period in order to prevent danger to state security. The morality and legality of this measure are at the heart of public debate, since it severely violates the most basic human rights.

Written by Attorney Elad Gil, under the supervision of Prof. Mordechai Kremnitzer, A Reexamination of Administrative Detention in a Jewish and Democratic State addresses the most difficult questions concerning administrative detention that trouble democracies in the world today. Is it justifiable to detain a suspect for preventative reasons? How can one assure the suspect of due process while simultaneously maintaining the security of intelligence sources and preserving their immunity from prosecution? What is the correct balance between the duty to protect the public and the duty to protect the individual's freedom, dignity, and fundamental rights to due process?

This policy paper, which is an excerpt of the Hebrew book Exceptional Measures in the Struggle Against Terrorism, concludes with recommendations for comprehensive changes to Israeli law and the adoption of a proportionate legal arrangement that would befit the constitutional regime of Israeli democracy while fulfilling Israel's obligations towards International Law.

Adv. Elad Gil is a graduate of the Faculty of Law at the Hebrew University of Jerusalem and is a researcher at the Israel Democracy Institute.

Prof. Mordechai Kremnitzer is Vice President of Research at the Israel Democracy Institute and Professor Emeritus of Law at the Hebrew University of Jerusalem.

The Emergency Powers (Detention) Act – 1979 (hereinafter: the Detention Act) grants the minister of defense the authority to detain an individual without trial in order to protect state security and public safety. A detention order may be issued for periods of up to six months, and consecutive orders make it possible to incarcerate a person for many years (theoretically, for an indefinite period) without having been convicted of a criminal act.

Despite its worthwhile objective, the act severely infringes the basic tenets of reasonable judicial process as it enables the state to deprive individuals of their freedom and dignity by removing all the guarantees of a fair trial that are recognized under criminal law. In its present form, the act does not allow prisoners to know the reasons that led to their detention. Moreover, it does not allow them to defend themselves properly. In most cases, the evidence that leads to detention orders is kept hidden from the suspects and from their lawyers, and the proceedings are far more reminiscent of Kafka than of a trial taking place in a Jewish and democratic state.

The current legal arrangement is actually the legacy of security regulations that were established by the British authorities at the end of the Mandate period, which were directed, first and foremost, against the Yishuv (pre-State Jewish community). These provisions symbolized the arbitrary attitude of a cold, remote regime toward the residents of an occupied country and the glaring injustice inflicted on them, which only fanned the flames of Jewish resistance to the Mandatory regime in the Land of Israel. The Detention Act was submitted to the Knesset in 1979 by then-Justice Minister Shmuel Tamir thirty-one years after he and forty-nine other underground fighters had been exiled to Kenya under these same regulations. The act sought to temper the rigidity of the Mandatory security regulations and to dispel any doubts about the perversion of justice, which they had created. However, the act retained essential provisions that are unacceptable and that deviate from Israel’s obligations under international law. As a result, and without delving into this issue, for about thirty years, there has been a legal arrangement in the statute book that rends the fabric of the fundamental principles of law and society in Israel, and erodes our international standing as a democratic, law-abiding state.

No one would dispute the fact that the State of Israel has been grappling for years with a tangible and plaguing threat of terrorism, which has taken the lives of numerous Israelis and has severely disrupted our way of life. Nonetheless, we must bear in mind that the best way to confront the gamut of terrorism offenses inside Israel’s borders – from membership in a terrorist organization to murder – is within the framework of criminal law. It is necessary to emphasize that the Detention Act applies only to the State of Israel proper, and is not a basis of authority for carrying out administrative detentions in Judea and Samaria. Administrative detention is a “stepchild” that is intended to prevent potential dangers to state security from materializing, only when it is impossible to do so under criminal law.

In the opening chapters of this work, I chose to analyze the key provisions of the act, questioning its capacity, in its present form, to achieve the security objective that it seeks to promote due to its many shortcomings: The mechanism of administrative detention, as authorized by the Detention Act, is liable to lead to false arrests and to embody severe manifestations of governmental arbitrariness. Likewise, it strikes a severe blow to the proper distribution of power among the three branches of government. By making it possible to withhold from suspects the evidence that led to their arrests, it seriously undermines the fundamental right of individuals to respond to the charges made against them in fair judicial proceedings. The Detention Act effectively allows the authorities to incarcerate a person for an extended and indefinite number of years without filing any charges. It lacks a clear-cut definition that adequately specifies the purpose of administrative detention. Finally, it does not mention any other more moderate legal tools that could achieve the security objective upon which the act is grounded.

These chapters also include a discussion devoted to the normative framework of the Detention Act – namely, the state of emergency in Israel as declared by the Knesset – which has negligible significance in the present reality since the declaration is automatically extended every year.

It is important to state at the outset that the number of administrative detentions under the act has been extremely small. However, in recent years, the proposal has been raised in Israeli public discourse to apply the Detention Act to at least two additional cases, which would greatly expand its use. In the first case, just prior to the implementation of the Gaza disengagement plan in 2005, the proposal was made to impose preventive detention against persons suspected of being liable to act aggressively toward the evacuating forces. On another occasion, it was proposed that the act be expanded to apply to individuals suspected of involvement in organized crime. These examples indicate that the Detention Act, in its present form, is a loophole begging to be exploited. It is an easy solution for law enforcement authorities, since it enables them to “forego” addressing the defensive arguments of the accused in criminal proceedings. Opening this door even slightly to expand the application of this legal arrangement runs the risk of nullifying longstanding, elementary principles of our democratic form of government. It is not hard to imagine what will happen if administrative detentions are more widely employed, and there is no need to reach that point in order to demonstrate the great injustice of maintaining an arrangement that makes it possible to strip individuals of their freedom without minimally fair judicial process.

Furthermore, the Detention Act deviates from Israel’s obligations under the International Covenant on Civil and Political Rights and is inconsistent with international law. It is unnecessary to elaborate on the resultant grave damage to Israel’s image, in the past as well as in the future. There is a clear trend in the international arena to intensify the isolation of states that (consistently) violate human rights laws, and Israel does not want to be counted among these states.

The third chapter of this study offers an analysis of international law along with solutions adopted throughout the years by other Western democracies. Over the course of time and particularly after the September 11 attacks, democratic states adopted ill-advised laws and practices that clearly reflected the panic that gripped them. In recent years, however, the pendulum has swung back and with the help of effective judicial oversight, each state has achieved a proper balance in dealing with terrorism without infringing the fundamental values of a liberal democratic society.

The time has come for the State of Israel to choose a more fitting legislative solution that will also reflect the changes in the attitude of the Knesset and Israeli society as a whole toward the basic rights of the individual, as well as the fundamental principles that have guided the State since its founding, including the heritage of the Jewish people, which recognizes the sanctity of human life and the importance of a fair trial for Jew and non-Jew alike.

I wish to propose the passage of a new law – the Emergency Powers (Protection of State Security and Public Safety) Act (as formulated in the Appendix) – in lieu of the Detention Act currently in effect. The proposed modifications are based on striking a different balance between the public interest in ensuring state security and public safety (whose importance should not be underestimated in a state locked in an endless struggle against terrorism within its borders) and the individual’s fundamental rights to freedom, dignity, and due process. The aim is to significantly reduce the legal potential to enforce administrative detentions, while at the same time reserving this power for cases of a highly exceptional nature in which it is crucial to deprive an individual of his or her freedom for a limited period in order to avert a threat to state security. In addition, I propose changes intended to eliminate the basic injustice inherent in the current detention proceedings. I believe that the proposed balance is fully compatible with the fundamental principles of the judicial system in Israel, as well as in conformity with international law.

The following conclusions address the existing provisions of the Detention Act and their shortcomings, and offer a proposal for a new set of laws:

It is incumbent upon us to assimilate the lessons learned throughout the world: the end does not justify the means, and not all actions can be justified in the name of security.

The war against terror cannot be waged with the same weapons used by terrorism itself, and therefore, a Jewish and democratic state must limit its use of force; otherwise, its core values, which are the basis of its strength, will be undermined.

Tags:
The Amnon Lipkin-Shahak Program on National Security and the Law,
Democratic Values and Institutions