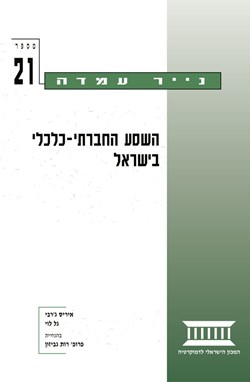 The Socioeconomic Divide in Israel

A description and analysis of the partial congruence in Israeli society between the socioeconomic divide – stemming from differential control by certain population groups over economic, social, and political resources – and other major rifts, such as the ethnic, national, and religious divides.

This paper examines the stratified structure in the State of Israel while focusing on the socioeconomic divide.

The discussion is based on existing research literature and on accumulated knowledge dealing with poverty, inequality in income and asset distribution, as well as gaps in education and employment.

The socioeconomic divide, stemming from certain population groups' differential control over economic, social and political resources, partially overlaps with other central divides in Israeli society, such as the ethnic, national and religious divides.

This paper will deal with this overlap and its implications. The socioeconomic reality may be described through two approaches. The first centers on the "poverty line," which creates a dichotomy in the country between the poor and the non-poor. According to this approach, the state is required to assure the individuals living in it of a security net in the welfare sphere. This is achieved through various income allowances or unemployment insurance.

In the 1950s and 1960s, a change occurred regarding the poverty issue and the absolutist approach was rejected. The assertion was that it is possible to suffice with ensuring a minimum necessary for living. Those demanding reform claimed that the needs of people living in a modern society are not constant and absolute – they are relative and connected with the society's standard of living (Doron, 84, 1995). This position too made a distinction between poor and non-poor, but its supporters recognized the dynamic nature of the poverty line, which changes from period to period, and from society to society. It is mainly concerned with identifying the poor population and developing a policy meant to reduce the number of poor.

The second approach focuses on measuring social inequality. This approach addresses the entire socioeconomic continuum and, by measuring the distribution of incomes in society as a whole, makes it possible to clarify the scope and intensity of the gaps between the various social groups. In this way, it becomes possible to learn not just about the poor, but also mainly about the degree of polarization between the weak and strong populations, and about the nature of the entire stratification. One of the accepted measurements in Israel for quantitatively assessing inequality is the Gini Index. By analyzing the index values over the years, it becomes possible to discern changing trends over time and to assess Israel's situation in relation to other countries. In this context, the impact of welfare policy, through the transfer payments system, and taxation policy on inequality in Israel is discussed.

The first section of this paper examines the subject using both approaches. First, the "poverty line" in Israel will be defined and the method of calculating it explained. Following that, data and assessments regarding the scope of poverty in Israel and its causes will be brought. These data will be examined through a comparison with Western European countries and the United States. Later, the changes in inequality trends in Israel will be discussed.

The second section deals with the connection between various characteristics of population groups being examined and their socioeconomic class. This is done by examining three central social axes: Ashkenazi/Mizrahi, Jewish/Arab and Secular/Religious. These axes will be examined by sub-cross sections of income, employment, housing and education. The findings reveal the degree of homogeneity regarding the socioeconomic characteristics of three population groups examined – Mizrahi Jews, Arabs and ultra-Orthodox Jews – and about the extent of their integration in Israeli society, e.g. about their relative position in the stratified structure.

It should be noted that the decision to focus on these axes left other social dichotomies outside the discussion, including women/men, adults/youth, veteran Israelis/immigrants, etc. Therefore, the second section focuses on the question of which populations are the dominant ones and which are subordinated. This question launches into moral issues dealing with social justice. It is therefore not surprising that interpretation of the data is both emotionally and politically loaded, and that it is in controversial. The liberal approach assumes that the distribution of individuals' abilities and talents in a population is unrelated to group affiliation. According to this approach, if the channels of mobility are equally open to all, this will create a random dispersal of various groups' representatives in various spheres of employment, degrees of professional responsibility, areas of residence, educational achievement, etc. Thus, even if there is no equality in the achievements of individuals, according to the liberal concept, an equal society's image is judged by opportunities, not by results.

In contrast, in an unequal society certain social groups have an especially high level of representation, over time, in inferior employment spheres and at junior levels, they tend to live in peripheral areas and their members' academic achievements are low. From this situation it is possible to conclude that discrimination exists – either intentionally or unintentionally.

It should be stressed, however, that the tendency of certain groups to live in distinct areas could be a result of social or cultural preference, and not necessarily of discrimination. According to the liberal approach, the basic assumption for examining inequality is that the state and the market are indifferent to characteristics of cultural affiliation and ethnic origin.

Thus, this approach tends to ignore the social role of the in-group in determining individuals' place in society when it examines their socioeconomic state. In this section, we will seek to uncover the patterns of inequality that exist in society, and from them to try to draw conclusions about the structure of opportunities in Israeli society. Special attention will be paid to the implications of individuals' belonging to certain social groups on the opportunities and possibilities open to them.

The third section reviews the literature dealing with the connection between class and voting and protest patterns. According to Lisk, "the existence of statistical correlations between low class, economic distress and a sense of social discrimination, against the backdrop of barriers to upward mobility, and ideological and political attitudes is a fairly widespread phenomenon." (Lisk, 146, 1993).

In light of the growing dimensions of unemployment and the widening social gaps, we will try to find an explanation in the research literature for the fact that the potential for social protest is not being realized. It should be emphasized that since this paper presents data from many different studies, it is impossible for it to address all of the arguments appearing in those works. Similarly, this paper does not presume to present a comprehensive or up-to-date situation of the reality being studied. It seeks to highlight the dominant trends that are being expressed in the different types of studies that occasionally even present different pictures of Israeli society.