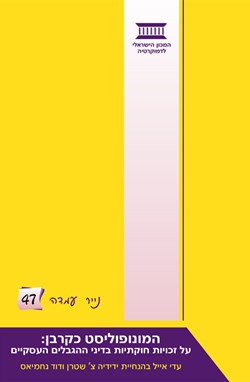 The Monopolist as Victim

Constitutional Rights in the Antitrust Law

This policy paper examines and offers solutions for resolving the problematic intersection between Israel’s Antitrust Law and its Basic Laws.

This position paper undertakes to debunk the perception that antitrust law is a field "for experts only," one that most legal scholars and practitioners avoid. It opens by surveying the assumptions upon which antitrust law is based, and explaining the intuitive foundation for perceiving the state as justifiably curtailing monopolists' activities. This innovative paper uses the same type of fairness arguments traditionally employed to protect consumers from monopolies to argue in the opposite direction and protect the monopolists as well. It also analyzes two basic laws – Human Dignity and Freedom, and Freedom of Occupation – to provide a firm constitutional basis for the protection of rights in antitrust. In addition, it details the statutory powers conferred upon the antitrust authority and its director in three spheres: restrictive arrangements, mergers, and monopoly regulation.

Antitrust law is often considered a field “for experts only,” one that most legal scholars and practitioners avoid. The reasons for this range from the specialized economic knowledge needed to assess the law and its implications, to the specific enforcement mechanisms devoted to antitrust alone (the antitrust authority, its director, and the antitrust court). While in recent years we have seen increasing interest in the impact on society of the problems caused by monopolies (due, in no small part, to the evolving world of software), the general view is that antitrust law pertains primarily to large businesses, and a minority of them at that. The antitrust authority is thought to protect “the little guy” from the monopolistic grasp of large economic predators. The commonly - held view is that antitrust law protects both economic efficiency (by ensuring competition) and the interest of fairness (by helping the weak against the strong).

This position paper undertakes to debunk this perception, in a number of ways. I open by surveying the assumptions upon which antitrust law is based, and explain the intuitive foundation for perceiving the state as justifiably curtailing monopolists’ activities. In antitrust law, fairness arguments are often relied upon to justify protecting the victims of monopoly (a term broadly construed to include consumers, competitors, local communities, and other constituencies). The thesis presented here is a counter-intuitive one – that the same notion of fairness calls for the protection of monopolists themselves, as well.

In the second section I analyze the two newest basic laws – Human Dignity and Freedom, and Freedom of Occupation – to provide a firm constitutional basis for the protection of rights in antitrust. While both monopolists and their victims have viable arguments for protection of their constitutional rights, the Restrictive Trade Practices Act is shown to be biased towards one side only: protecting the monopoly’s victims. While this is unquestionably a legitimate and worthy goal, the new Basic Laws are shown to encompass the rights of monopolists as well, and disallow the type of bias from which antitrust law currently suffers. The constitutional discourse created by the enactment of the new Basic Laws has yet to be seriously applied to the domain of antitrust, and this position paper seeks fill this important gap.

The rights protected by Basic Law: Human Dignity and Freedom and Basic Law: Freedom of Occupation, include the right to property, freedom of contract, and the freedom for self-determination of one’s business endeavors. While this is undisputed, it has have never before been argued that these rights include the monopolists’ right to maximize profit, including by methods disallowed by the Restrictive Trade Practices Act. Limitations to monopolists’ rights are undoubtedly necessary, yet current antitrust doctrine is misguided in its a priori preference of the victims’ side, as it creates an unbalanced approach to the detriment of monopolists. True, monopolists are generally much more powerful economically, necessitating state intervention on behalf of the victims, but legal empowerment of the state’s enforcement agencies reverses the balance of powers.

The third section details the statutory powers conferred upon the antitrust authority and its director in three spheres: restrictive arrangements, mergers, and monopoly regulation. In each of these spheres I will show that the broad statutory language allows for wide discretion, thus generating extensive powers of enforcement. Furthermore, those sections of the law outlining considerations that the antitrust director and court must address, specify only interests of the monopoly’s victims, altogether excluding the monopolists themselves as bearers of rights. The result is that instead of balancing the rights of all involved in an antitrust dispute, current antitrust law works to ignore the constitutional rights of one side – the monopolists.

While many have argued for the rights of a monopoly’s victims, this position paper innovates by using the same type of fairness arguments traditionally employed on behalf of consumers, to argue in the opposite direction. Constitutional scholarship is replete with balancing tests when the rights of two opposing groups countervail. The fact that one side is considered to be the culprit is not reason enough to ignore its protected rights – the goal is to balance accordingly. In antitrust this is decidedly not the case. Enforcement agencies rely on current doctrine to consider one side only, leaving monopolists to rely upon the goodwill and common sense of the antitrust director and members of the antitrust court, that they will give appropriate weight to monopolists’ rights.

The two new Basic Laws prohibit such a situation, voiding any law or state action that infringes upon protected rights unless they pass a "limitation clause," including four cumulative tests. The fourth section of this paper details these four tests, applying each in turn to the Restrictive Trade Practices Act. While the Act itself passes scrutiny on most counts, it is shown to be problematic with regard to the fourth test of excessiveness. Among other things, the broad illegality of unauthorized restrictive arrangements carries with it both criminal and civil ramifications that are difficult to account for, given the overreaching definitions employed. Implementing the excessiveness test demanded by the Basic Laws to antitrust doctrine requires the latter’s amendment, and accordingly the final section considers alternatives to that effect. Legislation is recommended, both to fully implement the new constitutional constraints on antitrust doctrine given institutional inertia, and to avoid judicial review that would ultimately force the same, though in a less predictable, ad-hoc manner.