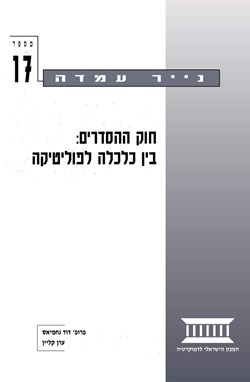 Between Economics and Politics

A policy paper that analyzes the historical background, benefits and drawbacks of the Economic Arrangements Bill. It also considers the bill’s role in the processes and transitions taking place in the Israeli political system, and includes recommendations for changes to the bill.

The Omnibus Law of Arrangements in the State's Economy was first enacted in 1985 as a supplement to the economic program for stabilizing the economy. The difficult situation of the Israeli economy at that time mandated an emergency program that contradicted in part existing laws and agreements in central sectors such as labor relations, wages and taxes In order to validate the legality of the economic program, the Government grouped a combination of laws and legislative adjustments in a number of different areas under one roof and brought them to the Knesset for approval en bloc. The Omnibus Law of Arrangements, which originated as an emergency law, has since that time become customary and is annually brought before the Knesset in tandem with the Budget Law.

The Omnibus Law of Arrangements is presented to the Knesset as a Government-sponsored law. The law is considered supplementary to the Budget Law and combines an assortment of laws and legislative adjustments that the Government deems it necessary for the Knesset to adopt and approve in order to enable it to carry out its policy and economic program.

The special structure of the Omnibus Law of Arrangements and its speedy and peculiar legislative process arouse strenuous criticism both within and outside of the Knesset. The criticism is focused on the political-civic and legal aspects; deviation from the norm of democratic governance that demands accountability, transparency and an effective system of checks and balances in public policy formation in general and in legislation in particular. Despite repeated criticism, to date no significant steps have been taken to rescind the law or to introduce qualitative changes in its makeup.

The Omnibus Law of Arrangements has not received worthy research attention. The reasoning for this is varied: the relatively short time period since it was first enacted; its positioning along the slippery boundary between politics, economics and law; and the assumption that it is nothing but a reflection of the structural difficulties in the political and economic system in Israel and not their cause. This position paper means to fill the research gap and presents the Omnibus Law of Arrangements, the background for its implementation, its uses, advantages, disadvantages and its place in the processes and changes now taking place in the Israeli political system. Likewise, the position paper suggests recommendations for changes and adjustments.

This position paper will try, therefore, to present a complex snapshot of influences and mutual influences and to look at the position and task of a law about which many of its initiators today testify that they had not imagined what would grow out of their handiwork.