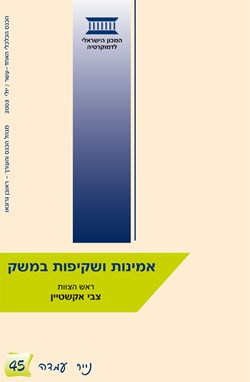 Credibility and Transparency in the Economy

A discussion of transparency (as a means of achieving credibility for a given policy) in the context of monetary policy, the Budget Law, public companies, and the Israel Securities Authority.

Credibility in the sense of economic considerations is a characteristic that expresses the attitude of the public (consumers, investors, etc.) towards decision-makers in the country’s influential institutions, such as the government, Bank of Israel, judicial system, commercial companies, and the like. Credibility is important because it is an essential part of the ability of these various institutions to implement the policies they have chosen to follow. Since the objective is to achieve the purpose of the policy, credibility is only one aspect of the implementation process. When discussing the issue of credibility we assume that each of the institutions actually has a policy it would like to implement, without having to discuss the policy itself. That is the goal of some of the other teams at different Caesarea Conferences.

Transparency is a means for achieving credibility regarding a given policy. This is because transparency reinforces the information the public possesses about the policy, reduces the uncertainty concerning the steps to be taken under different circumstances, and increases the public’s ability to understand the economic situation and assess the ability of the various institutions to function. It should be noted that under certain conditions and in some cases, such as when there is a disparity between the declared policy and the steps taken, different types of transparency can jeopardize credibility.

The team’s discussions focused on aspects of transparency in managing public institutions. In other words, we decided to limit the discussion and recommendations to aspects of transparency that we felt would help improve the ability of the Israeli public to understand the policies of the different institutions and judge their implementation. All this, without examining too deeply whether increased transparency would, in every situation, necessarily lead to greater credibility for policy-makers. That is, in all of the recommendations made below we believe that increased transparency will help increase the ability to implement a policy and thus, to reduce the level of uncertainty in the economy which, together, will improve the efficacy of our economic activity and contribute towards economic growth.

In order to focus the discussion on the main issues, we highlighted a small number of topics in three key institutions:

Below is a summary of the recommendations as they were made by the team members. The material in the following sections includes positions, background information and recommendations that were made during the discussions and constituted the basis on which we made the summary recommendations found later on in this section, but they are not necessarily accepted by the entire team.

The team recommends that as part of the new Bank of Israel Law, which has been under public discussion in recent years, the issue of transparency be given top priority, and will include the following components:

In a recently published document that compared the quality of writing and an overall assessment of the management of inflationary target policies, Israel came in at 12th place, slightly below average, with an overall score of 6 on a scale of 1 – 10 (10 being the highest score). In the opinion of most of the team, there is insufficient transparency in the management of the monetary policy and paragraphs 1-4 above, even at this point in time – with adjustments for the present legislative situation – could be adopted. It should be noted that paragraph 2 has already been adopted by the Bank of Israel and is now in force. The feeling that there is insufficient transparency stems from the fact that recent changes and adjustments to this policy are not understood by the public, since the model or methodological framework by which interest rates are set is unclear. This is in spite of the fact that the Bank of Israel publishes an inflation report every six months and the Bank of Israel report every year, and each month there is extensive public debate regarding the interest rate policy when the Bank of Israel publicizes the reasons behind its decision with regard to interest rates.

The inflation target policy adopted in Israel and the independent status of the Governor enable the Bank of Israel to achieve a high level of transparency and a good deal of credibility as well. Enhancing transparency in accordance with the above recommendations can go a long way towards improving transparency and credibility in all of our economic institutions. Since the Bank of Israel is run independently and very professionally, is should serve as an example to the entire private and public sector with regard to transparency. Therefore, it must take the steps that are possible and necessary even if, for various reasons, the law recommended by the Levine Committee does not successfully pass the legislative process.

The team recommends that the Bank of Israel, in its capacity as supervisor of the banks, and the government of Israel, in its capacity as insurer, should initiate legislation to define by law and other means, for the public in general and for the business sector in particular, the government’s lender-of-last-resort policy, as well as its deposit insurance policy. This transparency is necessary in order to enable us to reduce the amount of uncertainty in the economy regarding the economic significance of financial instability, and enable depositors and borrowers to know the risks involved in the economic activity of each bank. It should be emphasized that to date, the bank supervisor policy is not defined within the law, nor is it completely clear to the business sector. Furthermore, the degree of public trust regarding its deposits in the banks is based on the government’s behavior in the past, and there is no understanding regarding the degree of credibility this policy will generate in the future. The Bank of Israel has recently promoted legislation on the subject of deposit insurance, similar to the team’s recommendations.

The incident involving the Bank of Commerce and the lack of financial stability that has been a source of extensive public debate during the past year highlight the importance of legislation and greater clarity regarding the supervision and insurance policy that the government employs vis-a-vis its banking institutions. Transparency in these matters is an important source for reducing uncertainty in situations where significant economic shocks, combined with uncertainty regarding the state’s commitment, could lead to financial crisis. Such a crisis could probably be avoided if the rules of the policy were made clear. It would be best if we could, in any case, reduce the degree of risk for both the local and foreign public in the Israeli economy. This holds true even if we can always count on guarantees from the American government.

The degree of transparency needed in managing the lender-of-last-resort policy is complicated, due to the moral hazard problem. This means that a defined policy of guarantees by the central bank by granting short-term loans in order to avoid immediate harm to the depositors, and those who give and receive credit on the securities market, could be misused by taking unnecessary risks that do not correspond with efficient economic management. Nevertheless, the Bank of Israel and the government should consider means for informing the financial sector in particular, and the public in general, regarding the rules of the policy as they are accepted throughout the Western world and in Israel regarding the Bank of Israel’s role as lender-of-last-resort.

In the discussion that was held, serious arguments was raised concerning the information brought to the government and the public when submitting budget proposals or economic plans. The annual budget and economic plan documents do not even come close to the quality of the financial statements issued by public corporations in terms of transparency. Because there is nothing in the government, save for the issue of individual privacy, that demands the confidentiality required by public companies where competition abounds, we would expect the level of detail and transparency with regard to budgetary policy and economic plans to surpass that of financial statements prepared by public companies. It is important that budgetary policy be presented to the public in a manner that is open and unambiguous, which explains the economic policy and the financial numbers in aggregate terms that give them an idea of the economic picture, and at a level of detail that enables serious examination of the government’s activities.

In the discussion held among the team members, we agreed that the way the government, the Knesset and the public obtain information concerning the government budget, in the past, the present and in the future, is not transparent. On the basis of this consensus, and following a long debate, the team made the following recommendations:

Recommendations regarding public companies and the Securities Authority

The requirements of exposure, according to the securities laws for public companies, set forth a satisfactory level of transparency. In contrast with many other areas, the level of exposure required from public companies ensures that extensive information is given to the public and therefore, the proposals made below should be understood as proposals to improve a situation that is essentially good. The team’s recommendations based on the discussion in Section 4 are:

The topic of credibility and transparency in the economy has far-reaching ramifications throughout the economy. The recommendations presented above are based on three meetings of the team. The material appended to the recommendations was written by the team members within the short period of time the team had to complete its work. No doubt, a comprehensive paper could have been written on the economic importance of transparency and credibility in economic policy in general, and particularly regarding the subjects raised herein. These chapters certainly do not presume to exhaust, or even begin, the methodological discussion that is required.